The organization has devolved from skepticism toward government to veneration of politicians. 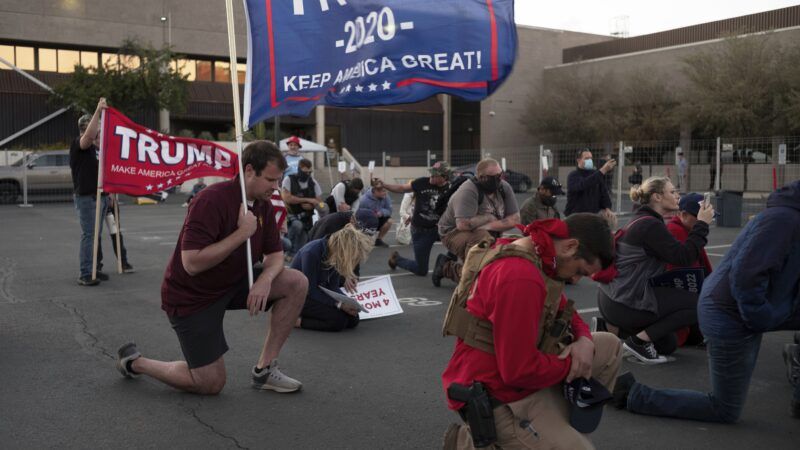 "He is with us," the speaker in the video urged viewers. "He loves the United States of America and he loves the American people. Have no doubt!" It was a performance worthy of an obscure religious TV channel stumbled upon during a late-night bout of insomnia, but it was actually a January 8 update from Arizona Republican Party Chairwoman Kelli Ward. She spoke in what she obviously assumed were reassuring terms of her conversation with President Donald Trump after the January 6 storming of the Capitol. "What an amazing president we have," she added, in a demonstration of the sad decay of the state's Republican organization from a political party into a cult of personality.

Once upon a time, the Arizona GOP nursed a distinctly individualistic skepticism of government and politicians. Long-time U.S. Senator Barry Goldwater famously wrote, "my aim is not to pass laws, but to repeal them." A hand-wringing September 2020 Kurt Anderson column in The New York Times held Goldwater responsible for introducing Milton Friedman's free-market economic ideas to a wide audience during events that "opened the door to libertarian economics."

Sam Steiger, a colorful five-term member of the House of Representatives, said there were some of his colleagues "you wouldn't hire to wheel a wheelbarrow." He ran for governor as a Libertarian in 1982, earning 5 percent of the vote. When he returned to the Republican fold to unsuccessfully seek the party's 1990 gubernatorial nomination, the Phoenix New Times noted that while he had backed off advocacy of drug legalization, Steiger "is an admitted 'Libertarian at heart.'"

Those were Republicans you couldn't really imagine assuring party faithful that a politician "loves" them. Grudging tolerance for an officeholder was more characteristic for their breed.

Since then, however, the Arizona GOP has undergone a strange transformation. It took a distinctly nativist and nationalist turn, best exemplified by Joe Arpaio, who held the office of Maricopa County sheriff for 24 years.

Where Goldwater promoted a Bracero-type temporary worker program to make illegal border crossings less tempting, and Steiger accused the Immigration and Naturalization Service of exaggerating illegal immigration in order to pad its budget requests, Arpaio made border enforcement the focus of his local law enforcement department. He went so far as to ignore a judge's order to stop detaining people his officers suspected of undocumented status—earning himself a conviction for contempt of court in the process. (Trump pardoned the former sheriff.)

Beyond Arpaio, the Arizona Republican Party tied itself to anti-immigrant sentiment, pushing through in 2010 a controversial law that allowed police to stop and question suspected migrants and requiring aliens to carry registration papers on them at all times. Much, though not all, of the law was declared unconstitutional, but the legislation still influences state political divisions and strongly colors perceptions of the GOP.

The anti-immigrant sentiments of SB 1070 were embodied on the national scene by Donald J. Trump's presidential campaign. "When Mexico sends its people, they're not sending their best," he claimed. "They're bringing drugs, they're bringing crime. They're rapists. And some, I assume, are good people."

That was too much even for Arpaio, who responded, "I don't think the majority of people from Mexico are rapists and murderers." But it struck a chord with Arizona Republicans, who delivered the state to Trump in 2016. Subsequently, Goldwater-esque Republican Sen. Jeff Flake declined to run for reelection when support within the party eroded over his opposition to "the transformation of my party from a party of ideas to a party in thrall to a charismatic figure peddling empty populist slogans," as he put it in a Washington Post essay.

Since then, the Arizona GOP has doubled-down on its break with its past, becoming not even a nationalist-populist party, but a cult-like vehicle for one man: Donald J. Trump. Even before party chairwoman Ward assured the faithful of the love of their leader, the party called upon its devotees for sacrifice. "He is. Are you?" the party's official Twitter account chimed in on December 7 after a "Stop the Steal" activist boasted "I am willing to give my life for this fight" in efforts to overturn Trump's election loss.

The party isn't yet entirely consumed by Trumpism. Arizona Gov. Doug Ducey, a Republican, has championed old-school issues such as school choice. He's been savaged by the usual suspects for his relatively light touch in terms of mandated restrictions and lockdowns in response to the pandemic. Ducey also appointed libertarian legal scholar Clint Bolick to serve on the Arizona Supreme Court.

But the governor's defense of the integrity of the state's voting process won him a juvenile slap from Kelli Ward, who tweeted #STHU (shut the hell up) at her party's own elected official. Ward had unsuccessfully challenged the vote tally after the presidential election.

The Arizona Republican Party's transformation into a Trumpist cult isn't just antagonizing a governor elected from its ranks, it's eroding the organization's support by alienating whole segments of the population. After Flake decided against running for reelection, his former seat went to Democrat Kyrsten Sinema in 2018. Democrat Mark Kelly defeated incumbent Trumpist Republican Martha McSally (who was appointed) for the other seat in 2020. And, in a squeaker of a vote, the state's electoral votes went to Joe Biden in the latest presidential contest.

"A big factor in this slippage of political fault lines has been the mobilization of the state's growing Hispanic population and other communities of color by grassroots organizations, led by mostly young local organizers," notes IPS News. "Over the past decade, Hispanic groups have grown strong by pushing back against the free-range bigotry and nativism of the state's Republican establishment."

Libertarian Jo Jorgensen's vote total far exceeded the razor-thin margin between Biden and Trump in November—an election in which voters also overwhelmingly legalized recreational marijuana. That would seem to indicate a path for reviving the Goldwater/Steiger individualist tradition in state politics—except that Arizona Republicans already anticipated that threat. In a 2015 move overtly intended to keep Libertarians off the ballot, lawmakers hiked access hurdles for aspiring candidates from a couple of hundred signatures to several thousand.

"If we're not on the ballot, we're going to all vote Democrat," Libertarian activist Barry Hess snapped in response. "Screw them!"

Probably less from libertarian disgust than because they've wandered down the dead end of political cultism, Republicans in Arizona do look screwed. Whether they can unscrew themselves after the object of their veneration has been ejected from national politics is anybody's guess.