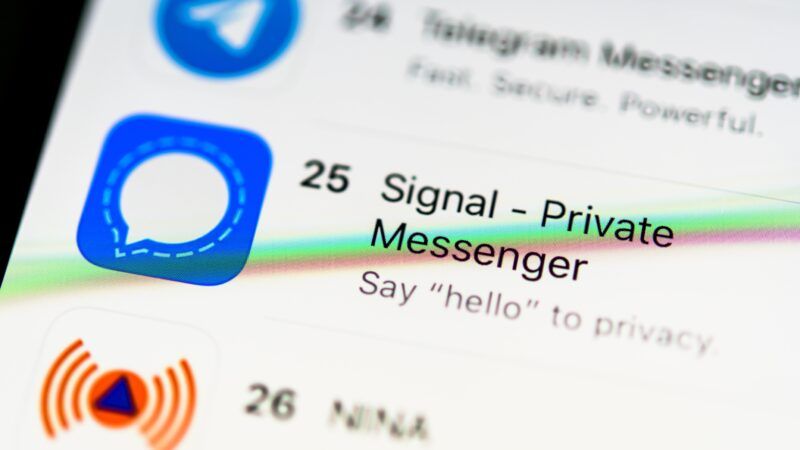 Encrypted apps are seeing a surge in downloads, with Signal installs reaching a record high for the company. "Signal saw approximately 7.5 million installs globally through the Apple App Store and Google Play store between Jan. 6 and Jan. 10," notes CNBC. "That's 43 times the number from the previous week. It is [the] highest week or even monthly install number for Signal in the app's history." Over the same period, 5.6 million people reportedly downloaded Telegram.

These are global download numbers, so we should be careful assigning a too United States-centric cause for them. But the U.S. alone provides multiple plausible reasons why more people might be turning to the privacy of encrypted chats like Signal and Telegram.

Twitter has been booting a ton of accounts in the past week (including @RealDonaldTrump). Many mainstream social media platforms have been extra jumpy about potential conspiracy theories and misinformation, and Parler is temporarily down after Amazon canceled its web hosting account for allegedly not cracking down on this sort of content enough. Meanwhile, federal agencies, local cops, members of the media, and citizen spies have all been combing social sites for evidence of involvement in the Capitol riot or future far-right organizing. Is it any wonder people might be fleeing for less public (and less accessible to officials, even with a court order) alternatives?

And does anyone think the Capitol and U.S. statehouses are now safer, QAnon conspiracies less likely to flourish, or election fraud fever dreams less likely to stir action now that they've been driven to less visible platforms with a smaller chance of pushback from dissenting voices, outside discovery, or platform moderation?

"On Telegram, where members of the Proud Boys and other militia groups host popular channels, there have been calls for people to organize for marches on state capitol buildings on Saturday (Jan. 16)," notes The New York Times:

On one Telegram channel, which has over 20,000 followers, addresses were posted for those buildings, as well as the addresses for tech companies, including Facebook, Twitter, Apple and Google.

Members of the Boogaloo movement, another far-right group, have also organized on Telegram and Signal for rallies on Sunday (Jan 17). On 4chan and other messaging groups fliers were posted calling for another march on Washington, D.C., on Jan. 20. In comments under those posts, people have voiced support for targeting various news organizations like The New York Times and CNN.

Encrypted platforms certainly aren't just for people plotting something nefarious, of course. The apps are very popular among journalists. They're an economical alternative to text messaging for people with international contacts. And so on.

There are all sorts of benign reasons why these apps might be experiencing a surge right now in particular. For instance, users are reportedly fleeing Facebook-owned WhatsApp over concerns about the company's privacy policy changes.

Other platforms are losing users due to state censorship and meddling.

WeChat—an app immensely popular in China and among Chinese immigrants elsewhere—is also suffering from a host of issues, including alleged shadowbanning on behalf of Chinese state forces and a simultaneous attempt by the Trump administration to ban it from the U.S.

The situation shows the futility of trying to fix social and political issues by threatening tech platforms that won't hide evidence of them. The issues and the ideas driving them don't go away, they just go underground. And the only way to reach them there is to undermine privacy protections for political dissidents from authoritarian regimes, journalists, whistleblowers, all sorts of political organizers, and literally everyone else in the process.

Tamika Spellman, a policy and advocacy associate with HIPS, says her worst interactions while she was a sex worker were with the police.

"Everywhere that I have been across the country I have been sexually assaulted by the police," says Spellman, who is Black and transgender. "It was more frequent here in the District of Columbia."

"Sex work needs to be decriminalized," she says. Without doing so, she adds, "violence flourishes."

The Supreme Court has rejected more challenges to the 2020 election results:

The U.S. Supreme Court on Monday steered clear of more cases involving bids by President Donald Trump and some Republican allies to overturn his election loss and turned away a Democratic effort to expand mail-in voting in Texas.

The justices, as expected, declined to expedite consideration of eight Trump-related cases including three filed by his campaign challenging the election results in Wisconsin and Pennsylvania, two of the states he lost to Democratic President-elect Joe Biden. It already was clear that the court had no intention to intervene because it had not acted before Congress last week certified Biden's victory in the Nov. 3 election.

Tomorrow morning, Marshall Burt will be sworn into the Wyoming State House -- the first Libertarian elected to a state house since the 90s. Congratulations Marshall, and congratulations Wyoming!