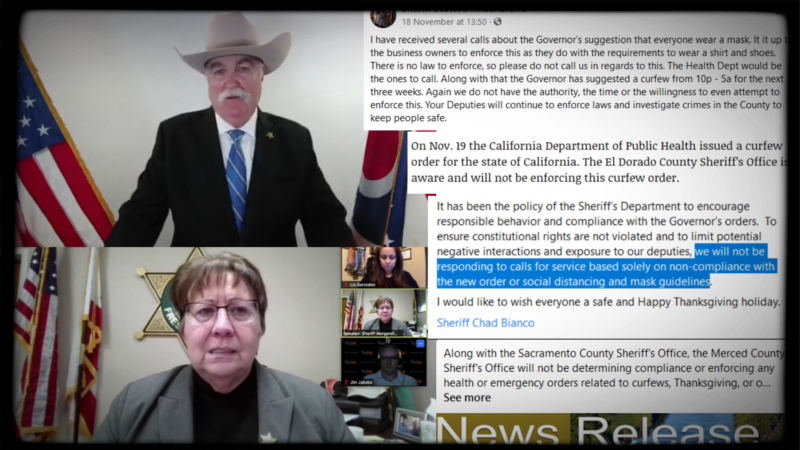 (screenshots from sheriffs statements and broadcasts)

California curfew starts Saturday. As expected, California Gov. Gavin Newsom has announced an overnight stay-at-home order, telling residents to curtail nonessential activities between the hours of 10 p.m. and 5 a.m. from this Saturday through December 21. California follows in the footsteps of New York, Ohio, and Oklahoma.

Though it will not cover the whole state, the new directive applies to all counties in California's pandemic purple tier—the color representing the most severe outbreaks—and effectively covers most of the state's population. "Roughly 94% of Californians—37 million people—live in counties that are in the purple tier," reports the Los Angeles Times. "The state has reported an average of more than 10,000 new cases each day over the last week," the paper notes.

But not all local law enforcement authorities in California are on board. A number of county sheriffs say they won't enforce the curfew orders.

"On Nov. 19 the California Department of Public Health issued a curfew order for the state of California. The El Dorado County Sheriff's Office is aware and will not be enforcing this curfew order," the office said in a statement.

Fresno County Sheriff's Office followed suit. "We're not gonna make criminals of normally law-abiding citizens," Sheriff Margaret Mims said at a press conference yesterday. "I haven't seen any data for instance that shows that between the hours of 10 p.m. and 5 a.m., that things happen that cause a big spread of COVID."

Neither Merced County nor Sacramento County sheriffs plan to enforce the order.

"The Sacramento County Sheriff's Office will not be determining—including entering any home or business—compliance with, or enforcing compliance of, any health or emergency orders related to curfews, staying at home, Thanksgiving or other social gatherings inside or outside the home, maximum occupancy, or mask mandates," said Sheriff Scott Jones in a statement.

"The Merced County Sheriff's Office will not be determining compliance or enforcing any health or emergency orders related to curfews, Thanksgiving, or other social gatherings inside or outside the home, maximum occupancy, or mask mandates in Merced County," the sheriff's office wrote on Facebook.

In the Coachella Valley, many departments are unsure as of yet how to handle it. But Riverside County Sheriff Chad Bianco wrote on Facebook:

It has been the policy of the Sheriff's Department to encourage responsible behavior and compliance with the Governor's orders. To ensure constitutional rights are not violated and to limit potential negative interactions and exposure to our deputies, we will not be responding to calls for service based solely on non-compliance with the new order or social distancing and mask guidelines.

San Jose Inside reports that in Silicon Valley, city police departments say they have similar plans:

Mountain View Police Department spokeswoman Katie Nelson said that "much like with previous state stay-at-home orders, and other county public health mandates, [MVPD] will continue to take an educational approach."

San Jose Police Department spokesman Sgt. Christian Camarillo said his agency would take a similar tack instead of issuing citations. "In addition, we will not be utilizing this curfew as probable cause to detain persons during the curfew hours," he assured.

Some sheriffs in Ohio are also resisting enforcement of the state's 10 p.m. to 5 a.m. curfew, which began yesterday.

"It is up to the business owners to enforce this as they do with the requirements to wear a shirt and shoes," Geauga County Sheriff Scott A. Hildenbrand wrote on Facebook.

In Butler County, just north of Cincinnati, Sheriff Richard K. Jones said earlier this week: "I'm not going to have my employees go out and make arrests, or stop people." He continued, "People are angry, and I don't care what the governor says, somebody will disobey or run. Bad things will happen from this curfew."

"How do you stop someone at 11 o'clock at night and then they say we're going to McDonald's? How do you enforce that?" said Newtown police Chief Tom Synan. "We have no intention of enforcing the curfew. We're not going to be out there stopping cars. There's not going to be roadblocks."

[…] Fairfield police Chief Steve Maynard wrote on the department's Facebook page "We support the efforts of the governor's office to manage this matter, however, it places an undue burden on the already stretched resources of our department. That said, we will not be actively looking for violations of the order."

Ohio Gov. Mike DeWine is facing some pushback from his state legislature:

In a party line vote, House Republicans passed Senate Bill 311, which prohibits the Ohio Department of Health from issuing statewide and regional quarantine or isolation orders to people who haven't been infected or exposed to disease. The Senate passed the bill in September.

It would also allow lawmakers to pass a resolution to rescind ODH orders like the statewide mask mandate.

Biden will be certified as the victor in Georgia. The state's hand recount of ballots is finished, and Joe Biden has still won.

Alaskans approved ranked-choice voting, in which voters don't just choose their single top candidate but rank their top choices. "Measure 2 makes sweeping changes to how Alaska administers elections. Instead of two primaries, in which each political party nominates a candidate for the general election in November, the state will hold one open primary from which the top four candidates, regardless of party affiliation, proceed to the general election," notes Vox.

Read more on the shift from Reason's Scott Shackford, who also notes the fate of ranked choice voting initiatives in Maine and Massachusetts, as well as a new election experiment in St. Louis:

A different type of election will be introduced in St. Louis, again thanks to the result of a local ballot proposition. Proposition D will bring approval voting to primaries for local city offices. In approval voting, voters don't need to choose just one candidate, nor do they rank the candidates. Instead, they can simply vote in favor of each candidate they like and would accept to that office. Then the candidate with the most approval votes wins.

In St. Louis, by a vote of 68 percent, citizens agreed to implement a system of approval voting for the March primaries for city elections. In the primary, voters will choose however many candidates they approve of for each office. The top two vote-getters will then face off in the April vote in a more traditional runoff election.

A positive side effect of the pandemic? This past year has brought a huge reduction in greenhouse gas emissions. "Carbon dioxide emissions from the US economy are nose-diving this year to a level not seen since 1983, according to new estimates by BloombergNEF," notes The Verge. "The planet-heating pollution is on track to fall by 9.2 percent from last year, which the private research organization says would be the biggest reduction on record." Emissions are expected to be down 7 percent globally.

Facebook faces a major attack by attorneys general and the DOJ. Following a civil suit against Google by the U.S. Department of Justice (DOJ) and a slew of Republican attorneys general, an even bigger (and bipartisan) group of authorities is planning to target Facebook on similar grounds:

The Federal Trade Commission and a bipartisan group of dozens of state attorneys general are in the final stages of filing one or more major antitrust complaints against Facebook Inc in early December, according to four sources familiar with the situation.

FTC staff undertaking a probe of the company has recommended to commissioners that they sue the social media company in federal court, which would allow the group of states, led by New York, to join the lawsuit, according to one source.

Orlando Hall was put to death by lethal injection just before midnight, about an hour after the Supreme Court cleared the way for the execution to take place. Full story from @katiebarttt on the emergency appeals that culminated at the court on Thursday:https://t.co/tRb9R240pp

• Oregon Democratic Rep. Peter DeFazio and Arizona Republican Rep. Andy Biggs "are expected to introduce a resolution in the House this week that calls for an end to US involvement in the war in Yemen," reports Antiwar.com. See a draft of the bill here.

• A third of the Cincinnati City Council has been arrested on bribery charges in 2020.

… what we are seeing now, in the twilight of Trump's kookery, is the merger of QAnon, the Republican Party, and the large part of the conservative movement that earns its bread by peddling miracle veggie pills to gullible elderly people on the radio. When I first starting writing about QAnon, some conservatives scoffed that it wasn't a significant phenomenon, that it had no real influence on the Republican Party or conservative politics. That is obviously untrue. Rather than ask whether conspiracy kookery is relevant to Republican politics at this moment, it would be better to ask if there is anything else to Republican politics at this moment. And maybe there is, but not much.

• In Minnesota, a new executive order from Gov. Tim Walz declares that "except as specifically permitted in this Executive Order, social gatherings are prohibited. […] Organizers of prohibited social gatherings may be subject to appropriate enforcement action by city, county, and/or state authorities." Drive-in gatherings and activities deemed essential (work, child care, etc.) are permitted. Walz's order also nixes many outdoor recreational activities, saying "individuals must not engage in outdoor recreational activities where they will come into close proximity with others from different households."