It's hard to take seriously complaints that there are no alternatives to Facebook when they're made on Twitter. 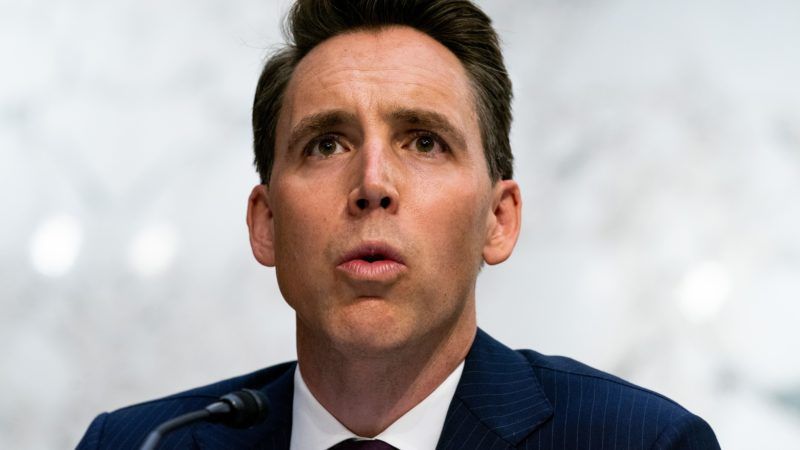 Few prominent political arguments have been so nakedly self-refuting as the conservative case for antitrust action against big tech.

The argument typically goes something like this: Big tech has too much power, and social media companies like Facebook use that power to shape and stifle political debates, censoring conservatives and conservative speech in ways that are both visible and invisible. They are not neutral actors but partisan boosters, and their sheer size means they must be reined in.

As Sen. Josh Hawley (R–Mo.) put it on Fox News last night, following yet another congressional hearing featuring Facebook CEO Mark Zuckerberg and Twitter chief Jack Dorsey, "These are the most powerful companies we've seen in American history. They're the most powerful companies in the world. And it's time we took them on." Hawley, the right's foremost critic of big tech, has repeatedly called for taking antitrust action against Facebook, arguing that it represents a monopoly. Facebook, he said in October, "is a lot like a supermarket…except there's only ONE supermarket in town, and they decide who can and can't shop."

Facebook, in Hawley's telling, is the only online venue for political speech. There are no other options. There's no place else to go to share your political views, especially if you're a conservative.

Yeah, sure, @Facebook is lot like a supermarket … except there's only ONE supermarket in town, and they decide who can and can't shop. That's what we call a monopoly https://t.co/3ibKcPGPYE

This blistering self-own was not some one-time tactical misstep on Hawley's part: He has repeatedly called for antitrust action against Facebook on the grounds that as a monopolist, the social media company exerts a de facto censorship power over conservative speech, and he has repeatedly done so on rival social media platform Twitter.

Hawley's Twitter-based attempts to establish that Facebook is the only game in town for political speech have in fact established precisely the opposite. There's obviously a competitor. He's using it.

This is roughly the quality of conservative gripes against big tech: Far from being overtly hostile to conservative speech, Facebook has actually become a haven for right-of-center media, with conservative outlets regularly dominating charts of the site's best performing content. That proved especially true in the run-up to the election. As Politico reported in September, "the Facebook posts with the most engagement in the United States most days—measured by likes, comments, shares, and reactions—are from conservative voices outside the mainstream media." President Donald Trump's personal page also regularly topped the Facebook charts.

As for Twitter, Hawley warned in June (again, on Twitter) that "Twitter's 2020 election interference will eventually end in banning Trump." Yet the election has come and gone, and President Trump is arguably still Twitter's most prominent and provocative user, with 88 million followers and a massive secondary media infrastructure devoted to amplifying and arguing with his every word. The company has taken to appending warnings to his (largely false or misleading) tweets about election fraud, but he continues to use the platform to widely disseminate his views.

The proximate cause for yesterday's hearing, meanwhile, was a pre-election New York Post article alleging connections between President-Elect Joe Biden and his son Hunter's work with foreign governments. Facebook throttled sharing of the article, while Twitter blocked it altogether—a mistake, in my view—leading to accusations that the company had censored the story.

At yesterday's hearing, Sen. Lindsey Graham (R–S.C.) riffed on this idea, griping about the decision to limit sharing of the Post piece. "What I want to try to find out is, if you're not a newspaper at Twitter or Facebook, then why do you have editorial control over the New York Post?" he said. "They decided, and maybe for a good reason, I don't know, that the New York Post articles about Hunter Biden needed to be flagged, excluded from distribution, or made hard to find. That to me seems like you're the ultimate editor."

Again, it's a strange accusation that seems to willfully misunderstand what sort of power a newspaper editor has.

The New York Post published the Hunter Biden piece. It remained available on The New York Post's website, and in the pages of its print edition, at all times. No one from Twitter or Facebook usurped the power or authority of the Post's editors, writers, or publisher; the newspaper's editors remained in complete control of their own publication's editorial decisions. The article remains easy to access for anyone with an internet connection—on The New York Post's website, which New York Post editors, rather than Facebook or Twitter moderators, continue to control. They, not social media overlords, were the ultimate editors of their own publication.

Fatuous antitrust arguments are not solely the domain of the right. At yesterday's hearing both Sens. Richard Blumenthal (D–Conn.) and Amy Klobuchar (D–Minn.) also brought it up, with Blumenthal warning the two CEOs that they had "built terrifying tools of persuasion and manipulation with power far exceeding the robber-barons of the Gilded Age," and Klobuchar accusing Facebook of having "damaged the ability of…small businesses to compete." Perhaps Facebook has a rival in Twitter, but with both so entrenched, would an upstart competitor really stand a chance?

As it happens, an upstart rival is rapidly gaining a foothold at this very moment: Parler, a conservative social media platform with Twitter-like functionality, which launched in 2018 and has reportedly gained millions of new users in just the last few weeks. In the days after the election, Parler became the number one app downloaded on Apple's App Store. Its existence and growing success refute both Klobuchar's accusations and Hawley's dire warnings about left-leaning social media companies controlling online political discourse; to recycle Hawley's metaphor, there's clearly more than one supermarket in town.

In some ways, however, this is all beside the point. Listen closely to the complaints from politicians on both sides of the aisle, and it becomes clear that the real underlying concern here isn't really about monopoly or censorship or a healthy marketplace. But it is about competition—not with other companies, but with the government itself.

That idea was inherent in Blumenthal's statement that he has urged "a break-up of tech giants because they've misused their bigness and power," and it was even plainer in Graham's opening statement, which included the following lament: "I don't want the government to take over the job of telling America what tweets are legitimate and what are not. But when you have companies that have the power of government, have far more power than traditional media outlets, something has to give."

Hawley's Fox News rant closed on the idea that "we the people" need to use antitrust in order to take power over large tech companies that exercise a dangerous amount of control over the country. As is typical of anti-tech populist rallying cries, it managed to wildly oversell the practical power that social media companies actually exert. (Remember Cambridge Analytica?) On the other hand, it was a very frank articulation of Hawley's view that big tech's power is a threat to his own, and that his real goal is to claw some of it back. If nothing else, you can presume that, in this case, "we the people" means senators with last names like Graham, Blumenthal, and Hawley.