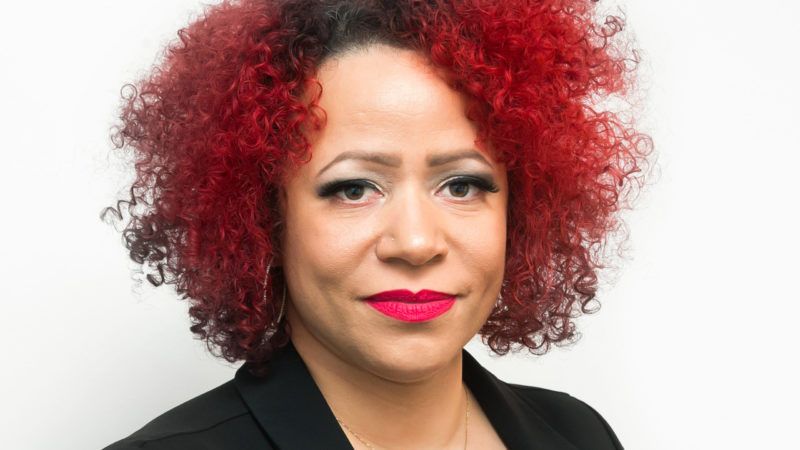 The 1619 Project is The New York Times' Pulitzer-winning effort to put racism and slavery at the center of the conversation about American history. The newspaper published a series of articles in August 2019—the 400th anniversary of slavery's introduction to the English colonies in the Americas—that reframed the year 1619 rather than 1776 as the true founding of America.

It's a provocative claim, and it came under serious criticism, along with other aspects of the project. But the project's lead author, Nikole Hannah-Jones, is now asserting that she never made it and that anyone who believes otherwise was fooled by bad-faith right-wing critics.

"One thing in which the right has been tremendously successful is getting media to frame stories in their language and through their lens," wrote Hannah-Jones in a subsequently deleted tweet. "The #1619Project does not argue that 1619 is our true founding. We know this nation marks its founding at 1776." She made a similar statement on CNN as well.

But as The Atlantic's Conor Friedersdorf exhaustively demonstrated in a series of tweets, this is simply not true. The 1619 Project was absolutely promoted—by the Times, and by Hannah-Jones herself—as an effort to recast 1619 as the year of the country's founding. On the newspaper's website, a special interactive version of the project was introduced in the following manner (emphasis mine):

The 1619 project is a major initiative from The New York Times observing the 400th anniversary of the beginning of American slavery. It aims to reframe the country's history, understanding 1619 as our true founding, and placing the consequences of slavery and the contributions of black Americans at the very center of our national narrative.

Both conservative critics and progressive fans of the 1619 Project described it this way, because that's how the Times itself described it.

The original description no longer appears at nytimes.com. At some point, it was edited to read:

The 1619 Project is an ongoing initiative from The New York Times Magazine that began in August 2019, the 400th anniversary of the beginning of American slavery. It aims to reframe the country's history by placing the consequences of slavery and the contributions of black Americans at the very center of our national narrative.

This may be a more accurate description of the project, and it's certainly a less controversial claim. But it's plainly different from the original, which means this is an unacknowledged edit—a major transgression of basic norms of journalism (albeit one that happens in major newspapers with some frequency).

Theoretically, it could be the case that the Times characterized the project using language that clashed with Hannah-Jones' own vision. But Hannah-Jones repeatedly used the same phrasing:

How do you call other people liars who repeat an easily falsifiable claim when you have characterized the matter this way? pic.twitter.com/tXdbsGqeA2

Writing for Quillette, Phillip Magness, a senior fellow at the American Institute for Economic Research and the author of The 1619 Project: A Critique, argues that this dispute has "come to symbolize the Times's blurring of historical analysis with editorial hyperbole." Magness's other criticisms of the 1619 Project have been much more consequential: He and other historians have pointed out significant flaws with the lead essay's thesis that the preservation of slavery was a major reason for the American Revolution—an idea the project's own fact-checkers disputed prior to publication—and he has also offered withering criticisms of an article's economic arguments about slavery.

All these arguments matter outside the world of journalism. The 1619 Project is being taught in U.S. schools, and President Donald Trump has waded into the debate in a characteristically clumsy fashion: declaring a federal initiative to "promote patriotic education" as a corrective. (As always, the best course here is to give families more control over kids' education options: Kids should neither be forced to read the 1619 Project nor forbidden from doing so.)

In any case, that the Times' major effort to reframe American history was itself reframed to suit the Times' purposes after mistakes were identified does not inspire tremendous confidence in the work—Pulitzer Prize notwithstanding.