The FIRST STEP Act Has Reduced Prison Terms for More Than 7,000 People

While that's nothing to sneeze at, it is a modest accomplishment in the context of a federal prison system that keeps more than 150,000 Americans behind bars. 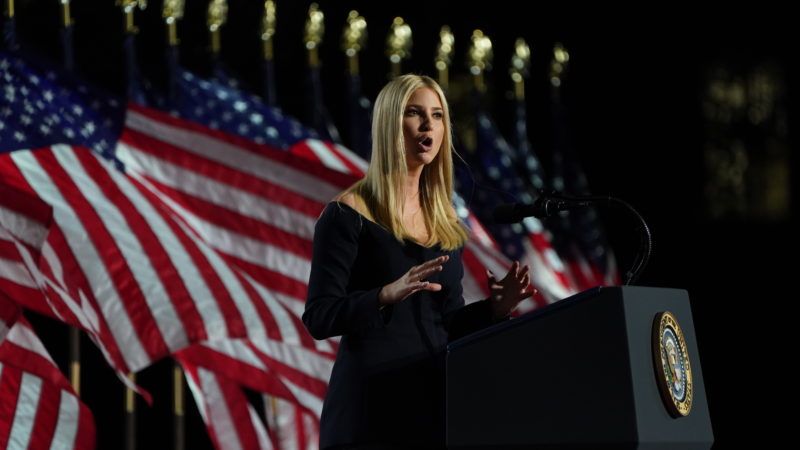 The Republican National Convention last month highlighted Donald Trump's support for the FIRST STEP Act, a 2018 law that Ivanka Trump, the president's daughter, called "the most significant criminal justice reform of our generation." A new report from the U.S. Sentencing Commission (USSC) describes what that reform has accomplished so far: During the first full calendar year in which the law applied, it resulted in shorter sentences for more than 4,000 drug offenders. While that is nothing to sneeze at, it is a modest accomplishment in the context of a federal prison system that keeps more than 150,000 Americans, including more than 68,000 drug offenders, behind bars.

The FIRST STEP Act sentencing reform with the biggest impact in 2019, measured by the number of people affected, was retroactive application of the lighter crack cocaine penalties that Congress approved in 2010. Congress raised the mandatory-minimum weight thresholds, moving them closer to the thresholds for cocaine powder while maintaining a still irrational and unjust 18-to-1 ratio (down from 100 to 1). In 2019, the USSC report says, 2,387 already imprisoned crack offenders qualified for shorter sentences under the FIRST STEP Act's retroactivity provision. The average reduction was 71 months, making the average sentence for this group 187 months (more than 15 years), down from 258 months (more than 21 years).

The second most significant FIRST STEP Act sentencing reform in 2019 (again, measured by the number of people affected), was its widening of the "safety valve" that allows low-level, nonviolent drug offenders to avoid mandatory minimums they otherwise would receive. The USSC reports that 1,369 defendants benefited from that expansion in 2019. The average sentence for that group was 53 months (more than four years), compared to 36 months (three years) for defendants who already were eligible for the safety valve. The average sentence for federal defendants who receive mandatory minimums, based on data for fiscal year 2016, is 138 months, or more than 11 years.

Even rarer were situations where defendants received shorter sentences because of the FIRST STEP Act's changes to a law that imposes escalating mandatory minimums on drug offenders who have firearms. The USSC says 205 defendants benefited from that provision in 2019, receiving sentences of five, seven, or 10 years rather than the 25-year sentence that previously would have applied.

The law also expanded the "good time" credits that allow prisoners to be released early. Although the USSC report does not analyze the impact of that provision, the Justice Department reported last year that more than 3,100 prisoners had benefited from it.

By the end of last year, then, more than 7,000 people either had been released from prison earlier than they otherwise would have been or were serving sentences that will end sooner than would have been the case before the FIRST STEP Act took effect. That is a meaningful accomplishment. Thousands of people will spend less time behind bars, and more time with their families, friends, and neighbors, thanks to this law, and that number will rise each year.

At the same time, the law's beneficiaries at this point represent less than 5 percent of the federal prison population, less than 11 percent of drug offenders in federal prison, and less than 10 percent of federal criminal cases each year. And while a crack offender who serves 15 years rather than 21 years in prison surely is better off, the reduced penalty is still draconian, especially if you think peaceful transactions involving arbitrarily proscribed intoxicants should not be treated as crimes to begin with.

Even leaving aside the moral bankruptcy of drug prohibition, the FIRST STEP Act fell far short of reforms that have gained bipartisan support in Congress. In addition to making shorter crack sentences retroactive and widening the safety valve, the Smarter Sentencing Act, which was introduced by Sens. Richard Durbin (D–Ill.) and Mike Lee (R–Utah) in 2014, would have cut mandatory minimums for drug offenses in half. That bill passed the Senate Judiciary Committee with the support of three Republicans and 10 Democrats. The Justice Safety Valve Act, which Sens. Rand Paul (R–Ky.) and Pat Leahy (D–Vt.) introduced around the same time, would have gone further, making mandatory minimums effectively optional by allowing judges to depart from them in the interest of justice. Joe Biden, Trump's Democratic opponent in this fall's presidential election, likewise favors abolishing mandatory minimums, along with the distinction between the smoked and snorted forms of cocaine (both of which he supported as a senator).

As its name indicates, the FIRST STEP Act, which passed the House and the Senate with overwhelming support, was not meant to be the last word on criminal justice reform. "We're just getting started," Ivanka Trump promised at the Republican convention. Now is the time to spell out what that means.