There were four times as many incidents of physical restraint against students the year after Florida doubled the number of police in its schools. 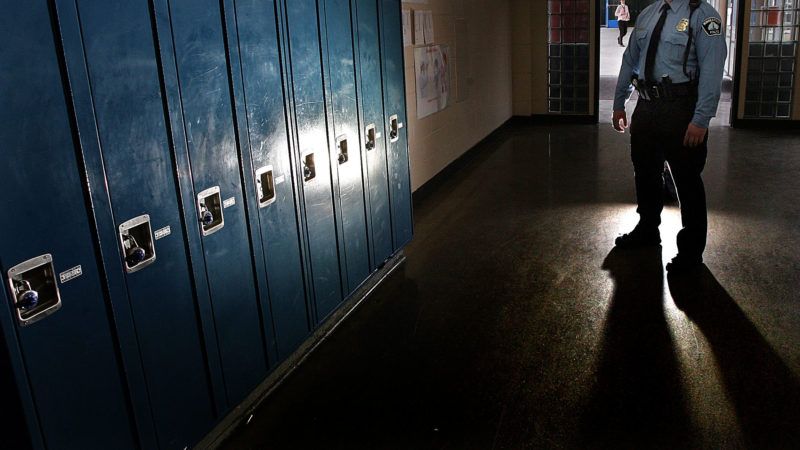 In 2018, Florida schools saw a hiring surge for police officers. As a result, a new study says, the number of school arrests—which had been declining for years—suddenly started to rise. There was also a sharp increase in the use of physical restraint against students.

The study was conducted by F. Chris Curran, director of the Education Policy Research Center at the University of Florida. It comes as school districts across the country, reponding to demands for policing reforms, are reconsidering the use of school resource officers (SROs).

Florida in particular has rapidly increased the number of police patrolling its school hallways in the last two years. After the 2018 mass shooting at a high school in Parkland, the state legislature passed a law requiring every K–12 school in the state to have a police officer or armed guardian. The law more than doubled the number of SROs in Florida schools. The majority of those new hires were assigned to elementary schools.

Florida has also been the site of several recent viral videos of small children being arrested. Last month, body camera footage emerged showing officers in Key West, Florida, trying and failing to handcuff an eight-year-old boy, whose wrists were too small for the cuffs. An Orlando SRO made headlines last September when he arrested a six-year-old girl.

As Reason reported in June, civil liberties groups and disability advocates have been warning that the hiring surge has led to a disturbing number of arrests of children. The new study bears out at least some of their concerns. It found that the presence of SROs "predicted greater numbers of behavioral incidents being reported to law enforcement, particularly for less severe infractions and among middle schoolers." While overall youth arrests in the state declined by 12 percent, the number of youth arrests at school increased 8 percent.

The study reported that police arrested elementary-aged children 345 times during the 2018–2019 school year. It also found four times as many incidents of physical restraint in 2018–2019 as there were in the previous year.

Groups like the American Civil Liberties Union (ACLU) and Southern Poverty Law Center (SPLC), have long contended that SROs contribute to the "school-to-prison pipeline" and lead to more arrests and harsher discipline, especially against minority students and students with disabilities. The study found that the increase in arrests was mostly attributable to increases in arrests of white students, while arrests of black students continued to decrease, though blacks are still disproportionately represented among student arrests.

The study's conclusions broadly track with recent findings by researchers at the University of Maryland and the firm Westat, who studied several dozen middle and high schools in California and found that that increasing the number of SROs led to both immediate and persistent increases in the number of drug and weapon offenses and the number of suspensions and expulsions of students.

The SPLC and ACLU are calling on the state to repeal the 2018 law mandating SROs in every school.

"Florida is failing to meet the needs of its students," Michelle Morton of the Florida ACLU said in a press release. "The security measures implemented by our state due to the fear of mass shootings have created school environments that are not conducive to learning."