A Vote for Joe Biden Is a Vote for a National Mask Mandate, Says Biden 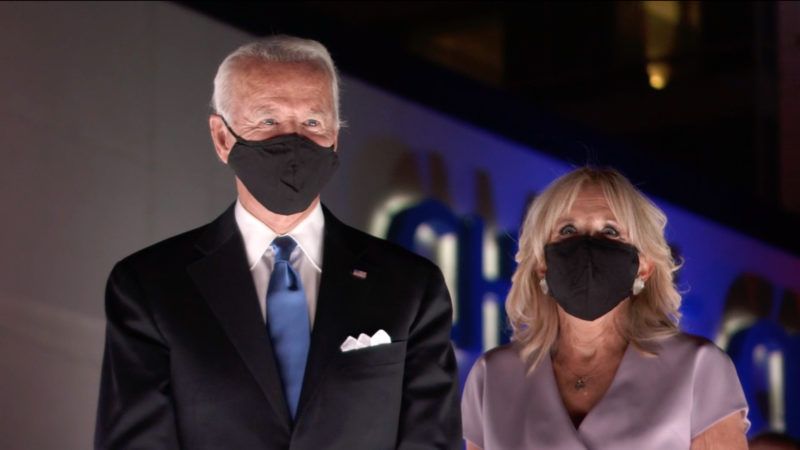 The Democratic convention wraps up. Former Vice President Joe Biden formally accepted the Democratic Party's 2020 presidential nomination last night with an address from the virtual Democratic National Convention. Biden's message, like the messages from other convention speakers talking about him, boiled down to I am a normal human being with normal levels of human empathy and a normal family, I won't be embarrassing on the national stage or in front of your children, and I won't put my own needs before the country's.

It was light on actual policy prescriptions, but strategically speaking it was probably what the moment called for, and Biden delivered it well. (Watch the whole thing here.) He did mention one highly specific policy prescription, though: Biden casually dropped a call for a national mask mandate.

Biden has been mentioning this since at least last week. But saying it during his acceptance speech solidifies it as a serious priority—and Biden was very clear that it would be.

"If I'm your president, on day one we'll have a national mask mandate," Biden told Americans last night, calling it part of "a patriotic duty to protect one another."

Generally speaking, mask wearing is good and mask mandates from the government are not. And if they do happen, it's much better that they occur at the local level, where leaders can respond to the varying needs and issues of their own communities.

Biden didn't say what exactly his national mask mandate would entail. (Withholding federal funds from states that don't enforce mandates seems the likely route.) But any national approach to when and where people across the whole country should wear face coverings is unlikely to be politically popular or as effective for public health.

The biggest problem with a federal mask mandate is that it requires enforcement.

That means either turning federal agents to the task of monitoring mask wearing or giving more funds to state and local police departments so they can do so. No matter how it's accomplished, there's no way that doesn't lead to more spending on law enforcement, more government surveillance, and more contact between cops and communities that are already overpoliced—all at a moment when millions of Americans are demanding just the opposite of that.

Baltimore's anti-competitive food truck rule has been upheld by the Maryland's highest court. The case, brought by food trucks Pizza di Joey and Madame BBQ against the city, challenged the city's "300-foot rule," which says food trucks and other mobile vendors aren't allowed to set up within 300 feet of a competing restaurant.

Pizza di Joey and Madame BBQ "seek to operate in Baltimore City, but contend that they are unable to do so due to a provision in Baltimore's street vending ordinance that restricts a food truck from parking within 300 feet of a brick-and-mortar restaurant that primarily sells the same type of food," says the opinion from the Court of Appeals of Maryland. The judges decided the 300-foot rule is OK and declared that Baltimore has a "legitimate interest in promoting the vibrancy of its commercial districts."

• "Biden's acceptance speech tonight did not even mention the words 'trade' or 'tariffs' a single time," notes Eric Boehm.

• More news on California's AB5, which prompted both Uber and Lyft to say they would stop doing business in California. "A state Court of Appeal on Thursday granted rideshare companies a temporary reprieve on an order to convert contract drivers to employees just hours after Lyft announced it would shut down in California at midnight," the Times of San Diego reports.

• A look back at Kamala Harris' dishonest campaign to destroy Backpage.

• Judges are now having to rule on whether individual wedding receptions can proceed.

• The Democratic Party platform "spends several pages on criminal justice reform, and the discussion isn't bad," writes Scott Schackford. But "qualified immunity doesn't need to be 'reined in.' It needs to be eliminated."