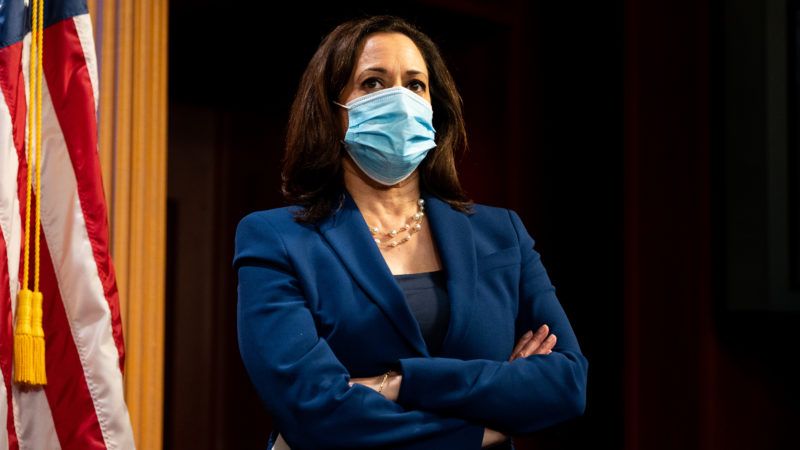 The Democratic 2020 veepstakes are over, and Sen. Kamala Harris (D–Calif.) is the winner. Joe Biden announced Tuesday afternoon that he had picked Harris to be his running mate as he seeks to become the next president of the United States.

The good news is that it keeps Harris—who has a long and authoritarian history on criminal justice issues—far from the Department of Justice. There was some speculation that should Biden win, he would name Harris as attorney general. As American's top cop, Harris would have the potential to do much more damage than as vice president.

The bad news is that it puts Harris next in line for the presidency should anything happen to Biden and sets her up nicely for a future presidential run. In Harris, we would get a leader with President Donald Trump's penchant for unchecked executive power and modern Democrats' tendency to consider no issue outside the reach of government.

The pick is somewhat surprising. Rumor had it that Biden hadn't forgiven Harris' backhanded busing stunt during the Democratic candidate debates last summer, and that influential operatives were urging him not to choose her because of it.

In addition, Harris—who served as a district attorney in San Francisco and attorney general of California before becoming a senator in 2016—has a troubling history when it comes to law-and-order issues and is despised for it by many young left-of-center voters; she consistently chose to protect law enforcement prerogatives and to stonewall reform in California, beyond the minimum demands of her role as the state's top cop. That's a particular liability as Americans streets are still erupting with protests over police violence and calls for criminal justice reform.

For more details on Harris's past and a glimpse of why she'll be dangerous in the White House in any capacity, here's some of Reason's previous coverage: