After a presidential pardon, Arizona's most notorious former sherrif is not a reformed man. 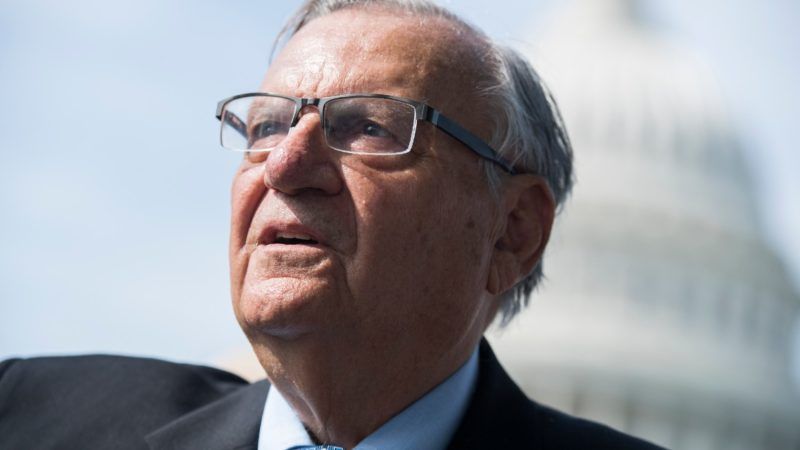 The tough-on-crime ex-sheriff was one of four Republican candidates hoping to replace Penzone, who himself replaced Arpaio in 2016, in the general election this November. Whoever wins that election will oversee one of the nation's largest sheriff's offices.

Arpaio's previous tenure as sheriff, which began in 1993, was defined by his frequent abuses of power. He became infamous for forcing inmates to wear pink underwear, work on chain gangs, and live in tent cities in the scorching Arizona heat. Under his watch, a SWAT team carried out a disastrous raid on a Phoenix home that ended with the residence engulfed in flames, a dog dying in the fire, and exactly one suspect taken into custody for outstanding traffic violations.

Using his official powers, Arpaio retaliated against the media for unfavorable coverage—a misdeed that he committed several times. He was also known to rely on racial profiling to enforce immigration law.

Arpaio was voted out of office in 2016. A federal judge found him guilty of criminal contempt of court a year later over his refusals to follow a court order commanding him to improve jail conditions and stop racially profiling.

A vocal supporter of President Donald Trump, Arpaio made history in 2017 by receiving Trump's first pardon.

In 2018, he ran an unsuccessful bid for the U.S. Senate. Apparently unable to resist the allure of public office, he announced his intention to re-run for sheriff in 2019.

Needless to say, Joe Arpaio is not a reformed man, but at least he won't get the chance to reclaim his title as "America's Toughest Sheriff" in 2020.

Meeting supporters everyday in the Arizona heat. I will never surrender! We must make Maricopa County Safe Again! pic.twitter.com/WQ9ggdaPYN