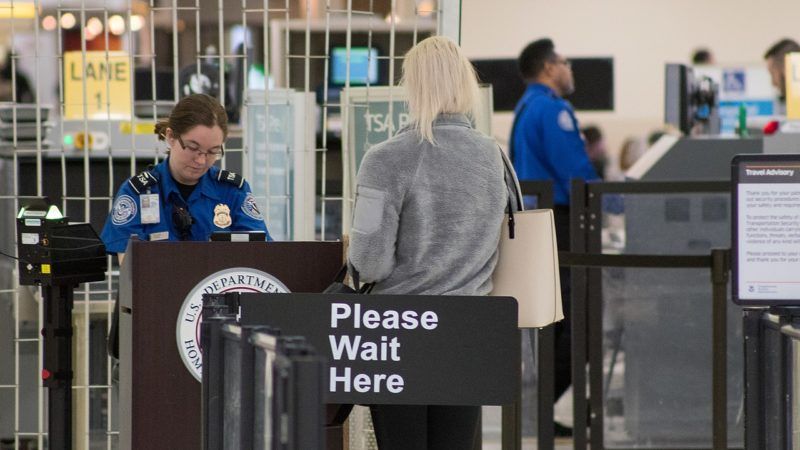 Customs and Border Protection (CBP) and other Department of Homeland Security agents seized more than $2 billion in cash from travelers in U.S. airports between 2000 and 2016, according to a new report by the Institute for Justice, a libertarian public interest law firm.

The institute's report is the first to comprehensively analyze the use of civil asset forfeiture by federal law enforcement in airports, where multiple news investigations have revealed horror stories of passengers having their money taken even though they weren't ever charged with a crime.

Take a case that Reason covered: Rustem Kazazi, a U.S. citizen who tried in 2018 to get on a plane to return to his native Albania from Cleveland Hopkins International Airport. Kazazi had roughly $58,000 in cash in his luggage, money he said he was taking to repair a house he owned and possibly to buy another. Kazazi was strip-searched by CBP agents, who also seized his life savings. The agency claimed the cash was "involved in a smuggling/drug trafficking/money laundering operation," despite there being no proof of that.

CBP failed to file a claim against Kazazi's money within the 90-day deadline, and then failed to return his money after the deadline passed. Last year, the U.S. government agreed to return nearly all of the cash, although Kazazi says it seized $770 more than it admitted.

Then there's the case of Anthonia Nwaorie, a Houston woman who had $41,000 in cash seized by CBP at an airport in 2018. The money was earmarked for a children's hospital in Nigeria. Kazazi and and Nwaorie's cases are just two of 30,000 cash seizures at airports across the country, according to the report.

"The most common reason for airport currency seizures is a failure to report traveling internationally with $10,000 or more in cash or other currency, as required by federal law," Institute for Justice senior research analyst Jennifer McDonald said in a press release. "Such paperwork violations account for half of all currency seizures and over a quarter of the total value seized—more than half a billion dollars—most without a demonstrated connection to serious criminal activity."

Reporting violations accounted for half of all airport currency seizures and 28 percent of the total value seized. The report also found that there were no arrests made in more than two-thirds of all the cases. Airport seizures also trended upward during the years studied.

Under civil asset forfeiture laws, law enforcement can seize property suspected of being connected to criminal activity, even if the owner is never charged with a crime. That includes cash, cars, and even houses.

CBP isn't the only agency seizing cash at airports. Earlier this year, the Drug Enforcement Administration (DEA) returned more than $82,000 that it seized from an elderly Pittsburgh man and his daughter after a federal class-action lawsuit was filed on their behalf by the Institute for Justice.

In 2016, a USA Today investigation found the DEA seized more than $209 million from at least 5,200 travelers in 15 major airports over the previous decade.

A 2017 report by the Justice Department Office of Inspector General found that the DEA seized more than $4 billion in cash from people suspected of drug activity over the previous decade, but $3.2 billion of those seizures were never connected to any criminal charges. The majority of seizures occurred in airports, train stations, and bus terminals

The Institute for Justice sued CBP in 2016 to obtain the records after the agency rejected the institute's Freedom of Information Act request for its Seized Asset and Case Tracking System database. CBP claimed first that the request was "over-broad" and then that the entire database was categorically exempt from public records requests because it contains law enforcement techniques and procedures. It took four years to obtain most of the data.

"The most common reason for currency seizures is a failure to comply with reporting requirements, which is a violation of federal law," a CBP spokesperson told The Washington Post. "However, currency seized by CBP at ports of entry has also been connected with bulk cash smuggling, counterfeiting, narcotics trafficking, and other criminal offenses. An individual may petition for the return of seized currency, but the petitioner must prove that the source and intended use of the currency was legitimate."