The Feds Are Still the Jackbooted Thugs We Were Warned About

Government agents brutalizing people are in the wrong, whether or not we sympathize with those on the receiving end. 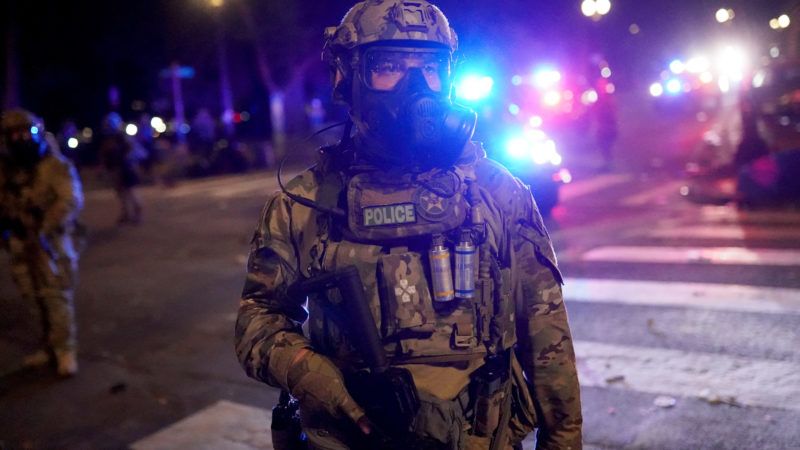 Federal law-enforcement agents brutally enforcing the government's will against a segment of the population on the outs with the current administration are "jack-booted government thugs," the National Rifle Association (NRA) charged in communications with its membership. Questioned by the press, the gun-rights group's Wayne LaPierre defended the heated words, saying "they are a pretty close description of what's happening in the real world."

But that was in 1995, and the federal agents in question were (very much still) out-of-control agents with the Bureau of Alcohol, Tobacco, Firearms and Explosives (ATF). Now booted-and-helmeted Department of Homeland Security (DHS) agents battle protesters in Portland over the protests of local officials, adding fuel to the fire of violent demonstrations there and in a growing number of other cities. Yet the NRA and other past critics of federal overreach are silent.

The NRA's tough 1995 language came at a time of increasing government restrictions on self-defense rights, including the 1994 "assault weapons" ban. Gun opponents pushed hard at the state and federal level to limit the types of firearms that Americans could own.

Enforcement of restrictive laws brought complaints about the government's methods. As early as 1982, even before federal misconduct at Ruby Ridge and Waco, a report by the Senate Judiciary Subcommittee on the Constitution concluded that "enforcement tactics made possible by current federal firearms laws are constitutionally, legally, and practically reprehensible."

That was the climate in which the NRA wrote in a fund-raising letter that "not too long ago, it was unthinkable for federal agents wearing Nazi bucket helmets and black storm trooper uniforms to attack law-abiding citizens."

Federal agents still target Americans, but now it's Homeland Security instead of ATF, and they're after protesters supporting Black Lives Matter and police reform instead of gun owners and antigovernment activists. And that makes all the difference, unfortunately.

"Where is the NRA?" critics ask. It's a valid question—one I posed to the organization. I received no reply.

More responsive was a representative of the Arizona Citizens Defense League (AZCDL), a grassroots gun-rights organization in the Copper State (full disclosure: I'm a member).

Fair enough so far as it goes—the federal government does have the responsibility to protect its property. But while much of the increasingly violent street theater in Portland is now focused around federal buildings, that wasn't the case when the feds arrived.

"Weeks of raucous demonstrations had nearly wound down in Portland at the beginning of July. Then President Donald Trump sent in federal forces," notes The Oregonian. "The protests against police violence and systemic racism quickly grew bigger and louder."

Since then, federal agents have often acted "with no city police in view and at least a block away from the federal courthouse that President Donald Trump and Acting Homeland Security Secretary Chad F. Wolf said they sent 114 federal officers to protect," The Oregonian adds.

Reason's Nancy Rommelman—who got tear-gassed so you don't have to—has documented the action on the ground in Portland. While she points out that the "vast majority of the protesters are peaceful," she makes clear that a subset of them are not.

Now, violent protests—riots—are spreading beyond Portland to other cities. The federal government's minions have successfully provoked a nasty reaction in Seattle, Austin, and elsewhere.

That was true in 1995, too. The NRA got its biggest pushback on criticism of federal agents after the Oklahoma City bombing, which was planned and carried out by extremists outraged over lethal federal abuses at Ruby Ridge and during the Waco siege. Then, as now, brutal federal tactics provoked a violent reaction with which defenders of the federal government tried to associate critics of official misconduct.

That's a shame; if the critics had been taken seriously, we might have avoided more violence and loss of life. That is, correctly calling out "jackbooted thugs" no matter who their targets are could be a good way of trying to head-off a cycle of reactive violence, if the warnings are heeded.

But we live in a time when too many people are concerned about the treatment of their tribe rather than equal protection and decent treatment for everybody. An unfortunate number of gun rights supporters and people on the right who, quite rightly, raged against abusive ATF agents in the past are quiet about or even supportive of federal agents busting the heads of protesters. Maybe they see that as payback for the folks on the left who dismissed criticism of federal agents in the past but are now suffering their own jackbooted-thug moment.

But you can't preserve a free society if support for limited government and civil liberties are situational, depending on who is on the receiving end. If you think it's fine to set enforcers to rousting people if you dislike their causes, you're just weaponizing the law and hoping that your side will, somehow, stay in power indefinitely. That's a no-win tactic.

The NRA and its allies were right 25 years ago when they called out federal "jackbooted thugs." But they need to learn to recognize the same thuggery when it's directed against people they don't like.

By the same token, the folks suffering from the current deployment of jackbooted thuggery should concede that they were wrong in the past when they defended such conduct on behalf of laws that they favored.

And all of us need to recognize that brutal government responses seem very effective at provoking more of the violence they're supposedly intended to subdue. There's a lesson to be learned when, again and again, enforcers sent in to suppress opposition produce more work for themselves and their colleagues.

In the past, now, and in the years to come, jackbooted thugs are in the wrong, whether or not we sympathize with those on the receiving end.