The Majority of Americans Oppose Qualified Immunity. Where Is Congress? 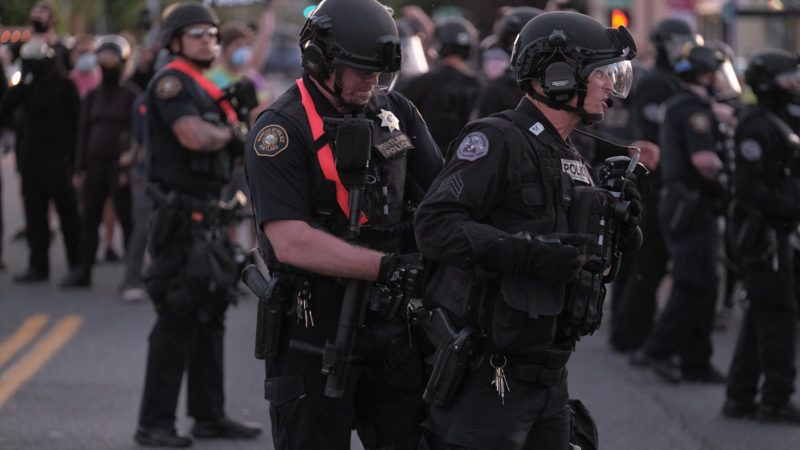 A majority of Americans now support police reform measures like chokehold bans, demilitarization of domestic law enforcement, and the prioritization of investigating violent crimes instead of misdemeanor offenses.*

But, perhaps more significantly, a Pew poll recently found two-thirds of Americans oppose qualified immunity, the legal doctrine that makes it difficult to sue police officers when they violate your rights. Until recently, discussion of qualified immunity was confined largely to legal circles and to magazines like Reason. Now, it appears the doctrine—and opposition to it—have simultaneously gone mainstream.

Qualified immunity shields public officials from being held liable in federal civil suits if their misconduct did not exist near-identically in a court precedent prior to the alleged incident. Created by Harlow v. Fitzgerald (1982), the doctrine has stripped Americans of their right to sue civil servants even in the most egregious of instances.

In theory, the doctrine provides public officials with fair warning of what is and is not acceptable conduct and thereby allows them to do their jobs without fear of being sued. How does the doctrine actually work? Let's consider the case of two cops from Fresno, California, who allegedly stole $225,000 while executing a search warrant.

When deciding if the victims would be allowed to sue the officers, the judiciary condemned the stealing as indefensible but still protected the officers from any lawsuits. Although "the City Officers ought to have recognized that the alleged theft was morally wrong," wrote the U.S. Court of Appeals for the 9th Circuit, it decided that the officers "did not have clear notice that it violated the Fourth Amendment."

Put more plainly: You and I know stealing is wrong, and the cops definitely should've known stealing is wrong. But even if they did know that, they couldn't be held liable for violating the Fourth Amendment protections against government theft because there was no specific legal precedent declaring that it is unconstitutional for cops in a situation exactly like theirs to steal from the people they are sworn to protect and serve.

There are plenty of examples of qualified immunity protecting awful government behavior: The sheriff's deputy who shot a 10-year-old; the cop who shot a 15-year-old; the officers who assaulted and arrested a man for standing outside of his own house; the prison guards who locked a naked inmate in cells filled with raw sewage and "massive amounts" of human feces; the cops who sicced a police dog on a surrendering suspect; the officer who body-slammed a 130-pound woman after she disobeyed his command to "get back there."

But while Americans appear to see the very obvious and well-documented issues with qualified immunity, Congress—the branch of government best positioned to abolish the practice—won't touch the topic with a 10-foot pole.

The legislative stagnation isn't for lack of trying. Rep. Justin Amash (L–Mich.) introduced legislation to eliminate qualified immunity. With Rep. Ayanna Pressley (D–Mass.) as his co-sponsor, the bill eventually picked up Republican support. Sen. Mike Braun (R–Ind.) followed suit and crafted his own legislation, which would grant qualified immunity only to officers whose conduct is expressly permitted by federal regulation, federal statutes, state statutes, or case law—essentially the opposite of the current approach.

Should presumptive Democratic nominee Joe Biden win in November, it's not completely clear what he would do on the issue. "Vice President Biden thinks qualified immunity has gone too far and needs to be severely reined in," says Jamal Brown, National Press Secretary for the Biden campaign. "It should not protect officers who abuse their power." That statement echoes Biden's "Unity Task Force" recommendations, which were drawn up in coordination with Sen. Bernie Sanders (I–Vt.).

The former vice president has not offered concrete details on how his reforms will distinguish between officials who deserve protection from federal civil lawsuits, but his track record suggests he will go (almost) wherever center-leftists tell him to. In this case, everyone to the left of Trump overwhelmingly supports sunsetting the doctrine.

For now, though, it appears qualified immunity is poised to meet a rather typical fate, in that it will likely stay exactly as it is.

CORRECTION: The original version of this piece misstated the third poll's findings. A majority of Americans support prioritizing violent crimes over misdemeanor crimes, not victimless crimes.