The decision vividly illustrates how the doctrine shields police from accountability for using excessive force. 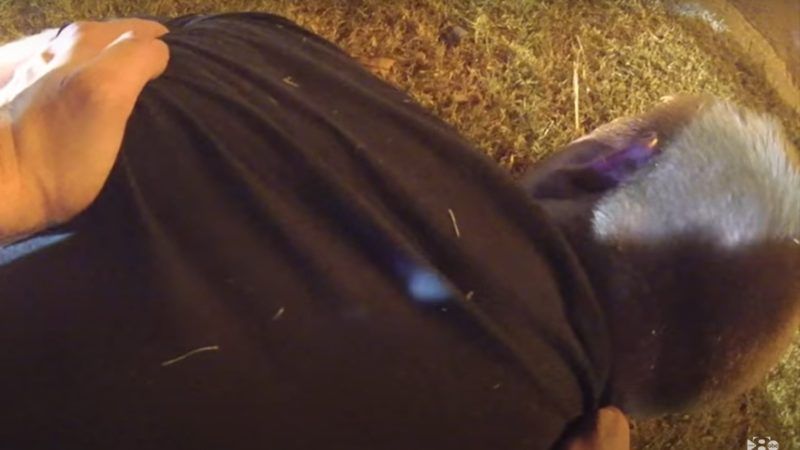 On a Monday night in August 2016, Tony Timpa, a 32-year-old Dallas resident, called 911 to report that he was "having a lot of anxiety" about a man he feared would harm him. Timpa mentioned that he had received several psychiatric diagnoses—schizophrenia, depression, bipolar disorder, and anxiety disorder—but had not taken his medication that day. After police arrived in response to that call and other reports of a man behaving erratically near 1728 West Mockingbird Lane, Timpa yelled, "You're gonna kill me!" He was right.

Timpa, who had already been handcuffed by a security guard, died while being pinned to the ground face down by several police officers for about 15 minutes, during which time he pleaded with them to stop and cried for help over and over again. The officers, while intermittently showing signs of compassion, joked about Timpa's predicament and the possibility that they had killed him.

This week, in a decision that vividly illustrates how difficult it is to hold cops accountable for misconduct under a federal statute that authorizes lawsuits against government officials who violate people's constitutional rights, a federal judge granted qualified immunity to those officers. Whether or not they violated Timpa's Fourth Amendment rights, U.S. District Judge David Godbey ruled, the law on that point was not "clearly established" on the night he died.

The circumstances of Timpa's death are broadly similar to what happened when George Floyd was suffocated by Minneapolis officers on May 25, a horrifying incident that provoked nationwide protests and calls for police reform. One of the proposed reforms is the abolition of qualified immunity, a court-invented doctrine that blocks federal civil rights claims when plaintiffs cannot identify sufficiently specific precedents. Godbey's decision shows how formidable that barrier is.

Timpa's family argued that the Dallas officers' use of force was clearly unconstitutional under Gutierrez v. City of San Antonio, a 1998 case involving a man who died while restrained face down in the back of a patrol car. In that case, the U.S. Court of Appeals for the 5th Circuit, which includes Texas, allowed an excessive force claim to proceed. In both cases, the lawsuit filed by Timpa's relatives notes, police knew the detainee was under the influence of cocaine. The 5th Circuit in Gutierrez held that the use of force can be excessive "when a drug-affected person in a state of excited delirium is hog-tied and placed face down in a prone position."

Godbey noted that Timpa, although restrained on his stomach while his hands and feet were shackled, was not hog-tied, which in his view was enough to make Gutierrez inapplicable. He cited three subsequent cases in which the 5th Circuit had blocked excessive force claims against officers who allegedly used deadly prone restraints against resisting detainees.

Godbey likewise was unimpressed by decisions in which five other federal appeals courts had ruled that prone restraints causing death or severe injury did or could qualify as excessive force. Those rulings, he said, did not amount to "a 'robust consensus' of persuasive authority," because the U.S. Court of Appeals for the 8th Circuit reached a different conclusion.

This year the 8th Circuit blocked an excessive force claim against St. Louis police officers who allegedly killed a man arrested for trespassing by pinning him face down on the floor of his jail cell. In that case—which complicates a federal lawsuit over George Floyd's death because the 8th Circuit includes Minnesota—the appeals court concluded that "the Officers' actions did not amount to constitutionally excessive force," because they "held [the arrestee] in the prone position only until he stopped actively fighting against his restraints and the Officers."

Was Tony Timpa "actively fighting" the officers who killed him? Citing the "custodial death report" filed after the incident, his family notes that he "never threatened" the officers, "never resisted being handcuffed," "never attempted to hit or fight with" them, "never used a weapon to threaten or assault" them, and "never attempted to flee." But in Godbey's view, those facts were not enough to establish that the officers used force against a "non-resisting" detainee, as Timpa's family argued. "Although Timpa was not struggling for the entire duration of Defendants' restraint of him," he writes, "the body cam video and audio shows that he continuously moved and yelled in contravention of the officers' directives, kicked at [two officers], and was struggling enough that [a paramedic's] first attempt to take his vitals was unsuccessful."

Recall that the cops ostensibly were there to help Timpa, who was obviously freaking out and according to his family was "suffering drug-induced psychosis." The officers clearly recognized that Timpa was intoxicated, since they repeatedly asked him what drug he was on, and he told them he had taken cocaine. Yet they proceeded to restrain him for 15 minutes in a position that made it difficult for him to breathe. Given the circumstances, Timpa's "resistance," which the officers repeatedly described as "squirming," was perfectly understandable. Godbey's framing suggests that someone who panics because he is being smothered to death thereby justifies the use of force that caused him to fear for his life.

An expert hired by Timpa's family concluded that he "died due to mechanical asphyxia." The Dallas County medical examiner concluded that Timpa suffered "sudden cardiac death due to the toxic effects of cocaine and physiological stress associated with physical restraint." She added that because of "his prone position and physical restraint by an officer, an element of mechanical or positional asphyxia cannot be ruled out."

Video from the body camera worn by Officer Dustin Dillard, who pinned Timpa to the ground by kneeling on his back, shows Timpa lying with his nose buried in the grass between the sidewalk and the street, unresponsive and apparently unconscious. The officers conclude that he has fallen asleep. "If I was squirming like that, I'd be sleeping too," says one. "Hey, time for school! Wake up!" says another. The two cops—Cpl. Raymond Dominguez and Officer Danny Vasquez—elaborate on the gag, laughing while portraying Timpa as a child who does not want to go to school and describing the breakfast of "scrambled eggs" and "tutti-frutti waffles" waiting for him.

After the cops lift Timpa onto a gurney and he remains unresponsive, Dillard asks a paramedic, "Is he knocked out? He ain't dead, is he? He didn't just die down there, did he?…Is he breathing?" As Timpa is wheeled to the ambulance, Dominguez rubs his chest and, getting no response, turns toward Dillard's body camera, his face screwed into a comical "yikes" expression. "I hope I didn't kill him," Dillard says. His colleagues laugh in response. "What's all this 'we' shit?" Vasquez says, although Dillard did not actually say we. "I love how all this became a 'we.'" Another officer jests, "We ain't friends."

After a paramedic examines Timpa in the ambulance and announces that "he's not breathing," Dillard responds, "He's not breathing? Oh, shit." Another paramedic says "he's dead," at which point Sgt. Kevin Mansell, who is on the phone with Timpa's mother, exclaims "He's what?!" and hangs up.

The officer's nonchalant, jocular demeanor, while striking in its callousness, makes it clear that they did not intend to kill Timpa. But Timpa's family argues that they recklessly caused his death by using force that was not warranted in the circumstances. Or I should say that they want to make that argument. Godbey's decision, unless it is overturned by the 5th Circuit, means they will not get a chance to pursue that claim.

"This is exactly why qualified immunity must be abolished or at least modified," says Geoff Henley, the attorney representing Timpa's family. "It allows officers to continue to use force that we all see and know to be excessive simply because there is no previous ruling prohibiting precisely the same kind of force. It's squeezing a football through the eye of a needle."

The family's chances of winning an appeal do not look good, even if the 5th Circuit decides that Dillard and the other officers used excessive force. Two years ago, the appeals court concluded that members of the Texas Medical Board had violated a doctor's Fourth Amendment rights by searching his office and records without a warrant. But the board members still got qualified immunity, because "the unlawfulness of the defendants' conduct was not clearly established at the time of the search."

Judge Don Willett, who felt compelled by precedent to concur in that decision, wrote a separate opinion in which he decried the unjust and irrational consequences of qualified immunity. "To some observers," he noted, "qualified immunity smacks of unqualified impunity, letting public officials duck consequences for bad behavior—no matter how palpably unreasonable—as long as they were the first to behave badly."

Willett added that the doctrine creates a "Catch-22" because courts frequently grant qualified immunity without even deciding whether the defendants' conduct was unconstitutional. "Plaintiffs must produce precedent even as fewer courts are producing precedent," he wrote. "Important constitutional questions go unanswered precisely because those questions are yet unanswered."

That is exactly what happened with the lawsuit filed by Timpa's family. Godbey implies that Timpa's resistance—which to many people who watch the body camera video looks like a man's desperate struggle to stay alive—could justify the force used against him. But Godbey never squarely addresses that issue. The decision therefore not only lets these defendants off the hook but allows other police officers in the 5th Circuit to do exactly the same thing again, now and forever. As Henley observes, "there will be more unnecessary deaths unless there is real legal change."