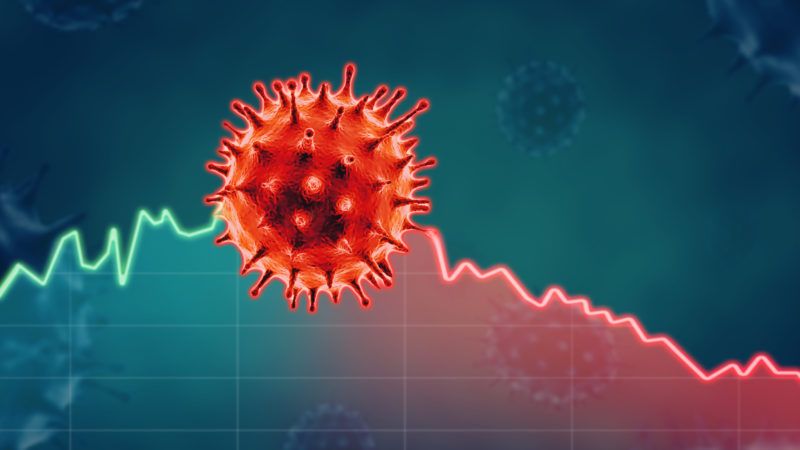 As COVID-19 cases surge in the United States, both daily deaths and the crude case fatality rate continue to decline. There are several plausible explanations for those seemingly contradictory trends, including expanded testing that identifies more mild cases, a younger mix of patients, and improved treatment.

Since there is a lag of about two weeks between laboratory confirmation and death, we can expect to see daily fatalities rise during the next few weeks. But they are still likely to be far below the levels recorded in April and early May. The crude case fatality rate in the United States, which exceeded 7 percent in early March, has fallen to 4.5 percent.

Are these positive trends an illusion created by looking at nationwide averages rather than what is going on in the states where cases are rising dramatically? To some extent, yes. Daily deaths are rising in those states, but not nearly as much as you would expect if COVID-19 were killing patients as frequently as it did earlier in the epidemic.

In Texas, newly confirmed cases rose 13-fold, from 623 to 8,258, between May 25 and July 4 before falling to 3,449 yesterday. The number had risen six-fold as of two weeks ago, and by now that increase should be having an impact on daily deaths. Yet the rolling seven-day average of daily deaths has risen only modestly since Memorial Day, from 26 to 32. Meanwhile, the crude case fatality rate for Texas, which peaked at 3.4 percent on April 30, has continued to fall, reaching 0.5 percent yesterday.

"So far," The New York Times notes, "the death toll has not climbed much in Texas and other parts of the South and West seeing a surge." Even taking into account the increase in cases during the last two weeks, Youyang Gu's epidemiological model projects that daily deaths in Texas will rise to a peak of 64 in mid-to-late August before declining to 52 by the end of September. That's a substantial increase but not at all commensurate with the spike in cases.

Expanded testing helps explain declining case fatality rates in Texas and across the country. Since the denominator now includes more people with mild or no symptoms, the apparent death rate was bound to fall. Another likely reason why COVID-19 looks less deadly now than it did earlier in the epidemic is that the average age of new patients has fallen dramatically in the states where cases are surging. The median age of people testing positive for the virus in Florida, for example, plummeted from 65 in early March to 35 in mid-June.

This wave seems to be driven largely by young people getting together in bars and at house parties, and perhaps also by low-risk individuals returning to work. It makes sense that people whose own risk of dying from COVID-19 is negligible would be less likely to wear masks and follow physical distancing guidelines. Americans who are most vulnerable to the disease, meanwhile, are apt to be especially cautious, and states presumably have gotten better at protecting them than they were two months ago, when nursing home residents accounted for more than two-fifths of COVID-19 deaths.

Improvements in treatment probably also help explain why COVID-19 patients are faring better now. Medical personnel have "become more knowledgeable about promising treatments and palliative care options to combat the coronavirus and its effects," the Times notes. "For instance, prone positioning, in which patients are flipped onto their stomachs, can ease respiratory distress by opening up the lungs. Critically ill individuals are also now known to be vulnerable to excessive blood clotting, and may benefit from blood thinners. And the steroid dexamethasone appears to reduce deaths among patients with severe Covid-19, although the data demonstrating this emerged only recently."

One of the arguments for lockdowns was that delaying cases would reduce the ultimate death toll by buying time for improvements like these. That may indeed be what happened, although the extent to which lockdowns actually reduced virus transmission is a matter of much debate. Cellphone and foot traffic data show that Americans were practicing social distancing before they were legally required to do so and started moving around more before lockdowns were lifted.

Gu's estimates likewise show that the COVID-19 reproductive number—the number of people infected by the average carrier—was falling before states started imposing lockdowns, although that policy may have reinforced the preexisting trend in some places. As of yesterday, according to his model, the reproductive number in California was 1.1, compared to 1.07 in Texas and Florida.

On the face of it, that comparison does not suggest that California has been especially successful in reducing transmission, even though it led the nation in imposing sweeping legal restrictions on movement and economic activity, which it has been lifting only gradually. California, like Texas and Florida, has seen a spike in newly confirmed cases since mid-June. In all three states, Gu projects, daily deaths will rise gradually until mid-August or so, then fall gradually through September.

Whatever role imposing and lifting lockdowns have played in these trends, the outlook at this point is much less grim than many people predicted. Back in March, the Trump administration was projecting a many as 2.2 million deaths in the United States, which would have made COVID-19 as deadly, adjusting for population growth, as the "Spanish flu" epidemic of 1918. Gu, who has a good track record of predicting COVID-19 deaths, is now projecting about 186,000 by October 1.

As recently as May 4, The New York Times was warning that the United States could see 3,000 COVID-19 deaths a day by June 1, thanks to "reopening the economy." That is 12 times the current level and four times the number Gu is projecting for late August.