He does not appear to have told the Federal Elections Commission yet. 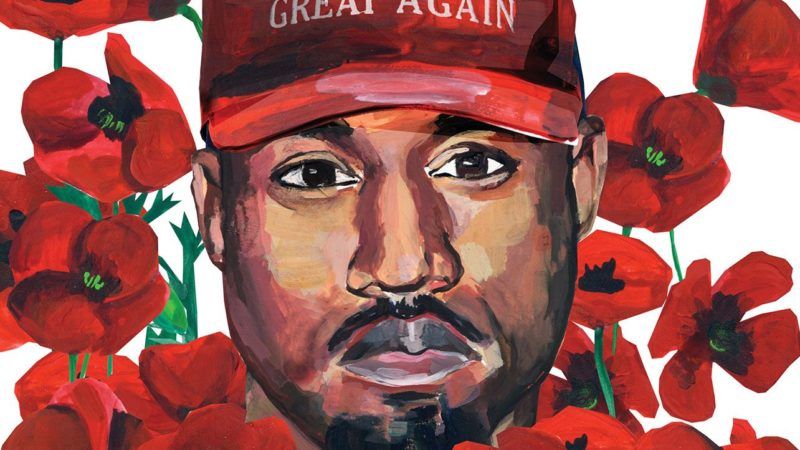 Kanye West, the hip hop and fashion mogul whose public moves in the past few years have included a controversial flirtation with MAGA-ism and a turn toward pure Christian messaging in his music, chose the nation's birthday to announce this via tweet:

We must now realize the promise of America by trusting God, unifying our vision and building our future. I am running for president of the United States  #2020VISION

The Federal Election Commission's website shows no sign yet that he's done any of the legal filings to really run for the office. But he has already cleared what may be the most important hurdle toward such endeavors: the public support of his wife, Kim Kardashian West, who retweeted his announcement with apparent approval, adding merely a flag icon to her husband's declaration. Tech mogul Elon Musk is also already backing Kanye's candidacy.

As I pointed out in a 2019 Reason story, despite his oft-repeated fandom for President Donald Trump, the only specific policy issues West has been public about supporting are criminal justice reform, getting more jobs into American cities, and gun control. He and Kim Kardashian West have been effective lobbyists for prison reform, both generically and in the specific matter of getting the nonviolent drug offender Alice Johnson out of prison.

After being discouraged by public attacks over his Trump support in 2019, West tweeted, as my Reason article reported:

some of the things he stands for politically, including "holding people who misuse their power accountable." He continued: "I believe in love and compassion for people seeking asylum and parents who are fighting to protect their children from violence and war….I support creating jobs and opportunities for people who need them the most, I support prison reform, I support common-sense gun laws that will make our world safer."

He also tweeted that moving forward he'd be "distancing myself from politics and completely focusing on being creative !!!" but it's an artist's prerogative to change his mind.

West has been talking presidential ambitions since 2015. One imagines that he intends to run as an independent, if he ends up going through with it at all.

It's not too late for him to pull it off, if he's willing to spend some of his millions. As per a useful chart from the indefatigable Richard Winger in the April 2020 issue of his irreplaceable newsletter Ballot Access News, only three states are already past their deadlines for getting on the ballot as an independent presidential candidate: Indiana, New Mexico, and Texas.**

The petitioning requirements for an independent run are in most cases easier than for a full third party. Of the states whose deadlines are not already past or within two weeks, only seven require 10,000 or more signatures for an independent candidate's ballot access: Arizona, California, Maryland, Massachusetts, Missouri, New York, and Oregon.**

Petitioning is a problem solvable with money and organization, though obviously way trickier in a pandemic year, when finding strangers to ask for signatures in public is a lot harder than usual. But it isn't impossible, and the Libertarian Party aleady won one lawsuit connected with petition requirements that seem objectively unreasonable given COVID-19.

West is a mercurial character, and you shouldn't bet a lot that a real campaign will follow this announcement. But it wouldn't be impossible.

**Correction: The original posting listed Illinois and New York as states for which the petition deadline had already passed, as per the April 2020 Ballot Access News chart. Richard Winger, the editor, informs via e-mail that the legal circumstances have changed since then and those states deadlines are pushed back.