Is the COVID-19 Pandemic Self-Flattening, or Will It Grind Relentlessly on? 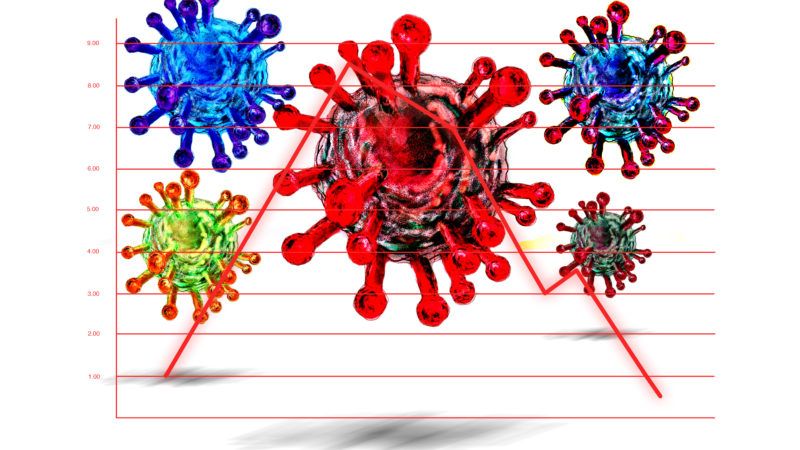 Seeking auguries of the future, people in the past probed the livers of sheep, observed the flights of birds, gazed into crystal balls, read tea leaves, cast I Ching coins, and traced patterns on burnt bones. Modern prognosticators resort to statistical models.

For example, the initial public health and policy responses to the COVID-19 pandemic were driven by models that predicted imminent catastrophic rates of infection and death at the beginning stages of the novel coronavirus outbreak. Notoriously, the Imperial College (I.C.) infectious disease model projected that as many 2.2 million Americans could eventually die of COVID-19 if no action to stymie it was taken. Later, the I.C. model projections for infections and deaths were drastically reduced once it became evident that the public was adopting measures—lockdowns, social distancing, frequent hand washing—that would greatly slow the spread of the disease.

The I.C. model and its principal investigator, epidemiologist Neil Ferguson, received well-deserved scathing criticism when he initially refused to publish the source code for the model for other researchers to evaluate. However, outside researchers recently reported that they have been able to independently rerun the I.C. simulation and have reproduced its results. That just means that if other researchers use the same assumptions that the I.C. team did, they will get the same results.

Last week, a global team of researchers issued a compelling manifesto in Nature outlining five ways to ensure that models serve society. Modelers, they argue, must take care to frankly assess the uncertainties and sensitivity of their models; avoid obfuscatory complexity; make clear the normative values chosen by the models' developers; avoid spurious precision, and acknowledge their ignorance. "Mathematical models are a great way to explore questions. They are also a dangerous way to assert answers," write the authors. "Asking models for certainty or consensus is more a sign of the difficulties in making controversial decisions than it is a solution, and can invite ritualistic use of quantification."

Since the beginning of the pandemic six months ago, researchers have been trying to figure out how deadly the coronavirus is; that is, what percentage of infected people die of the disease? This infection fatality rate (IFR) is calculated by dividing the number of deaths into the total number of people who come down with the disease. However, it has become increasingly clear that most people who become infected are never officially diagnosed because their illnesses are so mild that they never seek medical care and also because many infected people exhibit no symptoms.

Last week, a team of modelers from the Massachusetts Institute of Technology's Sloan School of Management released a preprint of their study that calculates that total global cases and deaths through June 18, 2020, are estimated to be 11.8 and 1.48 times greater than diagnosed cases and officially counted deaths, that is, respectively, at 88.5 million cases and 600,000 deaths as of that date. On the basis of those estimates, they reckon that the global average IFR is just under 0.7 percent.

Interestingly, based on their global estimates of unreported cases and unrecorded deaths, very rough calculations yield IFRs in most countries that appear to be somewhat lower than the ones they report in their study. One possibility for this discrepancy may be how the researchers incorporate excess mortality data in their model so that it increases their calculated IFRs.

In contrast to the MIT estimates, random blood testing surveys to detect the percentage of the population that has produced antibodies in response to COVID-19 infections have been conducted by several countries. (It is worth noting that new research suggests that testing for T-cell immune response will provide a better idea of the proportion of the population that has been infected by the COVID-19 virus.) The results of serology surveys recently conducted by several countries are now available.

One such survey, for example, found that about 5 percent of Spain's population was infected by the beginning of May. This implies that the infection rate is about 10 times higher than diagnosed cases and the infection fatality rate (IFR) is around 1 percent. Another study based partially on serology testing reported that about 4.4 percent of French people were infected by early May, yielding an IFR around 1 percent as well. In the U.S. the CDC suggested in June that the rate of COVID-19 infection may be 10 times higher than the diagnosed cases. If so, that implies a U.S. IFR of just over 0.5 percent.

Based on their model, the MIT researchers project that absent breakthroughs in treatment or vaccination by Spring 2021, the pandemic will grind on and COVID-19 cases will globally rise to around 249 million and total deaths will number about 1.75 million in the 84 countries they analyze.

In stark contrast to the MIT researchers' grave projections, Stanford University biologist and Nobelist in chemistry Michael Levitt and his team argue in their preprint study that the pandemic is essentially self-flattening and is already subsiding in much of the world. The Stanford team tracks data on cases and deaths from COVID-19 outbreaks at 3,546 locations around the world. They find that after an initial steep rise in each outbreak that the rates of diagnosed infections and deaths generally begin to decline at a steady, almost linear, pace.

As Medical News explains, the Stanford team created graphs for each outbreak using data that takes into account four trends. The first three are the total case number, the total death number, and their ratio, that is, the death rate. The fourth measure is the ratio of the total cases (or deaths) for today divided by the same ratio of yesterday. This is known as the "fractional change function." This analysis revealed that, instead of growing exponentially, the epidemics in many regions are actually slowing down exponentially with time. (Interestingly, the daily rate of U.S. COVID-19 deaths has been slowing down, but the daily number of diagnosed cases has started growing once again.) So how does Levitt account for the epidemic's self-flattening behavior?

Levitt and his colleagues argue, "The existence of invisible cases of individuals who are mildly symptomatic and, therefore, not counted as confirmed cases may explain the non-exponential behavior of COVID- 19: the known cases cannot easily find people to infect as the hidden invisible cases have already infected them." They also acknowledge that changes in behavior such as the wide adoption of social distancing and mask-wearing would also contribute to flattening the epidemic.

"Imagine I had a confirmed case of COVID. Unbeknownst to me, a declared case, I've also infected my friends, my kids, people near me. And this means on the first day, I can infect people, but then the next day, I can't find people so easily to infect," explained Levitt in a May 4 interview with The Stanford Daily. "In some ways, what's happening is that invisible cases are having a hard time finding people to infect, because the invisible cases have already infected them. Since then, there's been a lot of extra findings about maybe we have some natural immunity to the virus as well."

Basically, Levitt is arguing that the various regions his team is tracking are reaching COVID-19 herd immunity much faster and at lower levels than most epidemiologists think likely. While most epidemiologists believe that the COVID-19 herd immunity threshold is somewhere around 60 to 70 percent, "I personally think it's less than 30 percent," said Levitt in the interview. Recent very preliminary research in fact suggests that several regions have already achieved herd immunity to COVID-19.

According to Worldometers data, global daily COVID-19 deaths peaked in April and have since been on a plateau of around 4,000 per day for the last couple of months. If that daily death rate is sustained through March of next year that would just about match the global projections made by the MIT team.

Will the COVID-19 pandemic grind grimly on racking up ever more deaths as the MIT researchers predict or will it moderate and recede mildly into the background of daily life as the Stanford team forecasts? We should know which of the statistical numerologists is the more accurate by the end of the summer.