Just days before the new North American trade deal is set to take effect, the Trump administration reminds everyone that it prefers protectionism to free trade. 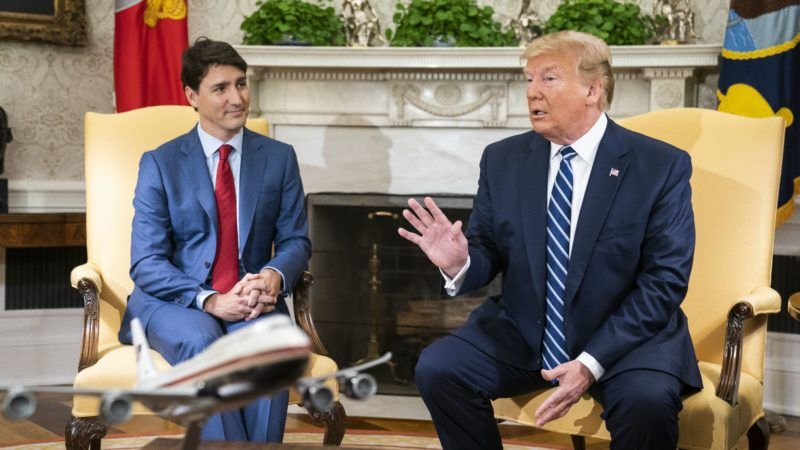 Just days before a new trade deal among the United States, Canada, and Mexico is set to take effect, the administration is reportedly considering reimposing tariffs on Canadian aluminum that it had dropped in order to negotiate the deal.

Whether or not the 10 percent tariffs become reality again, the incident seems to demonstrate—once more—that foreign nations have little to gain by negotiating trade deals with America while Donald Trump remains in office. As long as America's trade policy is being directed by tempestuous protectionists, it will be difficult for any foreign leader to trust that the U.S. is negotiating in good faith.

Restarting an unnecessary and counterproductive trade skirmish with a close ally and key trading partner would also demonstrate that the president has learned nothing from more than two years of failed tariff policies.

"Bringing back these tariffs would be like a bad horror movie," Neil Herrington, a senior vice president at the U.S. Chamber of Commerce, told The New York Times. If they are enacted, Canada will likely retaliate with tariffs on American goods, likely souring any goodwill that might have been generated by the upcoming official launch of the United States–Canada–Mexico Agreement (USMCA).

The Trump administration imposed 10 percent tariffs on nearly all aluminum imports (and 25 percent tariffs on most steel imports) in March 2018 for shallow "national security" reasons. A year later, the White House lifted those tariffs on imports from Canada and Mexico after congressional leaders and foreign officials said this would be a necessary first step to reaching the tripartite trade deal that Trump sought to replace the North American Free Trade Agreement (NAFTA).

Under the terms of the new deal, the United States retains the right to impose tariffs on Canadian aluminum if there is a surge in imports—and that is the justification White House officials appear to be using for this latest tariff threat. As Politico reports, U.S. Trade Representative Robert Lighthizer told Congress last week that the administration was "looking at" a recent increase in aluminum imports from Canada as "something of genuine concern."

But genuine concern to whom? The Times reports that the push for new tariffs is coming from exactly two domestic companies: Century Aluminum and Magnitude 7 Metals.

That supposed surge in imports is overblown too. The Aluminum Association, an industry group, said in a statement that imports from Canada are "largely consistent with historical trends in line with historic norms."

Just like in 2018, tariffs on aluminum imports stand to harm far more American businesses and consumers than they would help—97 percent of American aluminum jobs are in downstream industries where higher costs on imported metal will cause unnecessary economic pain. As always, Americans will be hit with the cost of the tariffs, which are taxes paid by importers, not by foreign manufacturers.

"The last thing that U.S. manufacturers need is for the government to tax an important input like aluminum while these companies are dealing with unprecedented challenges resulting from the COVID-19 pandemic," the Coalition of American Metal Manufacturers and Users said in a statement. The group noted that U.S. manufacturers have been paying billions of dollars in tariff-related costs for two years, and that they could have used that money to hire workers or make capital investments.

More tariffs on Canadian aluminum make little sense as economic policy. But what about as a political tactic? There, too, it's unclear what Trump stands to gain by undermining the launch of the USMCA, one of his administration's signature accomplishments—or by raising taxes on American businesses during an election year.

And if the Trump administration is going to object every time a new trade deal causes more trade to happen, what incentive do other countries have to negotiate for better terms? The whole episode seems to confirm that Trump values the ability to raise barriers to trade more than he wants to lower them, and it exposes the fundamental flaw in his view of trade as a zero-sum game. When more aluminum is bought and sold across the U.S.-Canada border, both countries become more prosperous.

"Tariffs on Canadian aluminum on the eve of the USMCA commencement make no economic or diplomatic sense," says Dan Ikenson, director of trade studies for the libertarian Cato Institute, "but that makes the move perfectly Trumpian."