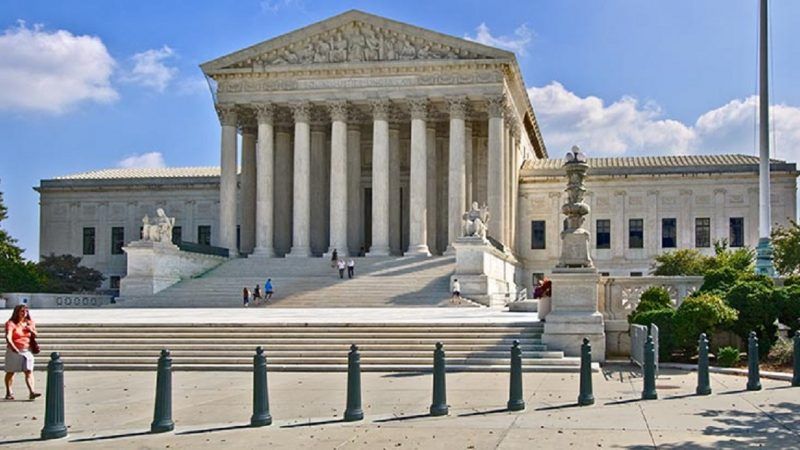 The killing of George Floyd by a Minneapolis police officer on Monday has reignited calls for national reforms to policing, including ending qualified immunity, a legal doctrine that civil liberties groups say has become a shield for grotesque police misconduct.

While some of the actions that criminal justice advocates are calling for—such as national use-of-force standards and limiting the power of police unions—would require large amounts of political capital, the issue of qualified immunity happens to be before the Supreme Court right now.

The Supreme Court could announce as early as Monday that it's taking up several cases involving the doctrine. The Court considered 13 different petitions for cases involving qualified immunity at a conference hearing yesterday.

Qualified immunity, created by the Supreme Court in the 1970s, shields police and other government officials from liability in civil rights lawsuits when the illegality of their actions was not "clearly established" at the time of the offense.

"We need legislation that specifically goes after qualified immunity and the additional protections offered to law enforcement officers…We want to make sure that the laws from a federal level, number one, that these cases are no longer handled solely locally, but that the federal government will be asked to come in in each of these cases or these states will be denied federal funds."

The petitions before the Supreme Court have attracted amicus briefs from a notable range of groups, including the Reason Foundation (the nonprofit that publishes this website), the Cato Institute, and the American Civil Liberties Union (ACLU).

While it may seem like George Floyd's right to not be choked to death by a police officer would be rather obvious, the fuzzy phrase "clearly established" has evolved over time to become a pedantic and unforgiving standard. Plaintiffs are often required to go fishing for cases that match their exact circumstances, lest their lawsuit get tossed. Last year, a 9th Circuit Court of Appeals panel granted qualified immunity to an officer who, without warning, shot a 15-year-old holding an airsoft gun.

"Under the circumstances, a rational finder of fact could find that [Officer Michael] Gutierrez's use of deadly force shocked the conscience and was unconstitutional under the Fourteenth Amendment," the panel wrote. But "because no analogous case existed at the time of the shooting, the district court erred by denying Gutierrez qualified immunity for this claim."

As U.S. Circuit Judge Don Willett wrote in a 2018 decision, "to some observers, qualified immunity smacks of unqualified impunity, letting public officials duck consequences for bad behavior—no matter how palpably unreasonable—as long as they were the first to behave badly."

And in many cases, courts don't even rule on whether the alleged conduct would have been unconstitutional, taking a pass on one of their core duties. Last September, the 9th Circuit ruled that Fresno, California, police officers accused of stealing more than $225,000 while executing a search warrant were protected by qualified immunity, but it also declined to say whether the alleged theft violated the Constitution.

Between the farcical standard that many courts enforce on plaintiffs to find identical cases, and those same courts' refusal to establish new case law, the doctrine of qualified immunity is a formidable barrier to civil rights lawsuits against police. In a Reuters analysis of 252 federal appellate opinions from 2015 to 2019 where law enforcement defendants claimed qualified immunity, courts ruled in the police's favor in 57 percent of the cases.

"Such a one-sided approach to qualified immunity transforms the doctrine into an absolute shield for law enforcement officers, gutting the deterrent effect of the Fourth Amendment," Supreme Court Justice Sonia Sotomayor wrote in a 2018 dissent. "It tells officers that they can shoot first and think later, and it tells the public that palpably unreasonable conduct will go unpunished."

But the Supreme Court is, to understate it, reluctant to second-guess police. As the Cato Institute's Clark Neilly noted this week, the Court "recently let stand an Eighth Circuit decision dismissing, on qualified immunity grounds, a Section 1983 case against a Nebraska officer who picked up a five-​foot-tall, unarmed woman clad only in a bathing suit and drove her head-​first into the ground, knocking her unconscious and breaking her collarbone—not because it was lawful for him to do so, but rather because there happened to be no case on point with precisely those facts."

Ending qualified immunity wouldn't end police brutality, but it would put departments and individual officers on notice that they can no longer brazenly harm and kill people without consequences.