Plus: "Obscene" cartoonist gets probation, U.S. teen births plummet, a reopening win in Ohio, and more... 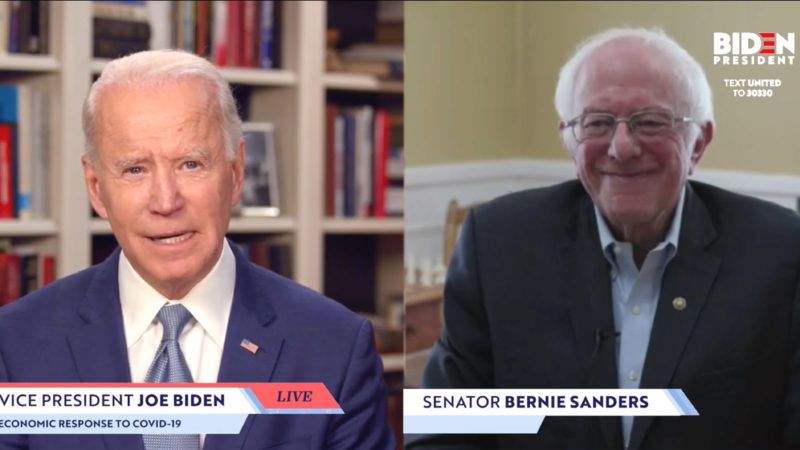 After delegate drama in 2016, Democrats aren't taking any chances this time. Sen. Bernie Sanders (I–Vt.) has asked at least some of his 2020 delegates to sign a pledge saying they won't denounce Democratic party leaders or other candidates, won't be argumentative with anyone on social media, and won't speak to the press without explicit approval.

"Your role as delegate comes with a series of responsibilities and requirements," states the Sanders delegate agreement, published by The Washington Post. It includes a social media policy, a code of conduct, and a non-disclosure agreement for delegates.

Failure to follow these policies could lead to "disciplinary action, including but not limited to your removal from the delegation," it states.

"Social media postings have the potential to generate media coverage," notes the Bernie 2020 Delegate Social Media Policy. "If a member of the media contacts you about a posting of any kind: ​do not respond," and instead forward it to Sanders press staff.

Other social media rules include:

Assume everything you post is 'on the record' and will be attributed to the Candidate and the Campaign.

[…] Do your best to avoid online arguments or confrontations. If engaging in an adversarial conversation, be respectful when addressing opposing viewpoints or commenting on the opposition.

[…] Refrain from making negative statements about other candidates, party leaders, Campaigns, Campaign staffers, supporters, news organizations or journalists. This Campaign is about the issues and finding solutions to America's problems. Our job is to differentiate the senator from his opponents on the issues—not through personal attacks.

The Sanders delegate code of conduct contains variations on these same themes.

"I will engage with other delegates, superdelegates, party leadership, and elected officials with respect and a spirit of cooperativeness, even if I disagree with them," states one plank. "I will remain professional even in the face of criticism. I will listen, and not force my opinions on someone if they are not interested in engaging."

"I will acknowledge my own biases and how they might influence me," states another part of the code of conduct. "Biases can influence our decisions, thoughts, and behaviors without us even noticing, until we make a conscious effort to do so."

Chris Liquori, a Sanders delegate from New Hampshire, told the Post, "I think the campaign is trying to avoid, you know, a walkout or some really bad optics a la 2016."

Is it good optics for the Democrats to stifle internal divisions and try to silence members who may be upset with the party's status quo? Not all delegates think so.

"Some of the wording was really stifling what to say," Lori Boydston, a Sanders delegate from Colorado, told the Post. But she said the Sanders people have been willing to talk with delegates about their concerns and try to make changes. "What we really want to do is make sure we're still talking about issues."

But many in the Democratic Party establishment—especially those who've made a hobby of hysterics over "Bernie Bros"—are psyched about the attempt to silence Sanders supporters.

Really want to thank @berniesanders for his many efforts to support unity in fighting Trump, including this: https://t.co/gqzw1ShRAR

The first U.S. cartoonist to be jailed on obscenity charges has finally completed his probation. Cartoonist Michael Diana was convicted of distributing obscene comics in 1994 (for a comic called "Boiled Angel" that explored the "Gainesveille Ripper" serial murders). After a weekend in jail, a judge sentenced him to three years probation. But a probation violation in 1998 led to a new warrant for his arrest.

Diana told the Tampa Bay Times he's relieved. Every time he flies back to New York from another country, he said, he is held up by Homeland Security because of his outstanding warrant. They usually turn him loose upon learning Pinellas authorities won't extradite him over a misdemeanor charge.

He's continued painting and drawing the same things that originally got him in trouble, he said, but now the rest of the world has seemingly caught up. These days he sees Adult Swim shows on the Cartoon Network or images in video games that aren't that different from his 1990s work.

Gyms in Ohio will be allowed to reopen, following a lawsuit filed by Ohio's 1851 Center for Constitutional Law on behalf of local gyms. In a Wednesday ruling, "Lake County Court of Common Pleas Judge Eugene Lucci enjoined Ohio Department of Health Director Amy Acton from penalizing the plaintiffs or similar businesses for violating the lockdown, provided 'they operate in compliance with all applicable safety regulations,'" notes Jacob Sullum.

"The director has no statutory authority to close all businesses, including the plaintiffs' gyms, which she deems non-essential for a period of two months," opined Judge Lucci. "She has acted in an impermissibly arbitrary, unreasonable, and oppressive manner and without any procedural safeguards."

• Must-read: journalist Jia Tolentino on the rumor that her immigrant parents were human traffickers.

• New data on U.S. fertility finds that teen birth rates continue to plummet. "The birth rate for teenagers aged 15–19 declined by 5 percent in 2019 to 16.6 births per 1,000 females," the Centers for Disease Control and Prevention (CDC) reports. That's a 60 percent decline in teen births since 2007 and a 73 percent decline since the teen birth peak in 1991.

• Birth rates were down in older age groups, too, marking record lows for U.S. 20-somethings. For women in their early 30s, the 2019 birth rate remained relatively unchanged; it increased slightly for women in their late 30s and early 40s. See Reason's Ron Bailey for more details.

• A new poll shows Joe Biden easily beating Trump in the 2020 election. The Quinnipiac University poll, conducted May 14-18, found voters preferred Biden to President Donald Trump 50 to 39 percent. "That's up from the 49—41 percent lead Biden held in an April 8th national poll, but the change is within the margin of error," notes Quinnipiac. "Democrats go to Biden 88—5 percent, Republicans go to Trump 87—8 percent, and independents go to Biden 47—36 percent."

• "Just because these laws are limited to speech the government considers false does not mean that only false speech will be deterred": The American Civil Liberties Union is suing over Puerto Rico's "fake news" law.

Journalism promoting punishment uber alles must not be celebrated. Journalism has a responsibility to be part of the solution https://t.co/E76BxzRpwg