When mask-wearing and social distancing rules are legally enforceable, the potential for violence cannot be avoided. 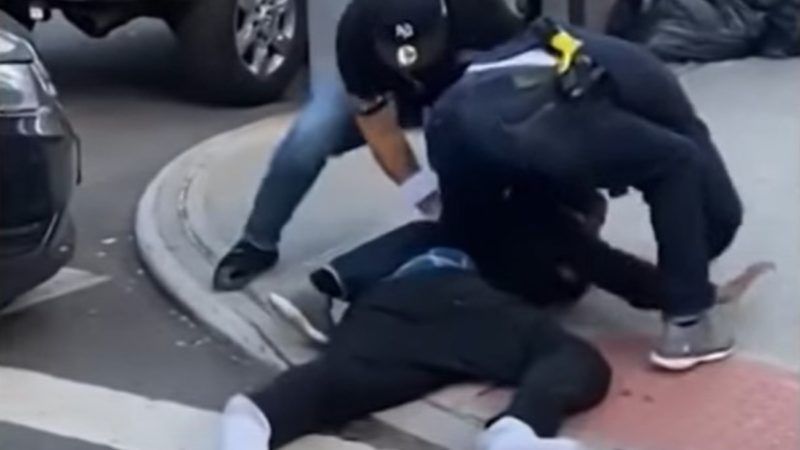 "Of the 125 people arrested over offenses that law enforcement officials described as related to the coronavirus pandemic, 113 were black or Hispanic. Of the 374 summonses from March 16 to May 5, a vast majority—300—were given to black and Hispanic New Yorkers."

So begins a New York Times editorial that recoils at the predictable consequences of a policy that The New York Times supports. When the government orders people, under the threat of hefty fines, to stop working, stay home except for approved purposes, wear face masks in public, avoid "non-essential gatherings of individuals of any size for any reason," and keep their distance from each other, it charges police with enforcing those edicts. The resulting encounters may lead to criminal charges such as disorderly conduct, unlawful assembly, and obstructing governmental administration. Given the long record of racially skewed law enforcement by the New York Police Department (NYPD), it is not at all surprising that the people who bear the brunt of mandatory social distancing are overwhelmingly black and Latino.

Videos of some of the arrests are hard to watch. In one posted to Facebook last week, a group of some six police officers are seen tackling a black woman in a subway station as her young child looks on. "She's got a baby with her!" a bystander shouts. Police officials told The Daily News the woman had refused to comply when officers directed her to put the mask she was wearing over her nose and mouth.

Contrast that with photographs across social media showing crowds of sun-seekers packed into parks in wealthy, whiter areas of the city, lounging undisturbed as police officers hand out masks….

Without a significant course correction, the [police] department's role in the pandemic may look more and more like stop-and-frisk, the policing tactic that led to the harassment of hundreds of thousands of innocent people, most of them black and Hispanic, while rarely touching white New Yorkers. [Mayor Bill] de Blasio has scoffed at the comparison, though it's not clear why.

The "course correction" suggested by the Times—a "public health corps" consisting of "specially trained civilians" who would "fan out across the neighborhoods and parks, helping with pedestrian traffic control and politely encouraging New Yorkers entering parks to protect one another by wearing masks and keeping their distance"—presents problems of its own. While those specially trained civilians presumably would be less likely than police officers to tackle, beat, and tase people for perceived violations of COVID-19 precautions, the potential for violence would still exist.

What would a member of this public health corps do if a parkgoer says he intends to keep his distance from other people but is not willing to wear a mask, since he (correctly) views the risk of virus transmission in an uncrowded, open-air environment as negligible? (Fun fact: In New York, a masked person who "congregates" in a public place with "other persons so masked" is guilty of loitering, a violation punishable by up to 15 days in jail.)

The Times says "the Police Department would play only a minimal role in this approach." But if cops serve as a backstop in responding to recalcitrant pedestrians, we are back to a situation in which social distancing rules are enforced by blatantly violating them through the physical contact and close proximity required to arrest, book, and jail people (which puts them in an environment where the risk of catching COVID-19 is especially high).

We also have to allow for the possibility that disputes between social distancing encouragers (who may not be as polite as they are supposed to be) and uncooperative targets (some of whom will be indignant and perhaps belligerent) will escalate into physical altercations. That danger is by no means theoretical.

The Times cannot have it both ways. If COVID-19 precautions are mandatory, they must at some point be legally enforced, with all the risks that entails, including violence and racial discrimination. The public health payoff might justify those risks in certain contexts—if a dense crowd happens to gather in Central Park, for instance, or if subway riders refuse to wear masks (although that was the situation in the video that the Times cites as evidence of overkill). But the risks cannot be eliminated if voluntary compliance is less than perfect, as it always will be.

Police officers charged with enforcing mask-wearing and social distancing requirements have to constantly weigh the costs of forcible intervention against the likely benefits. As the Times notes, it is not a task they welcome. "This situation is untenable," says Patrick Lynch, president of the New York City Police Benevolent Association. "The NYPD needs to get cops out of the social distancing enforcement business altogether."

But that effectively means mandates will become recommendations. And while most people probably will follow those recommendations, out of concern for their own welfare if not out of consideration for others, some won't. The Times can't will away that tradeoff by pretending it does not exist.