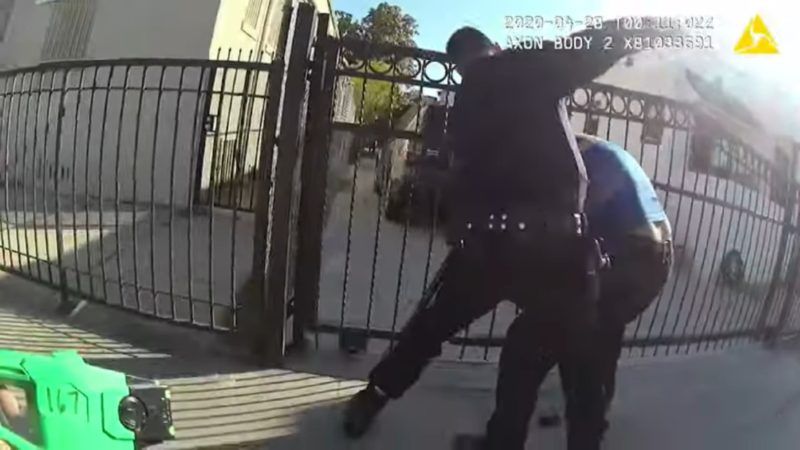 The Los Angeles Police Department (LAPD) released body camera footage from Frank A. Hernandez, the officer who brutalized a trespassing suspect while his hands were behind his back.

Last week, Reason reported on the bystander footage and the LAPD's statement on the use-of-force incident. Hernandez and an unnamed officer responded to a trespassing call on April 27 in the Hollenbeck area. While the suspect's hands were behind his back, Hernandez punched him repeatedly. The suspect sustained "abrasions to his head and face" and Hernandez injured his hand.

Hernandez's lawyer told the Los Angeles Times that the suspect punched Hernandez in the chest during the confrontation. Body camera footage, which was released by the department on Tuesday, shows a different story.

The footage begins with audio of the 911 call reporting the man for camping on the property near a church. According to the LAPD's notes, the confrontation began after Hernandez and the other officer argued with the man about remaining in the area. Hernandez's body camera was not immediately activated, so the audio from early on in the encounter is missing. The rest of the incident is only captured via audio after Hernandez's camera was knocked off.

According to Hernandez's camera, the man walks away from both his tent and Hernandez while taking his bicycle with him. He stops on the sidewalk in front of the church and it becomes clear that he and Hernandez are exchanging words. When the audio activates, the men curse at each other as Hernandez tells him to turn around. The profane argument continues as Hernandez tells the man to put his hands behind his back and spread his feet.

Hernandez says, "Don't fight, man," while the man insists that he's not fighting. A couple of moments later, Hernandez shouts, "Fuck you, man," and begins to use force (captured by an onlooker here).

Hernandez continues to shout, "Fuck you," during the assault. At one point, Hernandez tells the other officer to use her taser.

Body camera footage from the unnamed second officer shows the incident from another angle with uninterrupted audio and video. Prior to Hernandez's assault, the second officer remarks, "They talk big shit until they get in the handcuffs."

Though the man initially reacts negatively to the officers placing their hands on him, he is seen complying with Hernandez's commands to turn around and spread his feet. During the assault, the man does not attempt to fight back. Instead, he covers his head with his hands.

Other officers eventually arrive on the scene. When bystanders try to advocate for the man, Hernandez tells them to "get inside" and claims that he was attacked.

The videos are available here.

Prior to the release of the footage, the Los Angeles Times reported that Hernandez had been involved in three shootings while on the job.

In one of the shootings, Hernandez shot an innocent bystander in the leg, possibly out of confusion during a chase. The LAPD brought charges against the bystander, which were eventually dropped. The bystander then accused the LAPD of fabricating the charges to cover for Hernandez, who was cleared in the shooting.