Meet the Press Mangles a William Barr Quote to Make Him Look Awful, and It Backfires

There are a lot of reasons to critique the attorney general. Find one that doesn’t require misleading your audience. 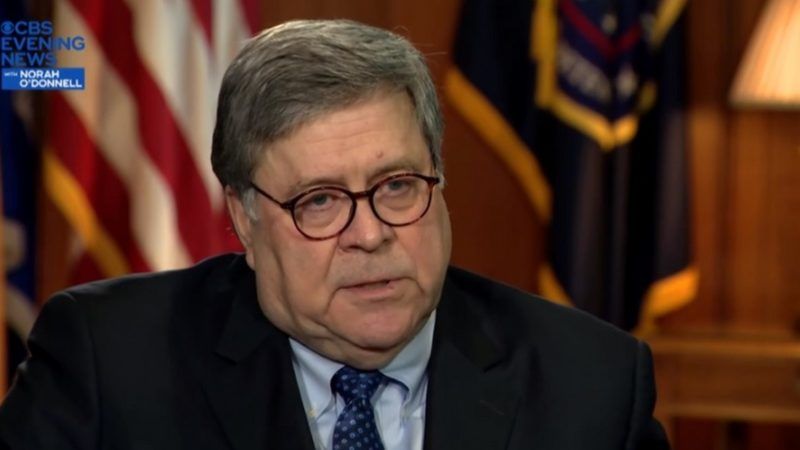 It takes a lot of work to make Attorney General William Barr look like a victim, but Meet the Press host Chuck Todd is up to the task.

Last week the Department of Justice made the surprising decision to recommend dropping charges against former National Security Advisor Michael Flynn for lying to the FBI. Many critics of President Donald Trump saw this as further evidence of corruption in the executive branch.

On Thursday, CBS reporter Catherine Herridge sat down with Attorney General William Barr to get his explanation of his decision. The interview isn't terribly long. Barr says that Flynn's lie to the FBI was not "material" under the law because the investigation of Flynn did not have a valid justification, and he argues that Flynn's conversations with a Russian ambassador were legitimate work as a representative of Trump's transition team. These facts, he suggests, justify dropping the charges.

Reasonable people can agree or disagree. (I think Barr's actually right here, though I wish he'd apply this standard to other people the FBI catches in a lie.) But on Meet the Press, Todd focused on another part of the interview, which he selectively edited to attack Barr. Toward the end of the interview, Herridge asks Barr, "When history looks back on this decision, how do you think it will be written? What will it say about your decision making?"

Well, history is written by the winner. So it largely depends on who's writing the history. But I think a fair history would say that it was a good decision because it upheld the rule of law. It helped, it upheld the standards of the Department of Justice, and it undid what was an injustice.

But when Todd got his hands on it for Meet the Press and presented it for discussion, the quote cut off after the second sentence. Todd then told guest Peggy Noonan that he was "struck by the cynicism of the answer. It's a correct answer, but he's the attorney general. He didn't make the case that he was upholding the rule of law. He was almost admitting that, 'Yeah, that this was a political job.'"

Todd's description is the exact opposite of what actually happened in the interview. As much criticism Barr deserves for his authoritarian view of the law, his support for harsh sentencing, and his broad interpretations of the power of the president, he spends much of this interview (not just this one answer) attempting to make the case that he is, in fact, upholding the law.

A spokesperson with the Department of Justice tweeted out her objection to the show's selective editing. The Twitter account for the show subsequently tweeted an apology: "Earlier today, we inadvertently and inaccurately cut short a video clip of an interview with AG Barr before offering commentary and analysis. The remaining clip included important remarks from the attorney general that we missed, and we regret the error."

But that's only part of the trouble, assuming the clip was indeed "inadvertently and inaccurately cut short." The bigger problem is that either Todd was oblivious to the interview's content aside from than those two sentences (meaning he didn't actually watch the interview before discussing it on his show) or was deliberately attempting to mislead the audience. I don't know which possibility is worse.

Either way, he has fueled further distrust in the media, which Trump has been happy to use for his own purposes.