Some officials want to reevaluate enforcement of low-level, nonviolent offenses during the pandemic. For others, it's business as usual. 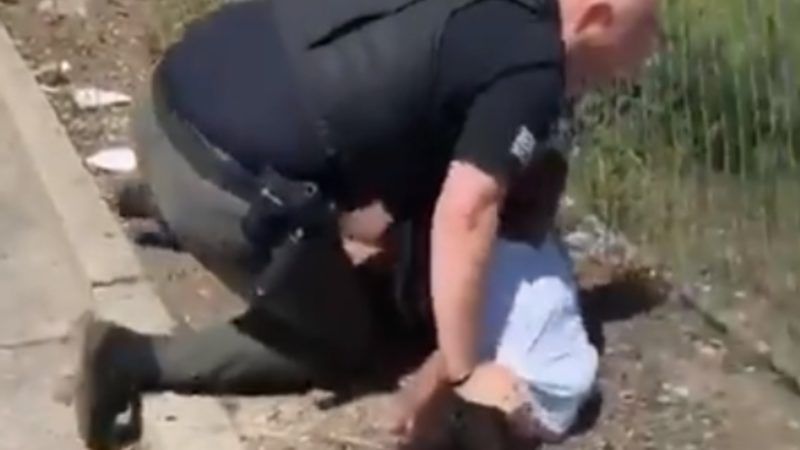 Given the COVID-19 pandemic, some officials have rolling back enforcement of low-level offenses. But many police continue to use force against nonviolent offenders, social distancing be damned.

A video shows one such interaction between a California cop and a teenager. The teen's crime: possessing "tobacco products."

The short clip shows a deputy with the Rancho Cordova Police Department (RCPD) detaining a 14-year-old on Monday. The deputy, who is already on the ground with the teenager, is seen attempting to flip the boy onto his stomach. When faced with resistance, the deputy shoves the boy's face into the ground and then punches him repeatedly.

RCPD brutally tackled and hit my best friend's 14 year old brother today over a swisher sweet! The officer had no reason to brutalize and traumatize this boy like this! He has a pre existing health condition which could be fatal under this kind of stress! Unjustifiable! pic.twitter.com/94fqyu3J28

New York criminal defense attorney Rebecca Kavanagh shared the video, saying that the deputy accused the boy of smoking marijuana earlier. A woman identifying herself as the teen's older sister tweeted that he has a "serious heart condition that could be triggered very easily by being hit in his chest/back."

Reason reached out to the RCPD on Tuesday for further explanation. The request went unanswered, but the department subsequently released a statement on its website and social media platforms.

"These are the facts as we understand them at this time," the department wrote, adding that an investigation was underway and the story was "subject to change." The officer (not named) had reportedly been "proactively patrolling" the area between Mills Station Road and Mather Field Road, due to complaints about the sale of alcohol, drugs, and tobacco to minors. Believing he witnessed such an exchange, the deputy approached the teen. (The statement says he lost sight of the adult conducting the sale.) The boy initially refused to provide identifying information, then later told the deputy he was 18. When the deputy tried to detain him, the teen knocked the deputy's handcuffs out of his hands; the deputy then restrained him without handcuffs while waiting for his partners to arrive.

The teen was ultimately found to possess some "tobacco products," and he was subsequently cited and released.

Because of the unique threat the COVID-19 pandemic poses to corrections facilities, several counties have reprioritized enforcement of low-level, nonviolent offenses. Evidently, the call has not extended far enough.