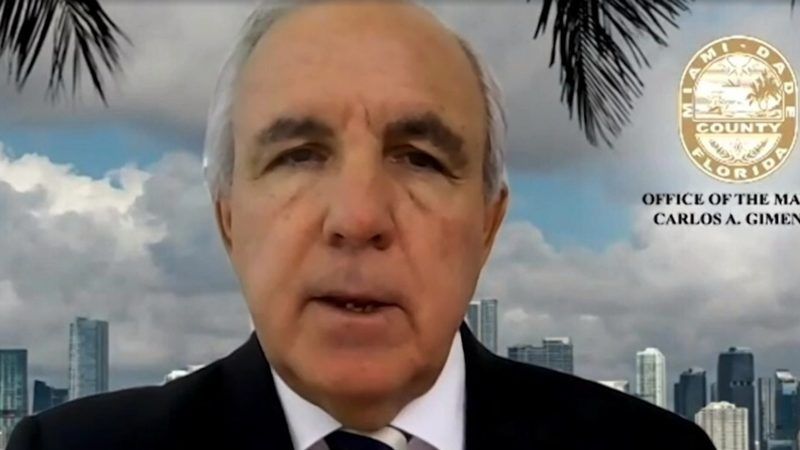 Antibody tests in Miami-Dade County, Florida, suggest that something like 6 percent of local residents have been infected by the virus that causes COVID-19. That finding implies about 165,000 infections, or more than 16 times the official tally of confirmed cases when the results were announced on Friday. Based on the current Miami-Dade death toll, those results suggest a fatality rate of about 0.2 percent among people infected by the virus, similar to results from Santa Clara County and Los Angeles County in California but about one-third the rate implied by antibody tests in New York.

Miami-Dade Mayor Carlos Gimenez said "more than half" of the people who tested positive for antibodies reported no symptoms consistent with COVID-19 during the previous seven to 14 days. That finding is similar to the results of virus testing in Iceland, where about half of the volunteers from the general population who tested positive for the virus reported no symptoms.

"There are a lot of asymptomatic cases out there," Gimenez said, which is "something that we've known all along." Confirming that point highlights the importance of social distancing, he added, since carriers may not realize they are infected.

One concern raised by the antibody studies is the representativeness of the samples. The Santa Clara County study, which was conducted by researchers at Stanford University, was criticized for soliciting subjects through Facebook ads, which may have biased the sample toward people worried that they had been infected. The University of Southern California (USC) researchers who conducted the Los Angeles County study drew a random sample from a database maintained by a market research firm, capping participants from particular demographic categories so the sample would reflect the county's general population.

The Miami-Dade study, which was conducted by researchers at the University of Miami, was based on a random sample of about 1,400 people contacted through automated phone calls. Gimenez emphasized that the sample was designed to be representative of the county's population.

In New York, the state health department randomly selected about 3,000 subjects from shoppers across the state, which could have biased the sample in two different directions. Assuming that people who are feeling unwell or who think they may have been exposed to the COVID-19 virus are less likely to be out and about, the prevalence estimates—about 14 percent statewide and 21 percent in New York City—might be lower than the true rates. But if shoppers overrepresent people who have recovered from COVID-19 or who are more likely to have encountered carriers because they are more inclined to venture outside their homes, the true prevalence could be lower than the results suggest.

Another concern about these studies is the accuracy of the antibody tests. The Santa Clara County and the Los Angeles County studies both used tests manufactured by the Chinese company Hangzhou Biotest Biotech and distributed in the United States by Premier Biotech, which is based in Minneapolis. In validation tests, those kits generated false-positive results in two out of 371 samples, meaning the tests erroneously indicated the presence of antibodies 0.5 percent of the time. Subsequent tests of 30 samples drawn from non-COVID patients at Stanford Hospital did not generate any false positives.

In the Santa Clara County study, just 1.5 percent of about 3,300 samples tested positive. But after adjusting the results for ZIP code, race, and sex, the researchers estimated that roughly 3 percent of the county's residents had been infected as of early April. Critics of the study argued that plausible false-positive rates could make those results highly misleading. The authors of the study are working on a revised version that they say will address that point as well as the issue of sampling bias.

In Los Angeles County, the lead researcher, USC public policy professor Neeraj Sood, expressed confidence in the accuracy of the antibody tests. In that study, about 4 percent of the 863 subjects, who were selected to be representative of the county's adult population, tested positive for antibodies. "We think that the false-positive rate of the tests is really low," Sood said.

State researchers in New York developed and validated their own antibody tests "with federal approval," The New York Times reports. It's not clear what the false-positive rate might be.

The Miami-Dade study used tests produced by the North Carolina company BioMedomics. The company reports that its test generated 12 false positives out of 128 samples from uninfected people, meaning the results were erroneous more than 9 percent of the time—much higher than the false-positive rate for the Premier Biotech kits. Gimenez did not specifically address false positives, although he noted that antibody tests have "known limitations."

Keeping in mind the potential problems with sampling and test accuracy, as well as the preliminary nature of the results, the four studies in California, New York, and Florida are broadly consistent in finding that the total number of infections far exceeds the number of confirmed cases. That result is not surprising, since virus testing in the United States so far has been skewed toward people with severe symptoms, who are not representative of everyone who has been infected. But the size of the gap between total infections and confirmed cases, which is crucial in estimating the infection fatality rate (IFR), remains controversial.

The estimated ratio of infections to confirmed cases covers a wide range in these studies: around 10 in New York, 16 in Miami-Dade, 40 in Los Angeles County, and nearly 70 in Santa Clara County (based on the middle estimates). Testing rates might explain some of this variation. New York has conducted more than three times as many COVID-19 tests per capita as California. Florida also has conducted more tests per capita than California has, although the difference (about a third) is much smaller.

If more aggressive testing detects a larger share of relatively mild cases, it might help explain why undocumented infections seem to be more common in California than in New York. Then again, New York may have tested more of its population simply because it has been hit harder by the epidemic.

Applying the IFR estimates from California and Florida to New York City leads to implausible, if not outright impossible, prevalence estimates that are inconsistent with the results of New York's antibody study. The explanation might be that the numbers from California and Florida, suggesting an IFR in the neighborhood of 0.2 percent, are wildly off. Perhaps the IFR implied by the New York results, around 0.6 percent, is closer to the truth.

It is also possible that the IFR is actually higher in New York, and especially in New York City, than in other parts of the country. In New York City, somewhere between 7 and 11 percent of confirmed cases have resulted in death (depending on whether you include "probable" COVID-19 deaths). That is much higher than the current crude case fatality rate (CFR) for the United States (5.6 percent), for California (nearly 4 percent), and for Florida (3.4 percent).

The crude CFR tends to rise as the epidemic progresses in a particular place, partly because there can be a lag of several weeks between infection and death (assuming a median incubation period of five days and an average time of 18 days between symptom onset and death). But in light of the recently documented COVID-19 death on February 6 in Santa Clara County, it seems the virus was already spreading in the San Francisco Bay Area by mid-January. New York and Florida both reported their first confirmed COVID-19 cases on March 1; they reported their first deaths on March 14 and March 6, respectively.

In other words, it does not look like New York City's remarkably high crude CFR can be explained by the advanced stage of its epidemic. An alternative explanation is  overburdened hospitals, which might have led to worse outcomes for COVID-19 patients. New York City's very high population density, in addition to helping the virus spread more there than in other areas of the country, may also have made it harder to protect especially vulnerable people from COVID-19.

Another possible explanation, much more speculative, is that New Yorkers happened to be hit by a deadlier strain of the virus. While Chinese researchers have identified two major strains, one of which seems to be more transmissible, it is not at all clear that one is more lethal than the other. But we do know, based on genetic analyses of the coronavirus, that New York City's epidemic was seeded by dozens of international travelers, primarily from Europe. By contrast, Jeanna Bryner notes on Live Science, California "had about eight initial introductions, mainly from Asia."

An antibody screening project that the U.S. Centers for Disease Control and Prevention (CDC) launched earlier this month should shed more light on the prevalence and lethality of the COVID-19 virus. The CDC is analyzing blood samples from people who were never diagnosed with COVID-19 in various locations affected by the epidemic. It also plans to begin conducting a nationally representative survey this summer. While the information gleaned from that research will come too late to shape the COVID-19 responses that have already imposed a tremendous economic cost on Americans, it may provide valuable guidance to policy makers as they decide when and how to relax sweeping restrictions aimed at curtailing the epidemic.