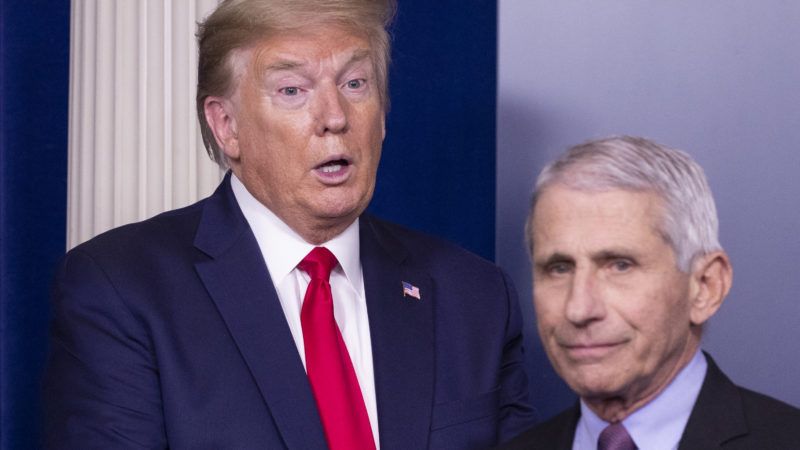 Last week, President Donald Trump was calling for Americans living under shelter-in-place orders to "liberate" their states. Now he's condemning governors for daring to take his advice. On Wednesday, Trump said it's "too soon" for reopening plans like the one Georgia plans to implement on Friday.

The about-face provides even more evidence that Trump's big "liberation" energy was nothing more than a cynical political calculation.

It goes something like this: Push loudly for "reopening the economy"—knowing full well that local leaders, state authorities, and many individuals will resist. When collective reluctance to rush back to normalcy keeps the COVID-19 death toll lower than it otherwise might be, point to the low death toll as evidence that people were overreacting about the virus all along. As we draw closer to the election, Trump can then claim that the country's economic pain could have been avoided if only everyone had listened to his advice by going out to eat and swarming the beaches months earlier.

But Trump only gets to have his cake and eat it if the U.S. avoids a massive spike in new COVID-19 cases and many more deaths. And that's less likely to happen if local leaders and business owners aren't extremely careful about how and when they decide to open things back up.

Doing it too soon or too haphazardly will not only mean more COVID-19 infections but longer and worse economic hardship, unemployment, and unrest (and no boost for Trump come November). A president can sometimes survive mass unemployment or mass deaths, but probably not both.

It's no wonder Trump is now acting like he never meant for people like Georgia Gov. Brian Kemp to allow movie theaters, gyms, bowling alleys, and a broad swath of other businesses to open back up on Friday.

"Maybe you wait a little bit longer until you get to a phase two," Trump said during his nightly televised Q&A session on Wednesday. "I'm going to let him make his decision, but I told him, I totally disagree."

Trump added that "it's just too soon" for the likes of "spas and the beauty parlors and the barber shops"—the very types of small business owners out protesting shutdown orders— to open up.

I plead with the American public, with the governors, with the mayors for the people of your responsibility, although I know one has the need to leap frog over things, don't do that. Do it in a measured way. This is a successful formula. The problem is if we don't do that, there is a likelihood that we will have a rebound.

"According to some models," Georgia is "one of the last states that should be reopening," suggest Washington Post health reporters. "The state has had more than 830 covid-19 deaths" and "tested less than 1 percent of its residents," with "the limited amount of testing so far shows a high rate of positives at 23 percent."

And you already know how the next step goes.

If everything works out in Georgia, it will be because Trump said re-opening the economy was the right thing to do.

And if Georgia turns into the next NYC, it will be all Brian Kemp's fault and Trump warned him not to do it.

Good piece from @Ashkhen on how we can use technology to do contact tracing while still protecting privacy.

The first ever YouTube video was uploaded 15 years ago today https://t.co/O39Qcw5fjr

• "I didn't say that this was going to be worse. I said it was going to be more difficult," CDC Director Robert Redfield said yesterday, asked to clarify his earlier comment to The Washington Post that "there's a possibility that the assault of the virus on our nation next winter will actually be even more difficult than the one we just went through." Trump had tried to claim earlier in the day that Redfield had been "totally misquoted by Fake News."

• There's more evidence that COVID-19 was infecting Americans earlier and in greater numbers than initially realized. "By the time New York City confirmed its first case of the coronavirus on March 1, thousands of infections were already silently spreading through the city, a hidden explosion of a disease that many still viewed as a remote threat as the city awaited the first signs of spring," reports The New York Times.

Weekly jobless claims come in at 4.4 million, against expectations of 4.2 million.

Over the last six weeks, there have now been over 26 million that have filed for unemployment benefits. Still hard to imagine.

• An Illinois judge cleared the way for the Libertarian Party to get on the state's ballot even though COVID-19 has prevented traditional methods of gathering signatures to petition for obtain ballot access. Brian Doherty explains how.

• Why isn't Canada seeing the same supermarket shortages as the U.S.?

• The return of drive-ins?

• You're Wrong About podcast looks at the 1980s Satanic Panic:

I become libertarian when I see people's resourcefulness around stupid rules. pic.twitter.com/5pq9Scucii