The president contemplates a sweeping exercise of executive authority. 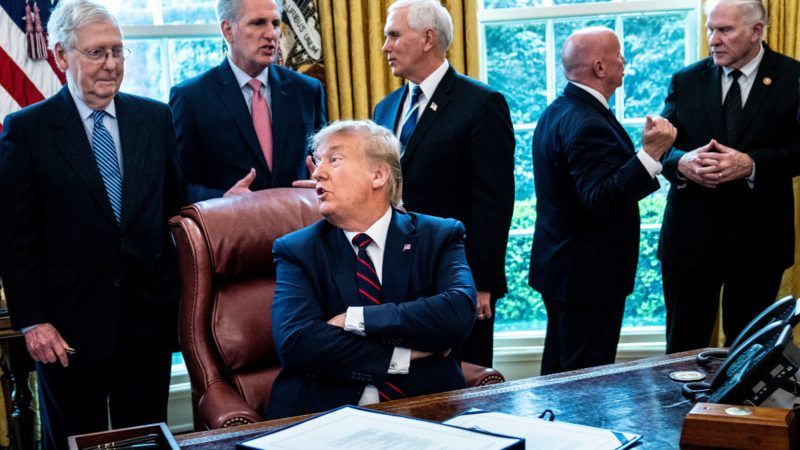 President Donald Trump has grown impatient with Congress. The COVID-19 outbreak has brought normal business to a near standstill in Washington, D.C., and the Senate is no longer confirming Trump's nominees to federal office at the steady clip that it once did. So Trump is now threatening an end-run around the Senate's constitutional duty to provide "advice and consent" on presidential picks.

"The Senate should either fulfill its duty and vote on my nominees or it should formally adjourn so that I can make recess appointments," Trump said on Wednesday. "If the House will not agree to that adjournment, I will exercise my constitutional authority to adjourn both chambers."

To be clear, the president has no independent authority to send Congress home. Rather, under Article 2, Section 2 of the Constitution, "in Case of Disagreement between [the Senate and the House of Representatives], with Respect to the Time of Adjournment, he may adjourn them to such Time as he shall think proper." In other words, in the rare instance in which the Senate and the House cannot together settle on a time for Congress to adjourn, the president may then—and only then—get involved. Since no such disagreement over the time of adjournment currently exists between the Senate and House, Trump currently has no power to act in this fashion.

Trump is not the first president with the bright idea of expanding executive power by misusing the Recess Appointment Clause, which grants the president the limited authority "to fill up all Vacancies that may happen during the Recess of the Senate, by granting Commissions which shall expire at the end of their next Session."

In 2005, for example, President George W. Bush, who was then butting heads with Senate Democrats over the fate of several of his nominees, simply waited until the Senate went home for its winter break and then made 17 recess appointments. The Senate reacted to this executive overreach with a novel defensive tactic: A member would remain on hand during future breaks in order to gavel the body into a pro forma session every few days, thus preventing the Senate from ever technically going into recess. That did the trick. As New York Times reporter Charlie Savage noted, "Senate Democrats repeated the move during breaks for the rest of Mr. Bush's presidency, and Mr. Bush did not try to make any further recess appointments."

President Barack Obama proved to be even more overreaching than Bush. In 2012, while the Senate was holding a pro forma session, Obama went ahead and made four purported recess appointments, including the addition of three members to the National Labor Relations Board. The unseemly act of making recess appointments when the Senate was not actually in recess earned Obama a 9-0 rebuke from the U.S. Supreme Court. "In our view," declared Justice Stephen Breyer in National Labor Relations Board v. Noel Canning, "the pro forma sessions count as sessions, not as periods of recess." Therefore, "We hold that, for purposes of the Recess Appointments Clause, the Senate is in session when it says it is."

Breyer's Noel Canning opinion also anticipated the Trump scenario. The Recess Appointment Clause, Breyer wrote, "gives the President (if he has enough allies in Congress) a way to force a recess."

Here's what that might mean in the present context: Assume that Senate Majority Leader Mitch McConnell (R–Ky.) likes the sound of Trump's scheme to bypass the Senate in order to have a free hand to make recess appointments. So long as McConnell and his allies are willing to abdicate the Senate's "advice and consent" role, McConnell could, theoretically, engineer an adjournment battle with the Democratic-controlled House, thus paving the way for Trump to step in. But as Rep. Justin Amash (I–Mich.) correctly pointed out on Twitter, "Without one chamber participating in this improper scheme, [Trump's] action would be unconstitutional."