The lawsuit is the latest in a string of frivolous suits the president's reelection campaign has filed against media outlets. 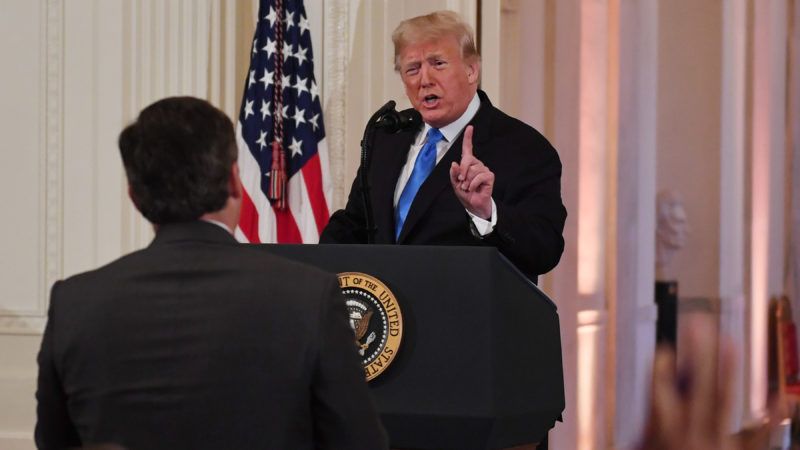 Donald Trump's reelection campaign has sued a Wisconsin TV station for running a political ad attacking the president's handling of the COVID-19 pandemic.

Priorities USA, a political action committee that supports Democratic candidate Joe Biden, produced the ad. It uses sound bites from Trump's press conferences—"the coronavirus, this is their new hoax," "we have it totally under control," "we've done a great job in keeping it down to a minimum"—played over a chart showing the precipitous rise in the number of Americans infected with the virus.

"It is disappointing that WJFW-NBC would knowingly continue to broadcast this blatantly false ad and perpetuate falsehoods on the American people, even after the Trump campaign provided proof in good faith of the ad's falsity," Jenna Ellis, a senior adviser for Trump's reelection campaign, said in a statement. "We fully expected the station would recognize their error and immediately cease under their FCC [Federal Communications Commission] obligations. The Trump campaign is now left with no other option than to use the force of law to ensure these false and defamatory ads cease. Defamation law helps ensure that news outlets are accountable to viewers, who should be able trust [sic] the accuracy and truth of content aired to the public."

The lawsuit is the latest in a string of defamation suits filed by the Trump campaign against media outlets. In February, it sued The New York Times, followed by another suit against the Washington Post in March. Both of those defamation claims concerned opinion pieces about the Trump campaign's alleged collusion with Russia.

A Washington Post fact-checker concluded last month that the Priorities USA ad deceptively edits Trump's "hoax" comment, which was in the middle of a longer rant about Democrats' claim that his administration was doing nothing to halt the spread of the virus.

The Trump campaign previously threatened television stations in March, warning in cease-and-desist letters that they could have their broadcast licenses yanked for running the commercial.

Running the ad "could put your station's license in jeopardy," the campaign told the stations. "Your station has an obligation to cease and desist from airing it immediately to comply with FCC licensing requirements."

The FCC doesn't appear to have grounds to act against the stations for airing contentious ads, said Jack Goodman, a Washington broadcast attorney, said in an interview. The ad "is core political speech" protected by First Amendment guarantees of free speech, Goodman said.

"This is the sort of letter that stations get in political years, day in and day out," Goodman said. "It's intended to intimidate."

Trump has declared many times that libel laws should be "opened up" to remove the strong protections that news outlets have enjoyed from defamation lawsuits since the landmark 1964 Supreme Court case New York Times v. Sullivan.

Trump and his proxies likely have little to no intention of fully pursuing these suits in court, which would open the president up to discovery—a prospect The New York Times gleefully noted when threatened by Trump in the past.

But that doesn't mean that they won't have an effect. "The concern here is not that one of these suits would win on the merits—it's the chilling effect that it has on public discussion of political affairs," Columbia Journalism Review correspondent Jonathan Peters told The Hill.

These efforts are ham-fisted attempts to use the threat of legal action to punish the president's critics and to show his base that he fights the Fake News. There's a term for this tactic: "strategic lawsuit against public participation," or SLAPP.

There are less cumbersome words that also apply. Such as "bullying."