Most Politicians Are Disingenuous Opportunists. The Coronavirus Outbreak Only Makes That More Obvious.

Politicians are merely using COVID-19 to push for policies they already wanted. 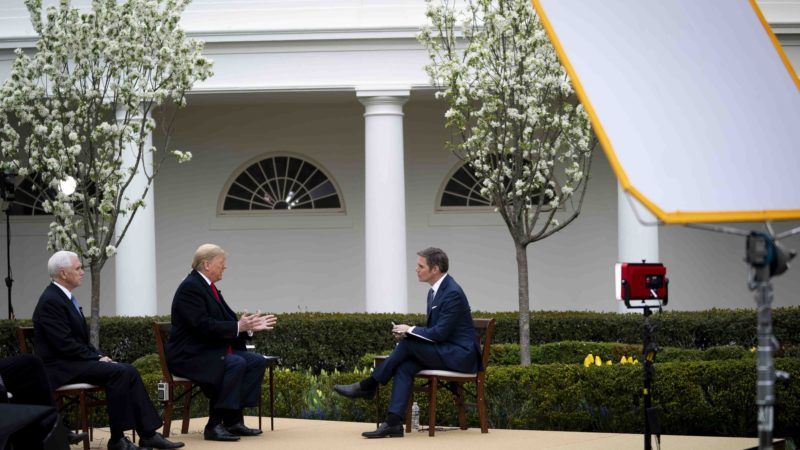 One month and one day ago, President Donald Trump took to Twitter to declare that the COVID-19 outbreak was "very much under control in the USA."

"Stock market starting to look very good to me!" the president declared.

Since then, the Dow Jones Industrial Average has lost about 25 percent of its value—and that's after a significant uptick on Tuesday. Also, the COVID-19 outbreak is very much not under control in the United States, as you've probably noticed.

A few weeks before the president sent that tweet, members of the Senate Intelligence Committee were given a classified briefing about the coronavirus. Sen. Richard Burr (R–N.C.), the chairman of the committee, immediately sold more than $1.7 million in stocks. Publicly, however, he downplayed the threat posed by the virus. "The United States today is better prepared than ever before to face emerging public health threats, like the coronavirus," Burr wrote in an op-ed for Fox News on February 7—though he reportedly delivered a much more alarming message to a small circle of friends and campaign donors around the same time.

After weeks of dismissing the pandemic as no biggie, Trump was suddenly taking the outbreak more seriously by the first week of March. "There is no testing kit shortage, nor has there ever been," the president assured Americans while he took a televised tour of the Centers for Disease Control and Prevention (CDC) on March 6. "Anybody that wants a test can get one."

That wasn't true. And when it became too obviously untrue for even Trump to deny, the president said, "I don't take responsibility at all," when asked about the very-obvious-and-quite-alarming lack of testing kits on March 13.

With millions of Americans out of work and the country facing the prospect of a recession unlike any in recorded history, Congress got to work on a stimulus package that was supposed to tide workers over until the virus passed and the economy reopened. Partisan disagreement sank a Senate coronavirus bailout bill on Monday, so Speaker of the House Nancy Pelosi (D–Calif.) rode to the rescue with a $2.5 trillion spending plan that included such pandemic essentials as $35 million in funding for a performing arts center in Washington, D.C., new rules requiring more diversity on corporate boards, and new emissions requirements for airplanes.

Pelosi withdrew that proposal on Tuesday afternoon. But the $2 trillion spending bill that appears ready to pass the Senate on Wednesday contains a few questionable provisions of its own, like codifying regulations that limit arbitration agreements, a huge giveaway to trial lawyers.

Having failed to predict the future at the beginning of the outbreak, Trump is now determined to rewrite the past. "I have always known this is a real pandemic," he said on March 17. During an appearance on Fox News on Tuesday, the president said he took decisive action to slow the advance of the virus "very early" despite taking "a lot of heat" from unnamed others who disagreed with him.

All of this is, on one hand, an extension of the thesis that politicians are merely using the coronavirus outbreak to push for policies they already wanted—or, more broadly, that they are behaving the way they always did. Congress has an incentive to do favors for friends and politically-connected industries. Individual members of Congress are self-interested human beings willing to profit off their positions. Trump wants the stock market to go up and doesn't want to be held responsible for anything. None of this is new information.

Yet, at another level, this constellation of individual actions becomes a damning portrait of a system that is neither trustworthy nor trying to gain that trust. Libertarians should know better than to expect elected and appointed officials to be angels, of course, but the coronavirus outbreak has once again exposed the extent to which they are, with rare exception, little more than disingenuous opportunists.

"If you want to know why people are so vulnerable to conspiracy theories and to misinformation," writes Kevin Williamson at National Review, "it is in part because they believe that they are being lied to by those with whom they have entrusted great power, that the truth is being kept from them by design."

Consider merely the past 24 hours. On Tuesday, Trump declared his intention to have the country back to normal by Easter Sunday (April 12). Early Wednesday morning, however, Congress struck a deal with the White House to pass a $2 trillion spending bill that's being pitched as a vital mix of stimulus and bailouts intended to keep the country from slipping into a prolonged recession. But if things are going to be back to normal in less than three weeks, why is a massive stimulus necessary? Someone isn't telling the truth.

Add into the mix the various and sundry failures of the so-called fourth branch of government: the bad regulations at the Food and Drug Administration (FDA) that continue to slow the deployment of masks to places where they are needed, the CDC botching the COVID-19 testing rollout.

There will be heroes that emerge out of this. Doctors, nurses, medical students who are allowed to graduate early so they can join the fight against the coronavirus are leading contenders. Private businesses that are surging their operations to supply more medical gear deserve mention. But when all of this is over, we should also remember that government officials mostly did what they can always be counted on to do. They're doing little but standing in the way, deflecting blame, and seeking to exploit human suffering for a political agenda, or merely to boost their own chances of re-election.