Robert Lighthizer, head of the Office of the U.S. Trade Representative, says tariffs aren't hurting America's response to the virus. He's also lifting those tariffs to help with the response. 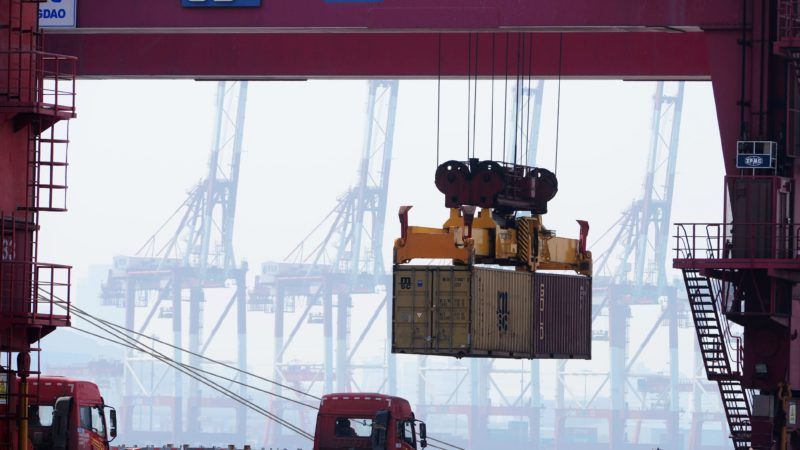 The Trump administration ignored the warnings of medical professionals who said hiking tariffs on Chinese imports would reduce America's ability to respond to a public health crisis—like the one the health care system is currently facing.

But amid the COVID-19 outbreak, U.S. Trade Representative Robert Lighthizer is still trying to defend the Trump administration's actions. After numerous news outlets (Reason among them) reported last week on the disastrous consequences of Trump's trade policy as it relates to the ongoing shortage of coronavirus-fighting medical equipment, Lighthizer took to the pages of The Wall Street Journal to defend the administration's actions. His arguments are misleading at best and, in the end, actually serve as an admission that Trump's anti-trade policies have indeed harmed America's preparedness for an outbreak.

First, Lighthizer points out that "the administration imposed no new tariffs on several key products needed to fight the virus like breathing masks, oxygen masks, ventilators, and nebulizers."

This is true. Unfortunately, the same cannot be said about many other products. Hand sanitizer, patient monitors, thermometers, oxygen concentrators, medical protective clothing, sterile gloves, and more were targeted with tariffs in three phases since July 2018. Those tariffs were imposed despite repeated warnings from medical professionals that they would disrupt supply chains and erode the health care industry's ability to respond to a crisis, as Reason reported last week.

Unsurprisingly, American imports of those Chinese-made medical products fell by 16 percent between 2017 (the last full year before Trump's tariffs) and 2019.

Secondly, Lighthizer admits that "imports of certain other medical products from China have declined since tariffs were imposed," but argues that those declines have been offset by an increase in imports from other countries.

"The evidence that I presented does not show that," says Chad Bown, senior fellow at the Peterson Institute for International Economics.

It was Bown's research that served as the basis for the Journal piece to which Lighthizer was responding. What that research shows, in fact, is that American imports of products form the rest of the world (not counting China) increased by about 23 percent in 2017 (the last full year before the anti-China tariffs), and again by 23 percent in 2018. In other words, Bown explained in an email to Reason, America was buying more products from all sources before the tariffs—likely the product of having an aging population that was demanding more health care—but imports from non-China sources did not increase at a faster rate as Chinese imports declined.

Even if you give Lighthizer the benefit of the doubt on this point—that is, let's pretend that imports from other parts of the world did offset the decrease in imports from China—Americans still end up as losers in the trade war.

"Even if we import the same amount now as before, we pay higher prices, and thus endure unnecessarily high costs of preventing and treating coronavirus," points out Don Boudreaux, a professor of economics at George Mason University.

Thirdly, Lighthizer argues that the whole thing has been blown out of proportion because "the U.S. Trade Representative granted immediate exclusions from [the China tariffs] for all critical medical products weeks ago."

In other words, he wants credit for undoing the very policies that he's also claiming didn't actually harm America's coronavirus response. If they didn't matter, one might wonder, why undo them?

The obvious answer is that the Trump administration knows full well that the tariffs were a barrier to importing medical equipment that would be critical to fighting the coronavirus. They know that because medical professionals literally told them so at public hearings about the China tariffs.

Removing the tariffs was the right thing to do, but Lighthizer and Trump don't get to take credit for choosing on March 10 to lift barriers that they were responsible for imposing in the first place, nor do they get credit for the fact that they left the tariffs in place until well after COVID-19 had reached American shores.

The Trump administration is now seeking public comments on those recent modifications to the China tariffs as they apply to medical equipment. It ought to be eye-opening to see what members of the health care industry and medical professionals have to say.

Hopefully, this time, Trump and Lighthizer will listen.