One of the officers was fired after arresting two 6-year-olds in one day. 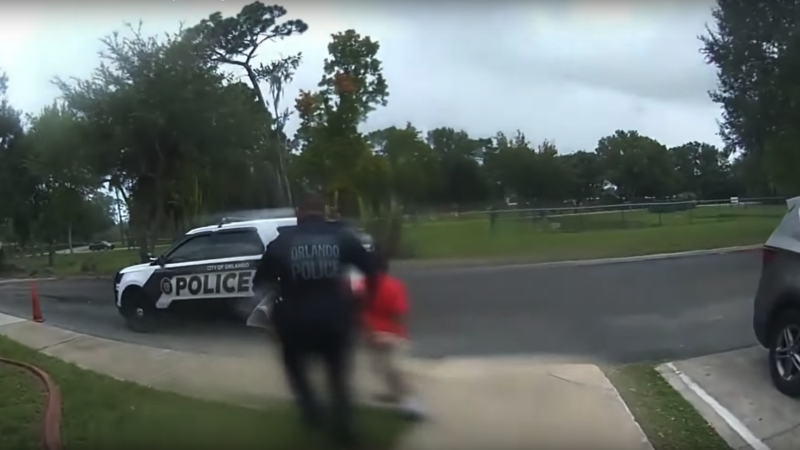 Body camera footage released today shows the arrest of a Florida 6-year-old last year that sparked national outrage and led to the firing of the police officer involved.

The family of Kaia Rolle shared body camera footage with media outlets showing former Orlando police officer Dennis Turner and another officer putting zip-ties around the small child's wrists and leading her outside to a police car as she cries and begs to be let go.

"What are those for?" Rolle, a first-grader at an Orlando-area charter school, asks as the officer bring out the zip-ties.

"They're for you," Turner responds.

Rolle's alleged crime was throwing a tantrum and striking three school employees. She was charged with misdemeanor battery, although the charges were quickly dropped. Rolle's grandmother said the girl suffered from a sleep disorder that led to her tantrums.

After Kaia was placed in a police SUV to be taken to the Juvenile Assessment Center, Turner returned to the school's office and spoke to administrators, who were concerned about Kaia. He downplayed the juvenile detention center, saying it's "not like you think."

He told them he had arrested 6,000 people in his career—the youngest, to that point, was 7. When school employees told him Kaia was 6, not 8 like he thought, he did not seem concerned.

"Now she has broken the record," he said.

In fact, Turner arrested another 6-year-old in an unrelated incident that same day.

The national condemnation that poured in after the story went viral led to the officer's firing. Arrests of small children are unusual but not unheard of, however. Stories like this pop up every few years. In 2006, it was a St. Petersburg, Florida, 5-year-old who was handcuffed and arrested in school.

According to data from the Florida Department of Juvenile Justice, Florida police arrested 2,781 children between the ages of five and 12 in fiscal year 2018-2019. The youngest was a 5-year-old Hispanic boy, who was charged by the Osceola County Sheriff's Office with felony aggravated assault. Florida law enforcement arrested five 6-year-olds and 10 7-year-olds that year on charges ranging from larceny to disorderly conduct to obstruction of justice.

In most places, there is no minimum age for when a child can be arrested and charged with a crime. Thirty four states have no lower age limit for delinquency, while 11 states place the floor at 10 years old.

Meanwhile, zero tolerance policies are leading to absurd cases like a Pennsylvania school that called the cops on a 6-year-old girl with Down syndrome who made a finger gun gesture at her teacher and said, "I shoot you."

As I wrote in a recent column for Reason on child arrests, "The criminal justice system has become America's default solution for all of its social problems, and that mentality has oozed into the classroom."