Instead of destroying the political gatekeepers, we've merely handed the keys to the populists. 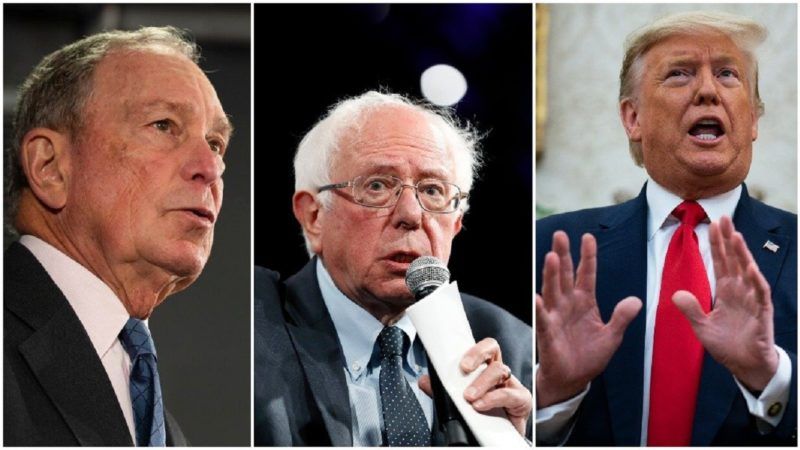 It is tempting to point and laugh—or at least chuckle a little bit—at the current, sad state of America's two largest political parties.

One has been consumed by a cult of personality built around a man who holds few of the ideological principles that, until recently, defined Republicanism. The other, if current odds are to believed, is heading towards a presidential nominating convention that will either crown a self-described socialist (who is not an actual member of the party) or descend into total chaos.

At this moment, national polls suggest that the most viable alternative to Sen. Bernie Sanders' (I-Vt.) promised revolution is the insurgent candidacy of another outsider: former New York City Mayor Michael Bloomberg, who may accurately be called a DINO—that's "Democrat-in-name-only," to repurpose a tea party era slur from the other side of the aisle.

Bloomberg is a billionaire—you know, the class of people whom Democrats have spent the last several years demagoguing against—with a history of supporting racist police tactics, donating to Republicans, and being downright Trumpian in his disregard for the rule of law, as New York Times columnist Ross Douthat highlighted last week.

Or we could have the socialist who says having choices is overrated.

So, yes, it is easy to throw one's hands up and laugh at this selection of candidates. It is easier still to laugh at the failures of the supposed mainstream candidates who were supposed to stop them—the Marco Rubios, Ted Cruzes, Joe Bidens, and Elizabeth Warrens of the political world, all of whom spent years working their way through their respective party's system only to be bigfooted out of the way by a populist authoritarian of one variety or another.

If you're a libertarian, independent, or anyone else who operates outside and around the two major parties, this might seem like good news; like the two-party system is finally losing its grip on American politics.

But don't mistake the collapse of America's two preeminent political parties for the collapse of the two-party system itself. The latter is certainly welcome. But the former could easily lead us into a nightmare scenario where populism rules both parties and alternatives remain effectively sidelined by structural barriers erected during a previous era.

To understand why, it helps to first understand what's happened to the Republican and Democratic parties in the past few years. As political scientists from Yale, Marquette, and elsewhere have been noting for a while, both major parties are relatively weak right now—that is, the party structures have less influence over their presidential nominating processes than they historically have.

There are many examples of how political parties have become more small-d democratic in recent decades, but perhaps the most relevant is the way that the large-d Democratic Party changed its rules after 2016. This year, Democratic Party insiders who play a role at the party's convention (colloquially referred to as "superdelegates") will not be allowed to vote on the first ballot in Milwaukee.

In other words, having just watched a political outsider hijack the Republican Party, and having narrowly escaped Sanders' surprise insurrection against Hillary Clinton—which was prevented, in part, by the influence of the superdelegates—the Democratic Party decided that the right thing to do was….make it easier for an outsider candidate to smash his way into the party.

Not being a partisan, I don't have much interest whether the internal apparatus of the Republican Party or Democratic Party is strong or weak. As Reason editor at large Nick Gillespie has approvingly noted, Trump and Sanders are burning the traditional Republican and Democratic establishments to the ground. Good riddance to them.

But what I'd hope to see from the hollowing out of the two major parties is the creation of an environment where a greater set of political ideas can flourish. That, so far at least, has not happened.

Even though both parties are weakening internally, they remain externally strong. Thanks to decades of self-serving rulemaking, the two major parties will continue to have a stranglehold on power long after they've been hollowed out by the populists.

Just look at what happened when populism in the form of Trumpism invaded the GOP. The result has been a more bizarre form of political conformity, in which allegiance to Trump's views and defense of his personal interests come before all else. Principled Republicans have mostly been forced out of the party or sidelined to a significant degree.

There's no reason to think the outcome of a populist takeover of the Democratic Party would be much different. And that, I suspect, is part of the reason why longtime establishment figures on the left, like James Carville, are freaking out about the prospect of a Sanders nomination.

Upending the two-party system has not created fertile ground for a greater range of political viewpoints to compete in elections. Instead of destroying the political gatekeepers, we've merely handed the keys to the populists.

There's been no groundswell of support for, say, reforming ballot access laws to let third parties have a more fair shot. The practical and structural barriers to the creation of new and different political parties remain roughly as sturdy as ever, and the media continues to cover politics as a two-way, zero-sum game, which only reinforces the idea that the only factions who matter are the ones currently controlling Team Red or Team Blue.

Indeed, if the two-party system itself was collapsing, Bloomberg would have entered the race as an independent. He's flirted with that idea for years. But when he finally decided to toss his hat into the ring, it made more sense—even for the 9th richest man in the world—to try to hijack the name, branding, and built-in advantages of one of the existing major parties.

When it comes to policymaking, the populist takeover doesn't seem to be accomplishing much good. Trump's version of the Republican Party has jettisoned whatever fiscal conservativism it might have possessed and has become increasingly hostile to the free movement of goods and people around the world. A Democratic Party with Sanders at the helm would try to run deficits to even higher highs and might be even more hostile to trade.

And no populist administration is going to tackle the entitlement programs that are the biggest driver of America's long-term budget issues, because doing so would be quite unpopular.

Instead of a broadening of political perspectives, we're already running full speed into a 2020 election cycle that will recycle the same tired arguments that force voters into a binary choice—"if you don't vote for Trump, you're helping elect Sanders!" The only difference is that both choices might be populist authoritarians this time around.

In short, whether Trump or Bloomberg have an "R" or a "D" next to their names hardly matters—all that matters, it seems, is that they have one of those letters.