Bill Barr Knew He Would Be a Hatchet Man for Trump

Barr's big complaint is that the president is so overt with the sleazy pressure. 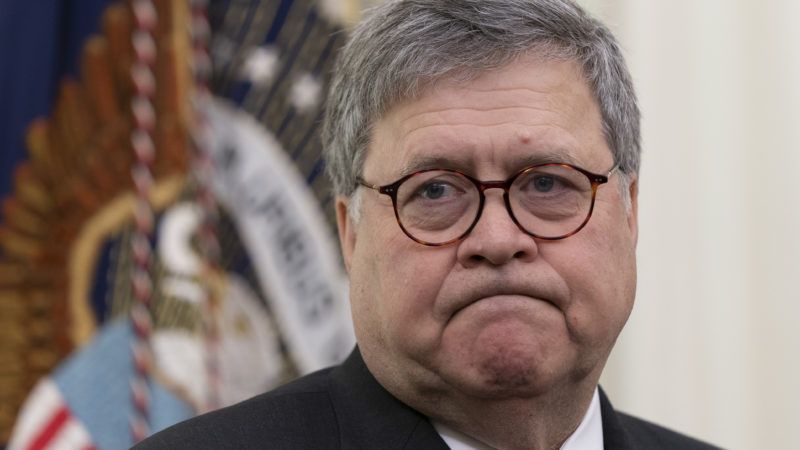 Let's take a moment to spare some pity for Bill Barr. Being the U.S. Attorney General can be a tough gig. It's a job held at the pleasure of the president, though also attached to a largely unrealistic expectation that the officeholder will act independently. Historically, it's been a hatchet-man position, doing dirty work through the institutions of the ever-expanding Justice Department on behalf of White House paranoia and prejudices. It's gotta be hard enough to maintain your self-respect in a position like that without your boss sending you instructions in front of the world via social media.

Only spare a little pity, though. Barr—a loyalist to the president, as anybody in that powerful cabinet position must be—stepped into this situation with his eyes open.

Now, however, Barr complains that President Donald Trump's off-the-cuff pronouncements and tweets "make it impossible for me to do my job." He told ABC News last week that "it's time [for Trump] to stop the tweeting about Department of Justice criminal cases."

Barr's latest complaint comes after the department went against federal prosecutors' recommendation of a stiff 87 to 108 months in prison for Trump friend and adviser Roger Stone, who was convicted for obstructing a congressional investigation, lying to a congressional committee, and witness tampering.

In and of itself, the sentencing reduction was perfectly justifiable. "A prison sentence of seven to nine years is disproportionate given the nature and consequences of Stone's crimes," as Reason's Jacob Sullum noted. "I can see why people thought this was an excessive sentence," chimed in CNN legal analyst Jeffrey Toobin.

Yet Trump's very public bitching and moaning about the original recommendation complicates the plot.

"This is a horrible and very unfair situation," the president tweeted, in what looks like a campaign of overt arm-twisting on behalf of a crony. "The real crimes were on the other side, as nothing happens to them. Cannot allow this miscarriage of justice!"

For the record, Barr said that President Trump "has never asked me to do anything in a criminal case."

"This doesn't mean that I do not have, as President, the legal right to do so, I do, but I have so far chosen not to!" the president responded, in what looks like an effort to further bend his beleaguered top cop over a barrel.

Presidents have frequently deployed their attorneys general for sleazy effect; Trump just does it more publicly.

Thomas Watt Gregory, President Woodrow Wilson's first attorney general, oversaw oppressive attempts to suppress anti-war sentiment and political dissent. He approved the creation of the pro-Wilson American Protective League to spy on and brutalize Americans who disagreed with the Wilson administration. To make sure there was no doubt about who was behind the snooping and beating, Gregory authorized the group to advertise itself as "Organized with the Approval and Operating under the Direction of the United States Department of Justice, Bureau of Investigation."

Homer Cummings, Franklin Delano Roosevelt's first attorney general, authored a court-packing plan that would have allowed the president to stuff the Supreme Court with allies who would approve his blatantly unconstitutional economic legislation.

John Mitchell, who served as attorney general under President Richard Nixon, went to prison for his role in the burglary of the Democratic Party's national headquarters at the Watergate Hotel—but not before he had his own wife kidnapped and drugged to keep the secret. That might have been a bit much even for some of the other creatures who aspire to high office; Mitchell's successors, Richard G. Kleindienst and Elliot Richardson, resigned rather than obey the increasingly erratic Nixon's orders.

Barr finds his job rendered "impossible" by Trump's tweets and has (so we're told) been complaining about them for "weeks." But just what did he think was going to happen when he took a hatchet-man job working for a guy who is completely incapable of handing off the hatchet without first publicly brandishing it and threatening to use it against passersby?

Barr can't claim he was unaware of what to expect from the job—this is his second shot as America's top prosecutor, after serving as attorney general under President George H. W. Bush from 1991-1993. Before that, he put in years as an assistant attorney general, as a legal policy adviser for the Reagan White House and, while attending grad school and law school, at the CIA.

In 1992, Barr was accused of helping to conceal evidence of illegal arms sales to Iran. "Coverup-General" was columnist William Safire's nickname for Barr as a result.

A babe in the government woods Barr is not.

Ironically, in light of the current controversy, one highlight of Barr's first stint as attorney general was the release of a report calling for building and filling more prisons. The report argued that "we are incarcerating too few criminals, and the public is suffering as a result." (Stone must be grateful that Barr apparently mellowed with time.)

Barr not only knew the ins and outs of the attorney general job, he knew what to expect of his boss. Long before Trump brought him onto the team, Barr defended the president's conduct in office, including a high-profile endorsement of the firing of Sally Yates and similar support given to the president's loud calls for investigating his defeated 2016 opponent, Hillary Clinton.

"There is nothing inherently wrong about a president calling for an investigation," Barr said in 2017.

Barr took the job knowing that, like his predecessors, he would be a hatchet man. Apparently, his big complaint is that he'd like the unfortunate nature of his role to be a little less overt.