Even Without Trump's Tweets, the Attorney General's Intervention on Roger Stone's Behalf Would Have Looked Bad

If Barr is so concerned about the appearance of integrity, why did he insert himself into a high-profile case involving a presidential pal? 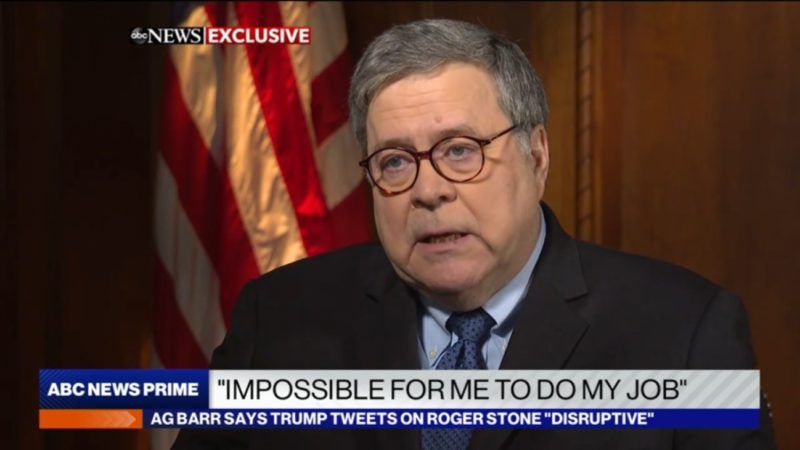 Is Attorney General William Barr defending the independence and integrity of the Justice Department, or is he just trying to quell the controversy over Roger Stone's sentencing and reassure prosecutors who are anxious about political interference with their work? Is he annoyed by the president's tweets about the case because they "make it impossible for me to do my job," as he told ABC News yesterday, or because they make it impossible to pretend that the decision to override the original sentencing recommendation was untainted by Donald Trump's personal interests?

Barr obviously wants the public to believe he is a straight shooter who does what he thinks is right in criminal cases without regard to the president's preferences, and I suspect that is how he views himself. He does not want to go down in history as a political hack who did the White House's bidding instead of doing his duty, who let the Justice Department become a vehicle for helping Trump's friends and hurting his enemies. Barr's interest in protecting his own reputation may be the department's strongest shield against a president who seems genuinely puzzled by the idea that he should not use his power over the executive branch to dictate prosecutorial decisions.

Yet Barr chose to intervene in Stone's case, a decision that would have hurt his reputation even if Trump had kept his mouth shut. According to Barr's account in the ABC interview, Timothy Shea, a former Barr adviser whom he named the interim U.S. attorney for the District of Columbia on January 30, "came by to briefly chat with me" about the Stone case on Monday. Shea told Barr the prosecutors assigned to the case "very much wanted" to recommend a seven-to-nine-year sentence, "but he thought that there was a way of satisfying everybody and providing more flexibility." After that "brief discussion," Barr said, "I was under the impression that what was going to happen was very much what I had suggested, which is deferring to the judge and then pointing at various factors and circumstances."

When Barr learned from news reports on Monday night that the prosecutors had filed a memorandum recommending the sentence they had originally favored, he said, "I was very surprised. Once I confirmed that that's actually what we filed, I said that night to my staff that we had to get ready, because we had to do something in the morning to amend that and clarify what our position was."

This is a horrible and very unfair situation. The real crimes were on the other side, as nothing happens to them. Cannot allow this miscarriage of justice! https://t.co/rHPfYX6Vbv

"I had made a decision that I thought was fair and reasonable in this particular case," Barr said, "and once the tweet occurred, the question is, 'Well, now what do I do?' Do you go forward with what you think is the right decision, or do you pull back because of the tweet? And that just sort of illustrates how disruptive these tweets can be."

Barr insists he never discussed the Stone case with the president or anyone else at the White House. But even assuming that's true, the case of a longtime Trump crony who was convicted of trying to protect the president by lying to a congressional committee and tampering with a witness was obviously of strong personal interest to Barr's boss. In case there was any doubt about that, Trump already had publicly commented on the case, complaining in November and again in January that Stone was being prosecuted for lying while various Trump foes had gotten away scot-free after committing what he viewed as similar offenses. He also had praised Stone as "tough, loyal guy" and commended him for saying, "I will never testify against Trump."

Given all that, why was Shea conferring with Barr about Stone's sentence to begin with? While Barr initially made it sound as if that conversation was a mere "chat" in which he "suggested" what prosecutors might do, he made it clear later in the interview that he viewed the sentencing recommendation as a decision he was called upon to make. Apparently he did not communicate his decision clearly enough, because Shea let his prosecutors follow their initial inclination. And by Barr's account, he knew he could not let that stand even before the president's tweet.

"I have a problem with some of the tweets," Barr said. "I'm happy to say that in fact, the president has never asked me to do anything in a criminal case. However, to have public statements and tweets made about the department, about people in the department, our men and women here, about cases pending in the department, and about judges before whom we have cases, make[s] it impossible for me to do my job and to assure the courts and the prosecutors in the department that we're doing our work with integrity."

If Barr is so concerned about the appearance of integrity, why did he insert himself into a high-profile case involving a presidential pal, urging lenience for a man whose loyalty Trump had publicly praised and whose prosecution he had publicly criticized? As I wrote the other day, there were sound reasons to believe a prison sentence of seven or more years would be disproportionate given the nature and consequences of Stone's crimes. But federal judges sentence around 70,000 defendants every year, and many of those cases involve injustices as bad or worse. Why did Roger Stone merit the attorney general's help when thousands of nonviolent offenders who are not the president's friends are routinely receiving "very unfair" sentences (even according to Trump), many of which could be mitigated by prosecutorial restraint?

"I will make those decisions based on what I think is the right thing to do, and I'm not going to be bullied or influenced by anybody," Barr said, "whether it's Congress, newspaper editorial boards, or the president. I'm going to do what I think is right."

Barr acknowledged that Trump's tweets might leave a different impression. "I cannot do my job here at the department with a constant background commentary that undercuts me," he said. "The fact that the tweets are out there and correspond to things we're doing at the department sort of give grist to the mill, and that's why I think it's time to stop the tweeting about Department of Justice criminal cases."

But even if Trump had not said anything about the case this week, it would be reasonable to question the wisdom and propriety of Barr's decision to intervene on Stone's behalf. An attorney general's self-restraint is especially important when he serves a president who seems incapable of it.