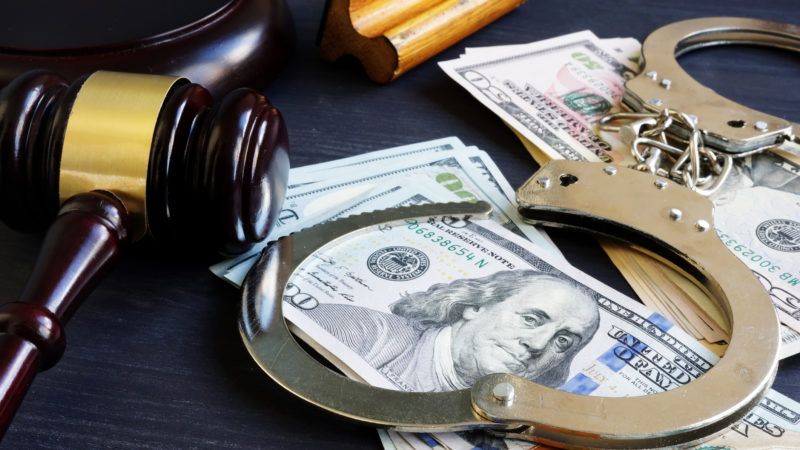 Criminal courts in Nashville are demanding that some defendants treat bail funds as down payments for any potential court fines and fees. Today, several civil rights groups filed a lawsuit to stop the practice, arguing it's unconstitutional.

The American Civil Liberties Union, the Civil Rights Corps, and Nashville-based Choosing Justice Initiative are suing the criminal court of Davidson County, Tennessee, in federal court. They filed suit on behalf of a community bail fund and they are asking the court to rule that these garnishment demands are violations of the Eighth Amendment's prohibition on excessive fines and fees, as well as the 14th Amendment's right to due process.

When arrestees in Davidson County are offered bail to avoid pretrial imprisonment, they can go through a bail bond company or they can put the money up themselves. Those defendants who attempt to cover their own bail (including those who seek help from family members) face an additional requirement: A bail bond rule requires defendants to agree that the money they give the county to cover the bail can be garnished to pay for any fines and fees the defendant may owe the court if convicted.

The purpose of cash bail is, ostensibly, to make sure that defendants show up for court dates and don't cause trouble or commit offenses while awaiting trial. If defendants do as ordered, their money is supposed to be returned to them. But in Davidson County's system, if the defendant is convicted, the court can take their bail money as payment for any fines or fees the defendant owes.

This garnishment practice means that family members or friends who offer their financial assistance to help a defendant make bail risk losing that money to the court if their friend is convicted, despite the fact that bail is supposed to be returned when the defendant shows up to court. While it is difficult to say what kind of chilling effect this practice has had on defendants looking for bail help from friends and family, Andrea Woods, an ACLU staff attorney with its Criminal Law Reform Project, tells Reason that roughly half of the people who were arrested in Davidson County in 2019 and given bail orders were unable to raise the funds they needed.

In late 2019, the rule became a problem for the Nashville Community Bail Fund (NCBF), a non-profit group that helps low-income defendants post bail. The Fund had been treated by the courts as exempt from the garnishment rule. People would donate to the fund, the fund put up money for bail, and then the fund got its money back when defendants met their pretrial release obligations. This system has enabled the NCBF to help about 1,000 people in the Nashville area get out of jail since 2016. (And lest anybody thinks that they're helping "criminals" get out of jail to cause more crimes—the narrative opponents of bail reform are using in New York—the NCBF notes that in 53 percent of the cases they assist, the result is no conviction.)

The NCBF operated with this exemption for three years. But in May, the judges with Davidson County's criminal court decided to rescind NCBF's exemption, claiming a concern that the bail fund had a significant amount of "conditional forfeiture" potential, essentially meaning that the fund was covering a lot of people's bail and that money could potentially be lost if defendants don't show up for court. What this has to do with garnishment is unclear, and the lawsuit notes that the judges didn't explain how revoking the exemption would actually make it more likely that defendants would show up for court.

"This practice is not rationally connected to the purpose of bail," Woods tells Reason. "It doesn't promote court appearances, and instead it's harming hundreds of people in Nashville. It's really baffling."

The most logical explanation is that the loss of the exemption means that the NCBF won't be able to help as many people, and therefore more people will likely remain in jail. The lawsuit notes that the fund has had to institute a monthly cap of $20,000 in bail assistance. Before the exemption was revoked, the organization reports spending an average of $67,000 each month in bail assistance. While it's not clear why the court revoked NCBF's exemption, it's clearly resulting in the organization helping fewer people make bail.

Nashville is not the only place where courts use bail payments to cover future fees if the defendant is convicted, so there may be other lawsuits like this one down the line. The effort to significantly reduce or eliminate cash bail demands altogether is getting much more media attention. But Woods notes that similar demands happen in Florida, Wisconsin, and Alabama, elsewhere in Tennessee, and in parts of Michigan.

Statistics show that people who aren't able to get bailed out of jail often end up facing harsher sentences and accept worse plea deals than those who are free to fight their case outside the confines of a jail cell. Davie Tucker Jr., the vice chairperson of NCBF's board, notes in a prepared statement that these garnishment rules are just another way to keep people behind bars even though they haven't been convicted.

"Without our intervention, those who cannot afford bail are forced to sit in cages, losing jobs, housing, and being separated from their families until their case concludes," Tucker said. "In the end many individuals plead guilty just to get out of jail."

The lawsuit, Nashville Community Bail Fund v. Gentry, was filed in the U.S. District Court for the Middle District of Tennessee. The lawsuit is asking the court to rule that these garnishment demands violate the Eighth and 14th Amendments, and they are seeking an injunction that would stop Davidson County from enforcing this policy.