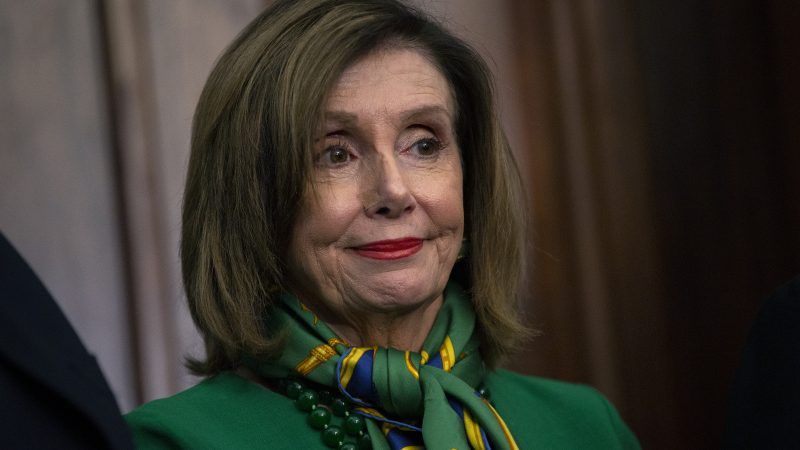 The House of Representatives voted 228-193 on Wednesday to formally send articles of impeachment to the Senate, signaling the start of President Donald Trump's trial. While the tally fell mostly along party lines, Rep. Collin Peterson (D–Minn.) voted against the articles' advancement and Rep. Justin Amash (I–Mich.) voted in favor.

The move capped off a contentious back-and-forth between House Speaker Nancy Pelosi (D–Calif.) and Senate Majority Leader Mitch McConnell (R–Ky.), after the former initially said she would withhold the articles for an unspecified period of time. Pelosi told ABC's This Week With George Stephanopoulos that she primarily did so to make the public case for witnesses after McConnell intimated that he would resist allowing any during the trial. The Kentucky senator, who has emphasized his desire for speedy proceedings, has since said that he will follow the impeachment model used during the Clinton administration, where senators vote on a resolution to start the trial and later vote on whether or not to allow witnesses.

Pelosi has come under fire for charging ahead with impeachment without waiting to hear from many in Trump's close circle, such as Secretary of State Mike Pompeo, acting Chief of Staff Mick Mulvaney, and former National Security Adviser John Bolton, whom the White House had instructed not to testify. Bolton recently announced that, if subpoenaed, he would comply.

Trump was impeached by the House in December amid accusations that he improperly leveraged his position to pressure Ukraine into publicly announcing investigations into his political foes. He is the third president in U.S. history to face a Senate trial.

Wednesday's House vote coincided with the Tuesday release of records that provide additional fodder for the notion that Rudy Giuliani, Trump's personal lawyer, and his associate, Lev Parnas, were working to ensure that Ukrainian President Volodymyr Zelenskiy announced those probes. The tranche of documents includes a handwritten note from Parnas that says, "get Zalensky to Annouce that the Biden case will Be Investigated." It further contains a correspondence between Parnas and Robert F. Hyde, a Republican congressional candidate in Connecticut, where Hyde implies that he is surveilling Marie Yovanovitch, the former ambassador to Ukraine who was ousted by Giuliani.

After informing Parnas that Yovanovich's computer was off, Hyde said he could solicit help in tracking her whereabouts. "They are moving her tomorrow. The guys over [there] asked me what I would like to do and what is in it for them," Hyde said via WhatsApp. "They are willing to help if we/you would like a price. Guess you can do anything in the Ukraine with money."

Additionally, a letter from Giuliani to Zelenskiy requests a meeting between the two. In the letter, Giuliani tells the Ukrainian leader that the president has "knowledge and consent" of his efforts. Democrats are likely to emphasize the latter, as Republicans have argued that Trump may have been unaware or not directly involved in Giuliani's actions.