After Contentious Debate, House Judiciary Votes To Advance Articles of Impeachment Against Trump

The motion passed along party lines. 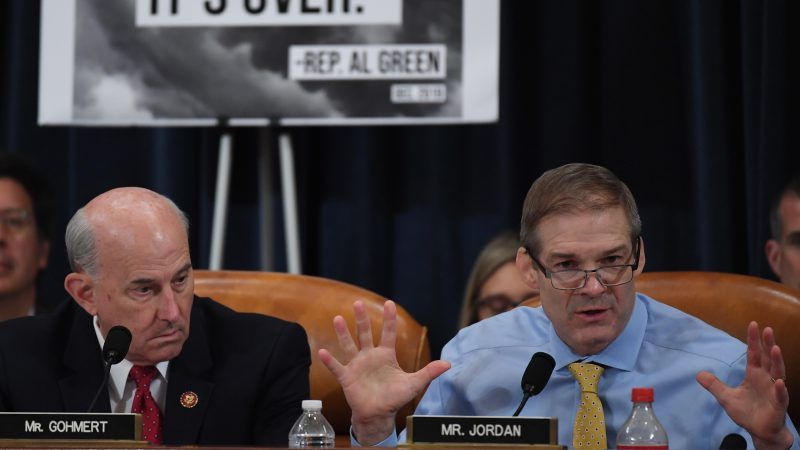 Members of the House Judiciary Committee voted Friday morning to advance articles of impeachment against President Donald Trump for abuse of power and obstruction of Congress.

The move came after hours of debate on Wednesday and Thursday as the committee sparred over the merits of the articles, with Republicans introducing a series of amendments, all of which were denied along party lines. Trump is hurtling toward impeachment amid allegations that he withheld a White House meeting and $391 million in congressionally authorized military aid from Ukraine in exchange for President Volodymyr Zelenskiy announcing public probes into his political rivals. Specifically, Trump wanted Zelenskiy to investigate Burisma Holdings, the energy company where former Vice President Joe Biden's son, Hunter, sat on the board, and look into a highly criticized theory that Ukraine executed a major 2016 election interference scheme to help Democrats.

Rep. Jim Jordan (R–Ohio) sought to strike the first article entirely. "Article one in this resolution ignores the truth, ignores the facts, ignores what happened and what has been laid out for the American people over the last three weeks," he said. There was no quid pro quo, Jordan maintained, although Gordon Sondland, the U.S. ambassador to the European Union, testified that there was a well-understood exchange in place with respect to the desired White House meeting. Jordan also continued to drive home that the investigations in question never took place, a point that the minority party repeatedly made during the initial hearings.

"I think the tougher challenge is the question of what explains why the money eventually got delivered," Keith Whittington, a political scientist at Princeton, told me last month. "We may not want to give them a lot of credit for eventually coming to their senses and trying to release the funds, especially if we think that why they're doing it was because they got caught."

Jordan also urged the committee to erase language that says Trump should be removed from office, which Chairman Rep. Jerry Nadler (D–New York) said was a "silly" suggestion.

Reps. Matt Gaetz (R–Fla.) and Andy Biggs (R–Ariz.) each introduced an amendment as well. The former requested that "Burisma and Hunter Biden" supplant the mention of Joe Biden, which he called "the true topic" of the desired probe. (A White House rough transcript of the July 25 phone call between Trump and Zelenskiy shows the president mentioning both men.)

Gaetz invoked the younger Biden's history of drug abuse as he sought to characterize his business relationship with Burisma as rife with corruption. "I don't want to make light of anybody's substance abuse issues, I know the president is working real hard to solve those throughout the country," he said, "but it's a little hard to believe that Burisma hired Hunter Biden to resolve their international disputes when he could not resolve his own dispute with Hertz rental car over leaving cocaine and a crack pipe in the car." In response, Rep. Hank Johnson (D–Ga.) reminded Gaetz of his 2008 arrest on drunk driving charges.

Biggs asked that language be inserted to add that the aid block was "consistent with administration policy to ensure foreign aid is not used for corrupt purposes," although Ukraine had already met all of the necessary anti-corruption benchmarks to receive the aid before it was withheld. The articles of impeachment currently state that Trump released the security assistance package when "faced with the public revelation of his actions," referring to the whistleblower report and the press attention that followed.

The articles will soon head to the House floor for a full vote, likely to take place next week.