Did Burger King Tell a Whopper About Its Meatless Burger?

No, but that's not stopping a litigious vegan from making his case. 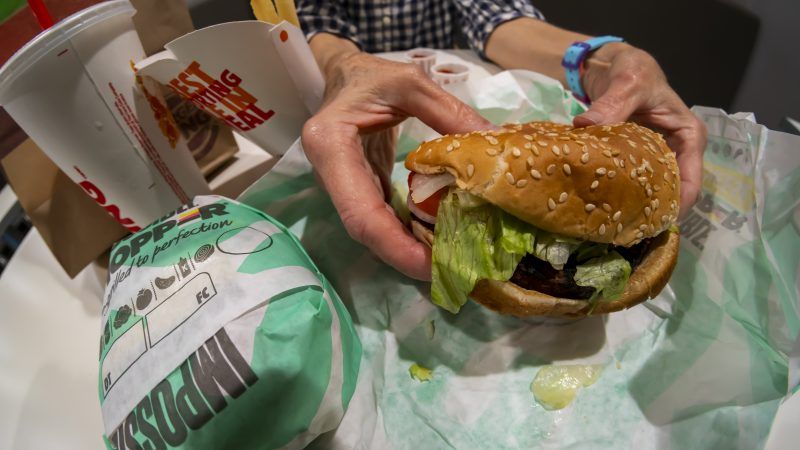 The fast-food chain Burger King was sued last month by a man who claims the company's plant-based burgers are "contaminated" with meat.

In the putative class-action lawsuit, Williams claims BK "duped" him and (presumably) other vegan and vegetarian customers. Williams seeks redress under Florida's Deceptive and Unfair Trade Practices Act and other laws. He's asked the court to award damages and attorneys fees and to compel BK "to plainly disclose that the Impossible Whopper is cooked on the same grill as its other meat." Burger King has not commented on the lawsuit.

Vegans, out of necessity, are attentive. And no vegan should be fooled by the Impossible Whopper, which, as the product description clearly states, contains mayonnaise. BK burger buns, a vegan website reports, also contain milk. What's more, as CNET noted last month—days before the BK lawsuit was filed—the Impossible Burger "may not be entirely friendly for vegans or vegetarians" due to the fact that "cross-contamination occurs between real meat and Impossible's faux meat."

"100% WHOPPER®, 0% Beef," states Burger King's description of its Impossible Whopper. The description also notes that "[f]or guests looking for a meat-free option, a non-broiler method of preparation is available upon request." In other words, customers such as Williams who want to eat something that is designed in a laboratory to look, smell, feel, and taste exactly like meat but who also want to avoid eating actual meat may choose to have their Impossible Whopper prepared in one of BK's microwaves.

Was Burger King trying to "dupe" anyone? I sincerely doubt it. For one thing, according to a Reuters report, the Impossible Whopper was designed "for meat eaters who want to consume less animal protein, not for vegans or vegetarians." That's not Williams, who claims in the suit "he does not eat or drink anything that uses animal by-products."

If Williams wants to eat only foods he believes contains no animal by-products, he should do so. But he also might wish to consider that Burger King is probably the last thing standing between him and a 100% vegan diet.

Consider, for example, the Food and Drug Administration's defect levels. They establish limits on—among other things—the maximum permissible amounts of animals and animal parts that may appear in various commercially available foods—including many putatively vegan or vegetarian foods. According to the regulations, allspice may contain dozens of insect fragments. Apple butter may contain rodent hairs. Asparagus may contain beetle eggs. Fruit juices may contain maggot and fly parts. Frozen broccoli may contain mites. Seeds may contain "mammalian excreta." And so on.

Opening up this line of inquiry further suggests something of a Pandora's box. Consider—as the classic Reese's Peanut Butter Cup commercial proves—so-called contamination of food goes both ways, and is often in the eye of the beholder. Somewhere down the road, aggrieved meat eaters might decide to sue a restaurant over contamination of their preferred meat products (e.g., hamburgers) by non-meat products (e.g., the Impossible Burger) they abhor.

For these and other reasons, I believe (and hope) this lawsuit against BK will fail. But others aren't so sure. Law professor Stephen Carter argues BK's "0% Beef" claim could help convince a court that Burger King was in the wrong because the statement is "a clear and precise assertion about the existence of a fact."

Interestingly, the lawsuit has generated some unlikely critics: many vegans and vegetarians. Hundreds of people, led by a self-described vegan, have signed on to a Change.org petition thanking Burger King for selling the Impossible Whopper. They and others are grateful for the choice and concerned the BK lawsuit could have unintended consequences.

"If this lawsuit leads to a ruling that forces Burger King to have separate, meat-free grills to cook plant-based burgers, that could be a problem," wrote the Motley Fool's Rich Duprey last week. "Adding [new] grills would be an expensive fix and Burger King would likely find it easier and cheaper to drop the Impossible Whopper from the menu."

If that's the end result, then this lawsuit will prove to be a huge loss for consumer choice in general and—more specifically—a huge setback for vegans and vegetarians who long to see more and better plant-based choices in America's most popular restaurants.