The drug wars will continue until the state gets its cut of the money. 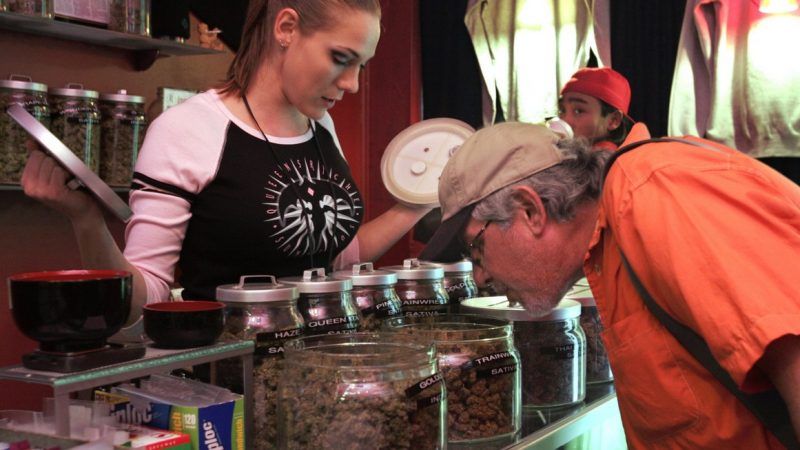 California's top pot cops have sent out hundreds of letters warning landlords that they face potential civil and criminal penalties if they allow unlicensed marijuana shops on their premises.

The Bureau of Cannabis Control, which oversees the state's legal marijuana industry, noted Tuesday that it's using the same laws the state has historically used against drug dens to punish landlords who allow retail marijuana dispensaries to operate without proper government approval.

Under California law, any landlord who knowingly leases space for the unlawful manufacturing, storing, or selling of a controlled substance faces up to a year in jail. And, of course, the government can then seize your property.

One might think that the legalization of marijuana retail sales and use would render such this state law—a remnant of the drug war—moot, but the Bureau of Cannabis Control wants to assure landlords otherwise. The Bureau's letter adds that anybody assisting in the operation of an illegal dispensary faces the same potential criminal penalties as if they had directly committed the offense. Furthermore, because the state actually does have legally regulated marijuana sales, violating the licensing laws now can lead to an additional set of punishments that didn't exist before. Anybody operating an illegal dispensary faces fines of up to $30,000 a day.

"This action is an important step in the state's effort to combat the illegal cannabis market. It is our hope that by detailing the penalties faced by landlords who rent their space to illegal operators, landlords will better understand the severe consequences that could come with knowingly facilitating illegal commercial cannabis activity and those currently breaking the law will have fewer options where they can conduct their businesses."

It's yet another reminder of the shambles California has made of legalized marijuana. Overregulation, high taxes, and a foot-dragging bureaucracy has made it cheaper and more reasonable for the black market to continue—this time in storefronts that don't have an official government stamp of approval. Reason has previously covered how the state's mismanagement and insistence on squeezing marijuana dispensaries for every cent they can get will guarantee that illegal marijuana sales will continue. One industry estimate puts the number of illegally operating pot shops in the state at nearly 3,000.

The Bureau of Cannabis Control offers a database where you can check to see if a pot dispensary is legally licensed by the state. Out of curiosity, I checked the names of two pot shops I pass by regularly between my home and Reason's Los Angeles office. Neither dispensary shows up on the list.

The state has nobody to blame for this situation but government itself. Turning to more harsh legal threats and using the exact same tools designed to shut down crack houses—prosecuting landlords and taking their properties—shows exactly how little the Golden State has learned from the drug war.