Malcolm Jenkins brought the data, but the Fraternal Order of Police prefer to bully him into shutting up. 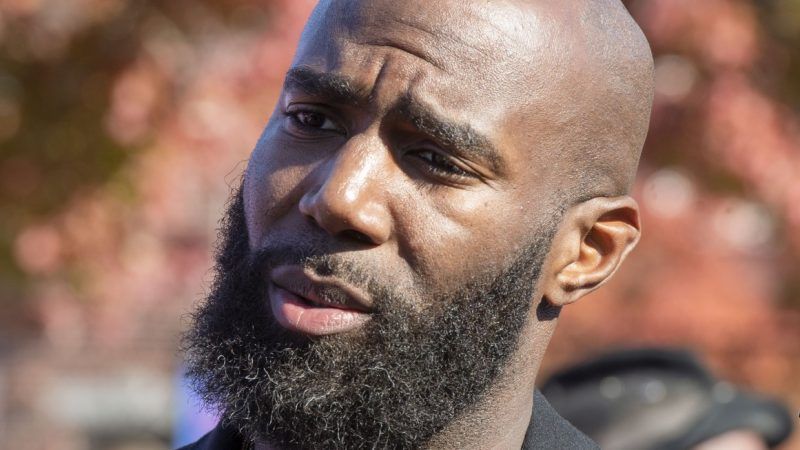 After Philadelphia Eagles safety Malcolm Jenkins wrote an op-ed in the Philadelphia Inquirer calling for more police accountability and transparency, the local Philly police union responded by bluntly telling Jenkins to shut up.

Philadelphia is in the midst of a much-needed conversation about police reform. Mayor Jim Kenney was re-elected to another term in office earlier in the month and is now on the hunt for a new police commissioner after Richard Ross resigned in August amid reports of sexual harassment and racial discrimination within the police force.

The Philadelphia Police Department's mismanagement has led to hundreds of drug cases being dropped due to a corrupt narcotics unit, the creation of an oft-abused asset forfeiture program, and thousands of stops of mostly black drivers by officers who claim to "smell" marijuana in order to justify warrantless stop-and-frisk searches. In 2016, Philadelphia voters elected Larry Krasner, a civil rights lawyer, as the city's district attorney for the purpose of checking and balancing that oppressive policing system.

Jenkins, meanwhile, is a co-founder of the Players Coalition Task Force, a non-profit organization formed by professional athletes to call for reform in policing and criminal justice. Jenkins submitted an op-ed to the Philadelphia Inquirer that ran on Monday, calling for Kenney to select a new police commissioner who will focus on fighting corruption within the department and reforming the practices of the police to focus on real crimes that affect the community. Jenkins came loaded with stats and facts:

The last commissioner resigned amid allegations of sexual harassment. Over 300 officers posted racist and sexist social media posts. Officers remain on the force despite using physical force against vulnerable people. And rather than solving serious crimes — police here make arrests in just 47% of all murder cases and 23% of all nonfatal shootings — they are busy stopping people over the "smell" of marijuana with over 3,300 drivers in the first quarter of 2019 alone, 84% of whom were black.

He notes that the Philadelphia police's use of stop-and-frisk searches find guns just one percent of the time. He calls for the police to stop arresting children in school, and for any new commissioner to implement a "zero tolerance" policy for police misconduct and to support a citizen review board.

Here's how the Philadelphia Fraternal Order of the Police, which represents 14,000 active and retired officers, responded in a letter signed by its president, John J. McNesby:

It's amazing, but not terribly surprising, that McNesby responded to Jenkins' critique not by challenging his data, but with a personal attack against him and the Inquirer for publishing his opinion. McNesby then has the gall to complain that "Hurling slurs and false allegations against police offers nothing in the way of improvement." Yet, there are no insults in Jenkins' piece, only data and specific recommendations that could reduce violent crime and improve community relations.

Let's suggest that this one particular paragraph is what is sticking in McNesby's craw. Jenkins wants a commissioner who is not afraid of McNesby's bluster:

A commissioner who fights back against the police union. Nearly every time we hear a story of an officer abusing power, whether through violence or racist Facebook postings, the police union is there to defend the bad behavior. We need a commissioner who isn't in lockstep with the union and who will instead push back when the union tries to hide and justify bad behavior. The commissioner must also support a union contract that allows for more officer accountability, even if that is an unpopular position with the rank and file.

Data shows that hundreds of Philadelphia cops fired for bad behavior have been able to fight their way back onto the police force, thanks to union contracts. Reason noted in 2017 how one police officer managed to get back on the force after being fired for killing an unarmed man by shooting him in the back.

The police union's overheated response here indicates how little value the Philadelphia Fraternal Order of Police places on developing or maintaining positive relationships with members of its own community. Second, it demonstrates how little regard Philadelphia's police union places in behaving like responsible, mature adults who will accept accountability for the power to arrest and use deadly force against citizens.

McNesby might be right about one thing, however. Given the Philadelphia Police Department's practice of planting drugs on suspects, costing the city millions in lawsuit settlements, perhaps the Inquirer should consider surveying drug dealers.