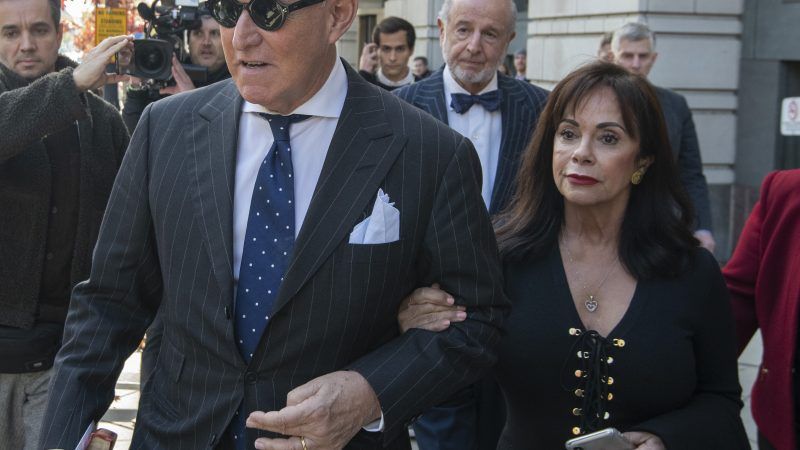 Roger Stone, the longtime associate and former campaign adviser of Donald Trump, was found guilty today by a federal jury of lying to Congress and other crimes.

The Justice Department indicted Stone in January on five counts of making false statements to Congress, one count of witness tampering, and one count of obstructing a congressional proceeding. The charges all stemmed from Special Counsel Robert Mueller's Russia investigation, and they related to Stone's communications with the Trump campaign about Democratic emails published by Wikileaks.

The indictment notes that during Stone's tenure as a Trump campaign adviser, he "was claiming both publicly and privately to have communicated with Organization 1," a.k.a. WikiLeaks. In August 2016, WikiLeaks denied direct communication with Stone. Stone then said his communication had been though a "mutual friend" and "go-between," and he "continued to communicate with members of the Trump Campaign" about what WikiLeaks might have from Hillary Clinton and the Democratic National Committee.

The indictment further alleges that Stone "made multiple false statements" to the U.S. House Permanent Committee on Intelligence about communications with WikiLeaks, and that he "falsely denied possessing records that contained evidence of these interactions."

Stone was found guilty today on all seven of the charges brought by the Justice Department.

President Donald Trump immediately took to Twitter to voice his disapproval. "So they now convict Roger Stone of lying and want to jail him for many years to come," Trump wrote. "Well, what about Crooked Hillary, Comey, Strzok, Page, McCabe, Brennan, Clapper, Shifty Schiff, Ohr & Nellie, Steele & all of the others, including even Mueller himself? Didn't they lie?"

According to CNN, federal prosecutors wanted Stone to be taken into custody immediately after the conclusion of the trial. But Judge Amy Berman Jackson of the U.S. District Court for the District of Columbia stated that she "will release him on his current conditions pending the sentencing date."

Stone now faces up to 50 years in prison.

"Roger Stone Indictment Describes a Cover-Up of a Non-Existent Crime," by Jacob Sullum