Pete Buttigieg Has a $1 Trillion Plan to Drive Up Housing, College, and Labor Costs

Dramatic increases in federal spending will not “unlock access” for the poor. It will only help those with the right connections. 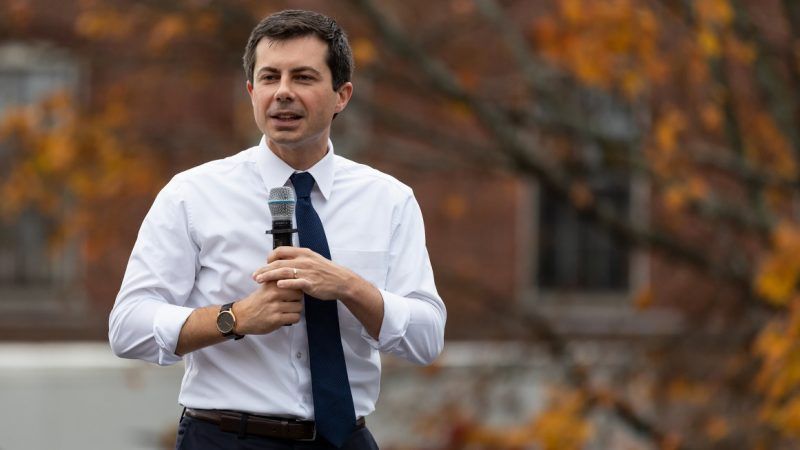 On Friday, Buttigieg revealed "An Economic Agenda for American Families: Empowering Working and Middle Class Americans to Thrive," his expensive proposal to push for even greater amounts of federal spending and regulation in housing, child care, college, and the workplace.

This is hardly a surprise from a Democratic candidate, even a self-styled moderate like Buttigieg. He says in the proposal's introduction that he "doesn't mean government taking over the economy." But he nevertheless argues that government is supposed to have a "vigorous presence" in our economy to make sure it "actually works for all."

And by "vigorous," we're talking about $1 trillion in new federal spending in housing and child care over a decade, not unlike Warren's own proposals. Buttigieg wants to spend $430 billion dollars in federal funds to "unlock access to affordable housing" for more than seven million families. He wants to do so by using various federal grant funds to send more money to local governments to fund housing programs.

While that's better than having the federal government directly decide what gets built, what he's really doing is increasing spending on existing programs and propagating the perpetual political obsession with homeownership as the ultimate goal of housing policy. And he's talking about sending more money to programs like the Community Development Block Grant (CDBG), a program that has been plagued by local officials directing money away from projects and programs to help the poor to those that help their friends, or even themselves. More CDBG grant funding gets spent on local government projects than on housing.

As always, government involvement in housing development turns it into a big gravy train that rewards those who are connected and have the ears of local officials. Often times, government-mandated affordable housing is anything but, thanks to the competing demands and interests of both government officials and those who lobby them for a piece of that funding. Consider, for example, prevailing wage regulations that affect both federal and sometimes local construction costs, setting an artificial floor on construction costs typically based on what local unionized workers make. Prevailing wage laws are an example of the government putting the thumb on the scales in favor of connected union officials. Since California mandates that low-income housing developers pay laborers the "prevailing wage," this inevitably jacks up the cost of such housing. The result: housing shortages.

Buttigieg's housing plan is not all horrible, at least on paper. He appears to be keenly aware that zoning laws contribute to housing shortages, particularly in big cities, and says that he wants to "work with states and cities to reform zoning laws to make it easier to build housing for working and middle-class families." That's a nice sentiment that unfortunately has little to do with the role of the president.

Buttigieg wants to spend a cool $700 billion in federal funds on pre-kindergarten and after-school programs, justifying it as a tool to allow parents to "participate as fully in the labor market as they choose." His campaign says he'll be going after the typical Democratic whipping boy—the capital gains tax rate—to try to raise the money for this spending.

For college costs, Buttigieg wants to spend another $500 billion to make public college tuition free for families who earn less than $100,000 a year. Buttigieg notes that college price tags have tripled in the past three decades but completely fails to note how much of it is a result of dramatic increases in administrative costs and non-faculty staffing. And the subsidies that the feds have been providing to colleges have a very clear connection to colleges raising tuition rates. Buttigieg's proposal flippantly deals with this clear economics 101 problem with a simple, "To keep tuition costs in check, in exchange for receiving federal dollars states will guarantee to invest in their public higher education systems and constrain tuition increases." That doesn't actually mean anything other than a vague suggestion that colleges will have to justify tuition increases through whatever boilerplate language they've been using all along.

And to be clear, there will be increases, and not just because of the federal subsidies here. A good chunk of Buttigieg's proposal also talks about raising incomes, expanding tax credits, passing a $15 minimum wage, giving every American 12 weeks of comprehensive paid family and medical leave, and increasing wages for teachers. He says he wants to double union membership across the United States and end "right-to-work" laws.

All of these labor promises, if they ever went into effect nationwide, would drive up the costs of everything that Buttigieg says he wants to make "more accessible" to more Americans. In California, for instance, government labor demands (and lawsuits against developers that resist) have driven up housing costs. When President Barack Obama proposed free community college to students back in 2015, the price tag of the cost jumped from $60 to $90 billion just during the process of drafting a bill. It also included a whole host of institutional reforms to "improve student outcomes," by which the Obama administration meant more spending on student support services outside the lecture hall. This fundamentally meant creating even more non-faculty college positions, thereby driving up, not down, the price of college.