Is Trump Choosing Tariffs Over a Trade Deal With China?

The tariffs were supposed to create the conditions for such a deal, but Trump is refusing to drop them as part of an agreement. 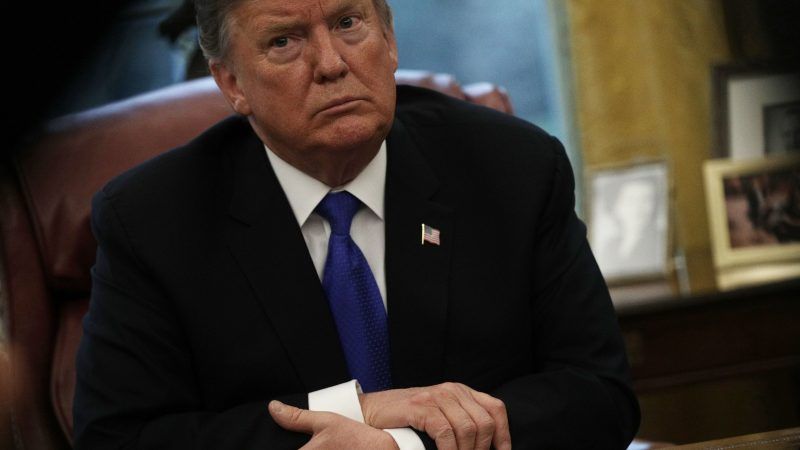 When someone says he is a "Tariff Man," you should probably believe him.

President Donald Trump says he is unwilling to roll back any of the tariffs his administration has placed on Chinese imports as part of a "phase one" trade deal. Although the framework of a deal has been announced by leaders in both countries—and despite the fact that plans to sign the deal are already being made—Trump's unwillingness to withdraw any tariffs appears to be a major stumbling block toward actually reaching an agreement.

Trump and his top trade advisor have been quick to shoot down speculation that the "phase one" deal could be the beginning of the end of the trade war. That speculation started on Thursday, when a spokesman for the Chinese Commerce Ministry said both countries had agreed to a reduction in tariffs. But Trump told reporters over the weekend that he had not agreed to any such reduction—a statement that effectively signals Trump's desire to control the outcome of the negotiations, regardless of what his own trade negotiators might be crafting.

Peter Navarro, Trump's top trade advisor and an avowed China hawk, slammed what he called "misleading" coverage of the tariff rollback agreement. In an email to multiple media outlets, Navarro said "the story began with a declaration by propagandists within the Chinese government" and that "there was no such agreement," Politico reported.

It is impossible to tell which side is playing the other—or whether both are merely staking out negotiating positions. But the whole incident strongly suggests that a deal to end the trade war is not imminent, and should lower expectations for what will actually be accomplished within the "phase one" agreement that's still being hammered out.

A quick check of the scoreboard: The United States has imposed tariffs on about $500 billion worth of Chinese imports since July 2018, with another round of tariffs scheduled to hit in mid-December. If those go ahead as planned, nearly all imports from China (minus a few specific carve-outs) will be subject to import taxes. China has retaliated with tariffs on about $110 billion of U.S. goods and by shifting their purchasing of agricultural goods towards other producers. Both sides are losing.

But if he's facing a choice between his beloved tariffs and a possible trade deal with China, it shouldn't be a surprise if Trump decides to stick with the tariffs.

He's been telegraphing as much since early this year, just weeks after an apparent December 2018 breakthrough in the trade war dissolved. During a January 31 interview with reporters from The New York Times, Trump was asked bluntly whether he would be willing to lift his tariffs on Chinese imports as part of a trade deal.

"Do you think it's possible that you might still go, even if you reach a deal on all of the points you're trying to reach, leave some of the tariffs on?" asked Peter Baker, the Times' White House correspondent. "Is that a possibility?"

"Yeah, sure," said Trump, after an extended rant about the World Trade Organization. "We have 25 percent now on $50 billion. And by the way, Peter, that's a lot of money pouring into our Treasury, you know. We never made 5 cents with China. We're getting right now 25 percent on $50 billion."

At the time, this seemed like just more evidence that Trump does not understand how tariffs work. The Treasury is not "getting" money from China—the $37 billion in tariff revenue collected since the trade war began have come out of the pockets of American importers, businesses, and consumers—though the tariffs are likely responsible for a slowdown in China's growth rate, and for disadvantaging the private businesses operating in the shadow of China's state-controlled economy.

But Trump was clear that, even with a deal that accomplished all of his goals (which remain unclear), he'd keep the tariffs in place.

More than 10 months later, he's sticking to that position. Another potential breakthrough in the trade war looks to be on shaky ground because Trump is unwilling to budge on his commitment to maintaining tariffs on Chinese imports—the removal of which are, understandably, a major priority for China.

And without an agreement to roll back tariffs, there will be no deal, tweeted Hu Xijin, editor of the Global Times, a Chinese newspaper widely seen as a mouthpiece for the country's government.

What President Trump said is not what the markets expect. But he said "the US hasn't agreed to a rollback of tariffs". It's not a flat denial. What's certain is that if there's no rollback of tariffs, there will be no phase 1deal. https://t.co/fJEKz9hEFi

Much of the trade war has been defined by Trump's misunderstanding of how tariffs work and who pays for them, crossed with his unwillingness to use any other tools to accomplish his trade policy goals.

That ignorance has imposed immense economic costs on American consumers and businesses while failing to reduce how much America imports from China and dragging down U.S. economic growth.

That stubbornness might preclude Trump from being able to reach an agreement that would start to undo the damage.