Hong Kong Protester Falls to His Death After Police Confrontation

The protester, Chow Tsz-lok, was only 22. 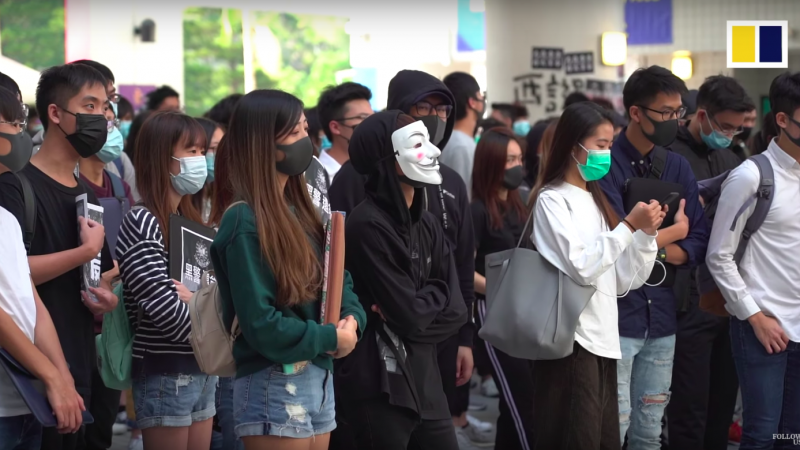 A 22-year-old Hong Kong protester fell from the third story of a parking garage Monday during a confrontation with the police. Today, after several days in a coma, he died as a result of his injuries.

#LIVE: It is now 8.09 pm, 12 hours since 22-year-old HKUST student Alex Chow was certified dead. With their eyes turning scarlet, many of the people who have gathered at the carpark starts to sob. The gloom has suffused the building. #HongKongProtests pic.twitter.com/eN2YudDSCF

The protester, Chow Tsz-lok, was a computer science student at the Hong Kong University of Science and Technology.

Reports of the circumstances surrounding the death contain many discrepancies. Some witnesses claim he fell trying to get away from tear gas, while others claim there was almost no tear gas in the garage. Hong Kong officials have made contradictory statements about whether police were in the parking garage at the time of the incident, and some protesters have claimed that first responders were blocked from getting to the scene. Other reports claim it took emergency vehicles 20 minutes to get to the site of the accident.

The New York Times reports that "video from i-Cable News, a Hong Kong broadcaster, showed the police firing rounds of tear gas up into an elevated parking garage from which protesters had thrown traffic cones down." No surveillance footage captured the circumstances of Chow's death.

Meanwhile, Suzette Foo, the Hong Kong Police Force's senior superintendent of the Kowloon East region, has changed the sequence of events she initially presented. According to the Times, she "acknowledged on Friday that officers had been in the parking garage where Mr. Chow was found nearly an hour earlier than previously admitted. But it remained unclear what if any interactions he had with officers."

The local outlet rthk.hk reports that police "also admitted that the timeline of events they had originally provided was wrong, and officers had first gone into the car park at Sheung Tak Estate to tackle protesters almost two hours earlier than they previously stated." The same source notes that protesters had been in the parking garage around 11 p.m. that night before leaving shortly after, and that officers were patrolling the area for dissident stragglers shortly before Chow was found dead.

Though Foo denied that the cops played any role in blocking emergency vehicles' paths, an anonymous first responder told the Times that police did in fact block an ambulance from reaching Chow. Leung Kwok-lai, assistant chief ambulance officer of the city's Fire Services Department, told the Times that the ambulance wait time was so long because vehicles were blocked by other cars not affiliated with the police.

Chow may be the first protester killed in a police confrontation, but he wasn't the first to face brutal police tactics. Several protesters have been shot with live rounds over the last 22 weeks, and many have been hospitalized due to injuries from police-deployed tear gas. One protester permanently lost her eye after a bean bag round hit her. Bloomberg reports that Hong Kong police have "fired nearly 6,000 [tear gas] rounds in total…in areas home to as much as 88% of Hong Kong's 7.4 million residents," sometimes in enclosed spaces or in residential areas where the tear gas can seep into homes.

Students at Chow's university held vigils for him today:

The Chinese name of the deceased student is being graffitied on to the wooden boards behind the stage. "Never forget, never forgive," another graffiti reads. pic.twitter.com/5meYMM9eLa

The Hong Kong protests started on June 9 after Hong Kong's Chief Executive Carrie Lam introduced an extradition treaty that would have allowed citizens of Hong Kong accused of crimes to be extradited to mainland China or to Taiwan. Though Hong Kong is technically part of China, it was granted semi-autonomous status in 1997 when Britain handed it over to China. The "one country, two systems" arrangement means Hongkongers are accustomed to basic democratic norms, including the ability to elect many of their representatives, the freedom to assemble, and the freedom to criticize the government in the press—freedoms Beijing does not ordinarily allow.

Hong Kong is scheduled to become fully part of China in 2047, but Lam's now-withdrawn extradition treaty instilled a sense of fear in many Hongkongers that they were being prematurely absorbed by mainland China and subjected to Beijing's illiberal one-party rule. What started as a protest over a specific bill has been turned into something much bigger: an attempt to preserve freedoms that Hongkongers hold dear and to stave off Beijing's ever-looming encroachment.