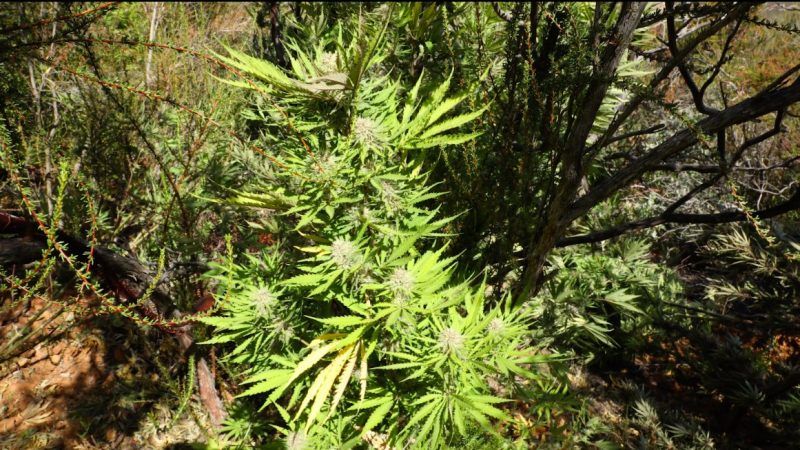 (Via the Campaign Against Marijuana Planting program)

Yesterday, California Attorney General Xavier Becerra made a big deal about a bunch of police raids and arrests over the past year. Were these violent thugs or scam artists engaging in hacking or theft?

No. They were people illegally growing marijuana in a state that legalized growing marijuana. California has botched its legalization so badly that the state's attorney general is putting out press releases to brag about how many people they're still arresting.

Becerra announced that through the Campaign Against Marijuana Planting (CAMP) program, the state's Department of Justice had raided 345 grow sites, arrested 148 people, and destroyed nearly 1 million marijuana plants that were being grown illegally, sometimes on public lands, across the state over the course of 2019.

"Illegal cannabis grows are devastating our communities. Criminals who disregard life, poison our waters, damage our public lands, and weaponize the illegal cannabis black market will be brought to justice," Becerra said in a prepared statement.

Becerra's release is heavy on talking about cooperation between federal, state, and local agencies to wipe out these illegal grow operations and about the potential environmental harms from massive pot farms out in the wild. Only a couple of the photos they've provided actually show any marijuana. Most show piles of trash, making it look as though they're raiding homeless encampments, not massive illegal grow operations.

Becerra's statement is silent about why a state that has legalized marijuana use—both medically and recreationally—still has such a massive black market. There's no mention about the massive state and local taxes that have driven up prices so much that a black market persists. There's no mention of how costly regulations and bureaucratic red tape have made it hard to legally grow marijuana for sale. And most importantly, just like all the old drug war announcements about drug site raids, there is no evidence that any of these arrests will actually succeed in shutting down the black market. Raids hadn't succeeded back when marijuana was illegal; why would these raids be any different?

The Golden State has done such a terrible job at actually legalizing marijuana that even 60 Minutes recently produced a segment on how the bureaucratic and regulatory systems California has put into place continue to foster black markets.

One small legal grower named Casey O'Neill noted he was $50,000 in the red trying to comply with all the regulations—"$2,500 a year for the water board discharge permit. It's $750 a year for the pond permit. It's $1,350 application fee to the county, plus another $675 when they actually give you the permit, annually." When asked about his profits, his response was blunt: "What profits?"

Black markets aren't caused solely by banning a good or service. They're also fostered when the government makes it so hard to legally operate that, unless you have the right government connections, the only way you'll realistically make money is by defying the law.

Becerra shows no sign that he has any understanding that these illegal operations are going to continue as long as regulations and taxes make it too burdensome to legally grow and sell weed. And so, just like every other law enforcement announcement from the past 30 years throwing out big numbers of arrests and drug confiscation, these numbers Becerra and CAMP are tossing out mean nothing. The black markets will continue.