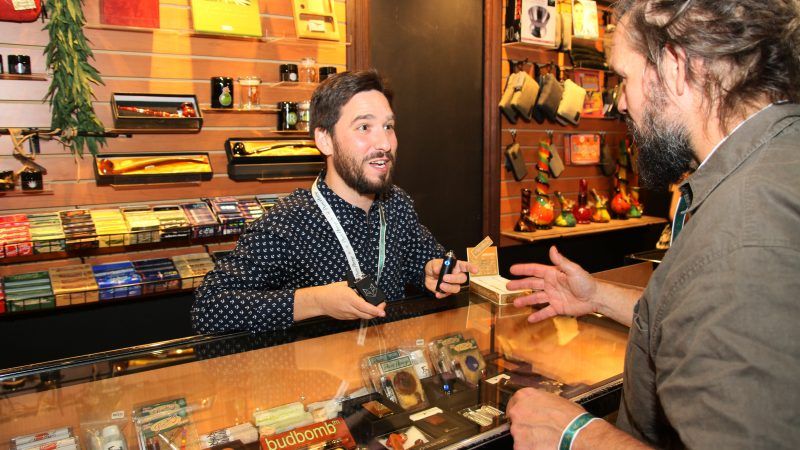 Marijuana legalization was supposed to give Canada's cannabis fanciers access to above board and reliable drug sources while providing tax revenue for the government. But one year in, large numbers of Canadian cannabis users continue to rely on underground dealers. Like with U.S. states that have grudgingly legalized marijuana for recreational use, the black market goes on thriving and generating profits because politicians and regulators have hobbled legal businesses and inconvenienced consumers through high taxes and excessive rules.

As a result, Canada's legal market is largely uncompetitive with the long-established black market there.

Canada has a federal system, like the United States, so you have a multi-layer regulatory system. First, you have federal officials who have managed to run up a backlog for license approvals for sales, for research, and for the issuance of regulations. Then, rules vary from province to province. Some are worse than others.

"I did $1.4 million in sales, which is the highest sales of any retailer in Newfoundland, as far as I know. And I'm just barely scraping by," one marijuana retailer told the CBC. By provincial law, he's limited to an 8 percent commission on his sales. Out of that, he must pay a dollar per gram excise tax, and then 2.5 percent to credit card companies. And he's limited in his offerings, since cannabis edibles aren't yet legal.

By contrast, the former (and possibly future, he says) black market dealer points out that "you can buy a pound of weed for up to $1,600 and sell it for $3,000 on the illegal market right now, and dealers deliver it to your door within a couple hours."

Across the continent, British Columbia also makes the legal market a huge hassle.

In Vancouver, despite the province's reputation as a cannabis haven, "licensing has been glacial," owing "to a change in power in the provincial government and cities being slow to approve zoning and other requirements," reports AP. "Regulatory hurdles have also made it tough for B.C.'s many small growers to be licensed; instead, production is dominated by large corporations churning out pot by the ton from massive greenhouses."

By contrast, Alberta, with a more relaxed approach, hosts more than half of Canada's 560 licensed marijuana stores.

"One year past the end of cannabis prohibition, Calgary already has more cannabis stores—66—than any other city in Canada, with Edmonton second at 48," notes the Calgary Herald. "Another 154 locations have been approved in Calgary."

That's a major contrast to Canada's most populous provinces given that "Ontario and Quebec, which together make up two-thirds of Canada's population, have only about 45 shops between them," says AP.

"Every level wants to regulate [in Canada]," Brett Wilson of Canoe Financial, an investment firm, told the CanTech Letter. "We have the province regulating the number of pot shops in the city, then the city will come in and say, 'Well, we don't want one too close to this school.' And so there's all sorts of regulatory bureaucracy."

So, marijuana-shopping in much of Canada—especially population centers—remains a difficult task if you stick to the legal market. But people don't have to do that. The black market was well-established and responsive long before Canada dipped its toes into legalization. Half-hearted legalization gives consumers good reason to stay loyal to their underground dealers, and dealers strong incentives to stay off the books.

According to Statistics Canada, 41.9 percent of marijuana users continue to patronize illicit vendors, compared to the 48.3 percent using legal sources (homegrown and "other" sources make up the gap). Importantly, illegal dealers appear to be keeping the heavier users, too, with the black market estimated at $5 billion to $7 billion, compared to the $1 billion for legal sales.

A big part of the problem seems to be that government officials assumed that most of their constituents really wanted to move into the legal market and were willing to suffer inconvenience and expense in order to do so. Instead, it's apparent that what people want are good products and responsive services at competitive prices, and many are not especially concerned as to whether or not vendors have government permission.

This should not be a surprise to anybody who has observed state-level legalization efforts in the U.S., where unenthusiastic legalizers managed to keep black markets healthy by burdening legal growers and dealers with rules and taxes.

Three years after legalization, California's illicit marijuana market continues to eclipse the legal one because of crippling restrictions. Towns have the power, which most have exercised, to ban retail pot shops. And fees add up and up.

It's "$2,500 a year for the water board discharge permit. It's $750 a year for the pond permit. It's $1,350 application fee to the county, plus another $675 when they actually give you the permit annually," one former illegal grower tallied for CBS News, explaining the more than $50,000 he spent trying to go straight.

Should he manage to get his product to market, California will tax it at up to 45 percent—a rate consumers can and do skip by staying with their black market dealers.

In Washington, despite evidence of a hobbled industry, officials stubbornly stand by their 37 percent tax and their ban on delivery. "The biggest challenge is that we are not a free market," grower Alex Cooley told Seattle Business. "We are a controlled market trying to act like a free market.

Colorado, by contrast, has been willing to cut marijuana taxes and consider regulatory changes, including relaxed rules. That's made the legal market more attractive for providers and consumers alike. (Black market exports to restrictive states continue to be big business, of course.)

That the same economic incentives and human reactions operate in Canada is entirely unsurprising. If you only nominally "legalize" a good or service, in a way that makes it uncompetitive with black market suppliers, lots of people will happily keep that underground market functioning.

So, thanks, Canadian officials, for the latest demonstration of the perverse effects of government meddling in markets. Now please, for everybody's sake, back off.