If Facebook Can Get Rid of Dick Pics, It Can Stop All Drug Deals Too, Claim Activists

Gutting Section 230 would make it harder to track drug deals, not easier. 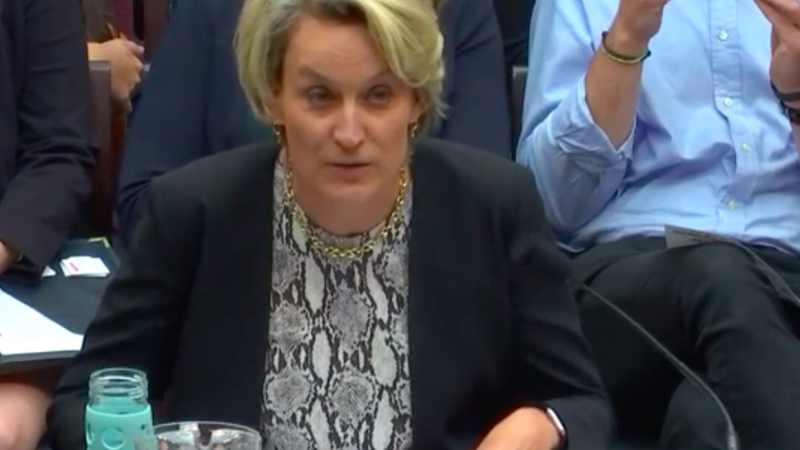 Peters was part of a panel sent to testify on Section 230, the piece of legislation that protects tech companies from facing liability for content posted by third-party users online. There has been a great deal of misinformation peddled about the law—namely that platforms are prohibited from moderating content they deem harmful. In reality, it encourages tech companies to remove posts "in good faith," so as to prevent the internet from devolving into a cesspool of negativity. Peters says they should be doing more.

But her testimony was laced with inaccuracies that reflect a fundamental misunderstanding about her goal, which is to punish online platforms and remove their legal protections should they fail to aggressively police illicit content.

There is an "incredible range and scale of illicit activity happening online," she mused. "It is far worse than I ever imagined."

Issuing an apocalyptic warning to the audience of members of Congress, Peters continued on to describe how social media giants are actively helping facilitate the "public health crisis" known as the opioid epidemic, which she said "is claiming more than 60,000 American lives each year." (That's incorrect: There were about 47,000 deadly overdoses in 2017, the latest year for which we have the data.) A stream of studies "by ACCO members and others" affirmatively show the "widespread use of Google, Twitter, Facebook, Reddit, [and] YouTube to market and sell fentanyl, oxycodone, and other highly addictive, often deadly substances to U.S. consumers," said Peters. "Every major internet platform has a drug problem."

Yet which studies she is referencing remains unclear, as does her definition of "widespread." The Center for Safe Internet Pharmacies (CSIP), which aims to curb illegal pharmaceutical sales online, estimates that less than 5 percent of all opioid purchases come from internet transactions. Interestingly, that same study surmises that the majority of such sales occur on the "dark web," as opposed to the legally operated platforms that have drawn Peters' ire.

"The voluntary efforts of internet and payment platforms such as Google, PayPal, and Bing, among other companies, to curb the online promotion of illicit products have disrupted these illicit businesses' operations," the report concludes, "specifically by removing the options of paid advertising and the most common payment methods."

CSIP also specifically mentions Reddit, whose CEO, Steve Huffman, testified that the website would cease to exist in its current form should Section 230 protections be removed. "Drug vendors also take advantage of anonymous chat forums to find customers, but the most popular of these, reddit.com, has recently seen more scrutiny and enforcement by platform operators," the report says.

Yet a vastly different impression was left with many members of Congress, several of whom said they found Peters' testimony "jarring" and "horrifying."

But never before has an industry been granted "total immunity no matter what their harm brings to consumers," Peters said, which sounds deeply alarming on its face. The implication is that platforms can facilitate heinous crimes in broad daylight without fear of any repercussions.

The problem is that Peters' claim is blatantly untrue.

Section 230 already contains a carve-out for federal criminal law, meaning that online platforms that are implicated in illegal behavior can be charged accordingly. Consider the Silk Road, a now-defunct dark website used to traffic illicit drugs. Its owner, Ross Ulbricht, is serving a double-life sentence plus 40 years. Not even Section 230 could save him from the harsh consequences of the drug war.

So what does Peters propose that Congress do? One can't be sure—she offered no practical insight, other than a veiled remark about the need for "revised language" in the legislation.

What course of action she would have these companies take isn't completely clear, either, although she provided some clues. Her dick pic example—which she gave in response to a question about concrete solutions—suggested that these websites have concocted the perfect crime-fighting algorithm. If they've figured out how to eliminate full-frontal nudity, so too should they be able to pinpoint and eradicate the drug market, she implies.

But this is preposterous when considering the intricate nature of black markets. It's easy to find and flag a post that reads, "CHEAP FENTANYL FOR SALE!"—just as a picture of a penis might stand out in one's newsfeed. Platforms are already working to erase that kind of content with relative success. Harder still is it to uncover covert illegal postings, many of which use secret Facebook groups and code words to fly under the radar. No advanced algorithm can perfectly pinpoint those. A 100 percent removal rate would likely require the manual review of every single item posted to those platforms—both an impossible undertaking, and something Section 230 was supposed to protect companies from having to do.

Even still, Peters would like to see platforms punished for failing to adequately stand up to organized crime. "If it's illegal in real life, it ought to be illegal to host it online," she repeated, meaning that tech firms would be criminally liable for failing to find each and every unlawful post.

And in reality, that effort would have the opposite of its intended effect: Worried about pending lawsuits or criminal charges, companies would be apt to remove any and all troublesome content, making it more difficult for law enforcement to track down those who break the rules.

Ironically, Peters seemed to recognize that shortfall when testifying. When tech companies remove illicit activity, she said that it destroys "critical evidence of a crime," and "[helps] criminals to cover their tracks." She should not expect that to get any better if her vague policy solution prevails.