Fast-Food Bans Are a Dumb Idea That Won't Die

Food nannies won't let failure stop them from banning everything they can. 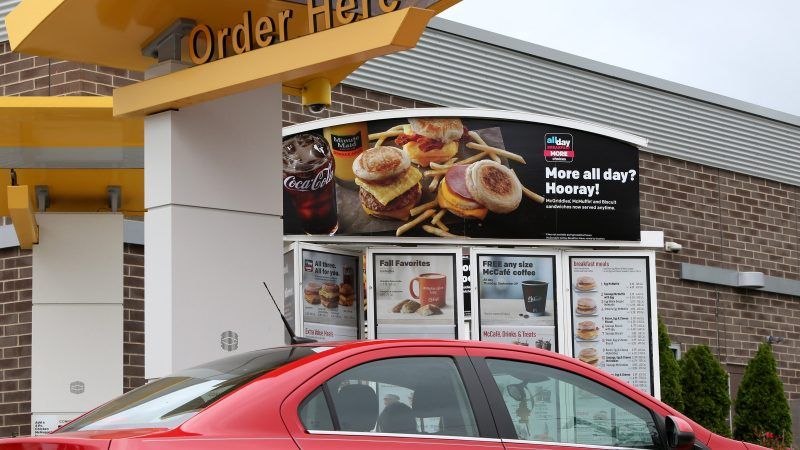 While some activists tout the bans as a cure-all for much of what ails society, there's a lack of evidence to support these bans. What's more, research and anecdotal evidence suggest the bans are actually counterproductive.

Cities in at least four states have adopted drive-thru bans, Today reports. In Minneapolis, which banned new fast-food drive-thru windows in August, Today says proponents claim "curbing access to even faster fast food may help aid in reversing urban obesity rates, while also helping to improve road traffic accidents." While I have exactly no idea what an "improve[d]" traffic accident looks like, the first clause in the previous sentence gets at the heart of the matter: fast-food critics are using fake nutritional and environmental arguments to make it more difficult for consumers to eat fast-food.

Supporters of drive-thru bans, though, point to a recent study by Canadian researchers. That study, which looked at fast-food drive-thru bans in Canada, concluded such "bans may play a role in promoting healthier food environments."

But the devil is in the details. The most common purposes of the respective bans identified by the Canadian researchers were aesthetic in nature: improving walkability; reducing traffic; protecting community aesthetics; and "urban design." These policy goals were followed closely by reducing air and noise pollution. Unlike the Minneapolis ban—and others here in the United States—none of the 27 Canadian bans included in the study was intended to combat obesity, improve nutrition, or decrease the density of fast-food restaurants.

Critics of these unpopular policies are quick to point out why they don't work. Some argue the bans discriminate against people who are disabled, elderly, or traveling with children, for example. Others note that people will still drive to fast-food restaurants, then sit in their running cars while a family member or friend runs inside to pick up food. Or a driver might drop off a person to pick up a meal and circle the restaurant in their car while that person is in line. In either case, the result is likely more pollution than might have occurred had the driver simply joined the drive-thru queue.

Research has also poked giant holes in drive-thru bans. As I've noted previously—and The Atlantic, Governing, and others have, too—a 2008 Los Angeles ban that targeted fast-food restaurants in South Los Angeles, where roughly nine of every 10 residents is Latino or black—was a disaster. Obesity ramped up after the ban, which critics rightly dubbed condescending, racist, and counterproductive. Slate's Will Saletan called the South Los Angeles fast-food ban "food apartheid."

"We need to be careful not to overstate what these bans can do," Sturm told NPR. "If we want to lower obesity and want people to be healthier, [drive-through bans] are not going to achieve that."

What's more, research published in 2015 suggests people may consume more calories when they dine in restaurants than they do when they order takeout.

Several years ago, I opined that socially engineering food choices is a lousy policy that doesn't work. That's as true today as it was then—even if policymakers continue to ignore the facts. Fast-food drive-thru bans are really just another lame excuse to limit choice while claiming falsely to be combating obesity or protecting the environment.