Democrats Want to Make It a Federal Crime to Threaten Journalists

Sen. Richard Blumenthal would give journalists special federal protections that they don't need. 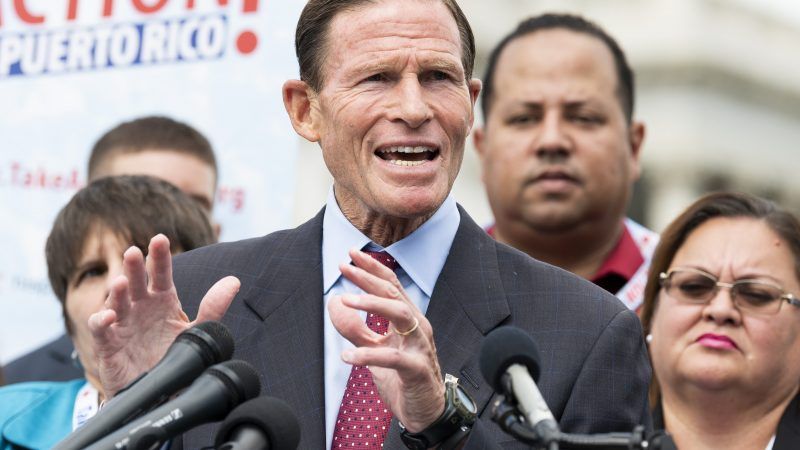 Following reports that a violent parody video depicting President Trump murdering a bunch of journalists was shown at a pro-Trump conference over the weekend, Democrats are calling on Congress to make it a federal crime to threaten or attack members of the media.

To that end, they are revisiting the Journalist Protection Act, which was announced last year.

"I offered this bill last session, before any of these videos surfaced," said Sen. Richard Blumenthal (D–Conn.) in a recent interview. "It is a priority for me to protect news gathering operations, no matter what their form."

Blumenthal explained that the proposed bill would address "the continuing threat of physical violence, whether by guns or other means," against members of the press. His bill is co-sponsored by Sen. Bob Menendez (D–N.J.), and Rep. Eric Swalwell (D–Calif.) has sponsored the House version.

The Journalist Protection Act is a bad idea, for a number of reasons.

First, it should be noted that the anti-media sentiment expressed in the Trump parody video is protected speech. It's vile and offensive, but clearly satire—not a true threat of violence against anyone. The person who digitally transformed the infamous church shootout scene from Kingsman: The Secret Service into a Trumpian Battle Royale is protected by the First Amendment, and any attempt to criminalize such expression would be unlikely to survive judicial scrutiny.

The House version of the bill doesn't actually attempt to criminalize mere threats. Instead, it establishes "journalist" as a protected class, and defines the category very broadly as "anyone engaging in regular gathering, preparation, collection, photographing, recording, writing, editing, reporting, or publishing concerning a local, national, or international event or other matter of public interest." Causing bodily injury to a journalist carries a penalty of three to six years in prison.

Journalists don't need a new law to protect them from violence, though. Needless to say, it is already illegal to cause bodily injury to another person. At best, creating an additional law at the federal level is pointless. In reality, such a law could have the effect of infringing upon the civil liberties of people accused of violence. When something is criminalized at both the state and federal level, or criminalized on several different grounds, prosecutors have additional opportunities to bring charges. In practice, additional charges often give defendants little option but to plead guilty in exchange for a deal: The authorities simply have too many chances to convict them.

When I testified before the U.S. Commission on Civil Rights at a briefing on hate crimes, Commissioner Gail Heriot (a contributor to the Volokh Conspiracy) expressed concern that federal hate crime laws violated the principle of double jeopardy—a person should not be tried twice for the same crime—since they give federal authorities a rationale for pursuing additional charges against a defendant. This could easily be the case with the Journalist Protection Act as well: A defendant could face state charges for assault, and federal charges for assault against a journalist, specifically.

Journalists do important work, and Trump's denigration of the entire "fake news" media as an "enemy of the people" is cartoonishly wrong. But journalists neither need nor deserve special legal protections. Keep in mind that the First Amendment, the most important legal protection of the kind of work that journalists do, does not specifically give these rights to a class of people known as journalists: It prevents the government from violating anyone's rights.