Children, Refugees, and Anyone Booked by ICE Will Have DNA Added to Criminal Database 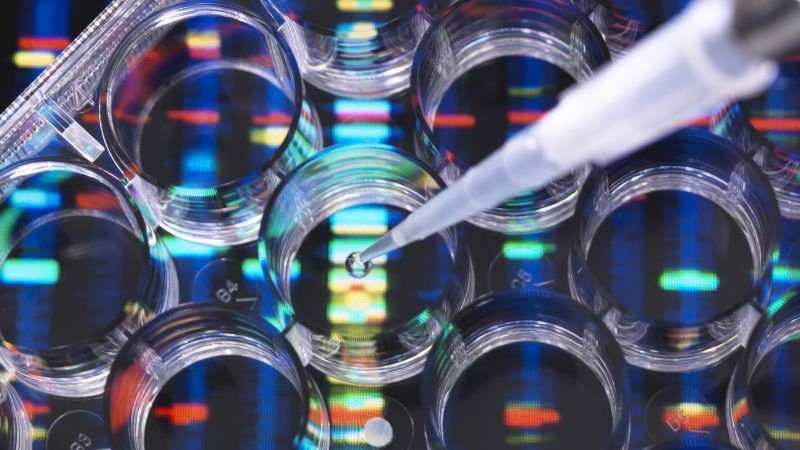 The Trump administration says it will start collecting DNA samples from anyone booked into federal immigration custody. Immigration and Customs Enforcement (ICE) agents will seize immigrants' DNA and then enter it into an FBI database, where it will be stored indefinitely and will be accessible by local, state, and federal law enforcement agents.

Obviously, the privacy violations and potential for abuse here are astoundingly high.

"The US government has a long history of wrongfully targeting people based on genetic composition, from forced sterilizations to marriage prohibition," tweeted the American Civil Liberties Union (ACLU). "The Trump administration's latest move to expand DNA collection should trouble us all."

The plan was first reported by The New York Times yesterday. The Justice Department, the paper said, is "developing a federal regulation that would give immigration officers the authority to collect DNA in detention facilities across the country that are currently holding more than 40,000 people."

"That kind of mass collection alters the purpose of DNA collection from one of criminal investigation basically to population surveillance, which is basically contrary to our basic notions of a free, trusting, autonomous society," ACLU lawyer Vera Eidelman told the Times.

Law enforcement already has rather questionable methods of obtaining and storing genetic data. But it does face some limits, in that it can store DNA only from people arrested, charged, or convicted for certain crimes. Now the population affected will be expanded to include hundreds of thousands more people, including children, refugees who present themselves legally seeking asylum, and people who are at most guilty of civil infractions or misdemeanors.

According to the Times, immigrant DNA samples would be entered into the FBI Combined DNA Index System, which the FBI advertises as a "tool for linking violent crimes."

Parents are suing the Illinois Department of Children and Family Services and several hospitals. After refusing non-mandatory medical procedures for their newborn babies, they say, the authorities either took their children away or threatened to do so. "The babies in the lawsuit were all born healthy and not at risk," writes Megan Fox:

All of their pediatricians agreed that vitamin K and eye ointment could be refused under the law. But the pediatricians were overruled by overzealous hospital staff who called DCFS, resulting in investigations, home invasions without warrants, and extreme stress for the parents.

The lawsuit was filed in federal court in the Northern District of Illinois. You can read the parents' full complaint here.

A Pennsylvania lawmaker wants to legalize marijuana and sell it out of (already state-run) liquor stores. That's a start, and (relatively) good news for folks in the state who want to enjoy legal marijuana. But it won't end the state's war on the drug, and all the attendant problems that it creates. Newsweek reports:

The bill would not decriminalize personal marijuana cultivation or sale in the state. Rather, it forbids "criminal actors"—those who do not work in "legitimate, State-operated stores"—from selling it. In Pennsylvania, both growing marijuana plants and selling more than 30 grams of marijuana are currently felonies punishable by up to 5 years in prison and a fine of up to $15,000, according to the National Organization for the Reform of Marijuana Laws.

Those penalties won't change under the proposal. Same old drug war, only now the cops would be protecting the state's monopoly on sales.

Trump denies that he wants a snake-filled border moat:


Now the press is trying to sell the fact that I wanted a Moat stuffed with alligators and snakes, with an electrified fence and sharp spikes on top, at our Southern Border. I may be tough on Border Security, but not that tough. The press has gone Crazy. Fake News!

Meanwhile, Rudy Giuliani has been discussing the president's legal strategy with an imprisoned Paul Manafort. "The relationship, which Giuliani acknowledged in an interview this week with The Washington Post, stems from a shared interest in a narrative that undermines the rationale for the special counsel investigation," says the paper. "That inquiry led to Manafort's imprisonment on tax and financial fraud allegations related to his work in Kiev for the political party of former president Viktor Yanukovych."

You notice how you hear this floated periodically, but it's never from people who actually work on digital privacy issues full time? That's because it's the one idea everyone with expertise, whatever their other differences, agrees is stupid. https://t.co/2BhUhMNdZE

ICYMI the Seattle Police Department just announced that it has a practice of arresting rape victims in order to protect them from getting raped again. https://t.co/9iTUIEchld

BREAKING: Fed judge in Philly delivers backers of Safehouse, the country's first proposed supervised injection site, a big win in just ruling that the "proposed operation is to reduce drug use, not facilitate it" DOES NOT violate federal drug laws, as Justice Department argues. pic.twitter.com/4tYYfiLrPV

DEVELOPING: We're in Mr. Vapors smoke shop w/ Westland Police. Officers visiting NUMEROUS smoke shops, to make sure they are NOT selling banned, flavored E-cigarettes. Those who violate the order, can face as much as 6 months in prison & $200 fine. ⁦@wxyzdetroit⁩ #4PM #5PM pic.twitter.com/IoJ8P2GfTs

When users stop getting news from Facebook, they don't necessarily start getting it somewhere else.https://t.co/nricnNQExd

"He was solicited from a prominent website used by sex workers" ???? pic.twitter.com/2vz1cDcnlG